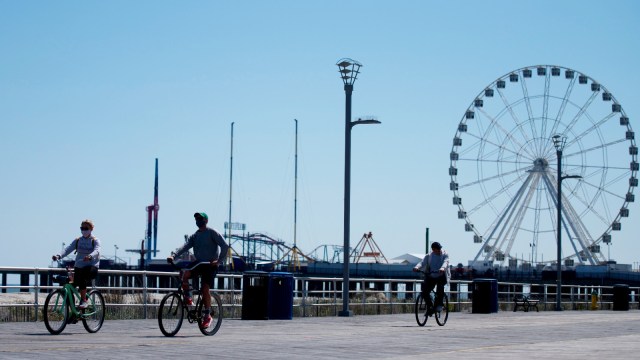 Earlier this week it was reported that production was suddenly halted on MTV’s so-called Jersey Shore 2.0 reboot less than a week after filming began at a rental home in Atlantic City. The original series, which aired for six seasons from 2009 through 2012, was filmed in Seaside Heights, New Jersey.

Initial details were slim, but sources seemed to indicate that a rift may have taken place within the cast, “either they just don’t vibe or there was a behavioral issue.” All MTV would officially state on record was that production had been paused.

However, now, TMZ is reporting that production will not resume for awhile, or at least not at that particular location, as “a ton of equipment” has evidently been removed from the house. Even the rental property next door, which housed producers and crew, has apparently been packed up and cleaned out.

“Sources tell TMZ … production crews were back at the Atlantic City pad Wednesday taking down lights and removing cameras from the home. Our sources say it only took the production crew about four hours to get everything out.

We’re told producers were also seen taking down no parking and permit signs that were dated from the beginning of July to August 6 … and cases were loaded up with gear behind the home. Two security guards were stationed outside the house as producers and crews moved quickly to pack up.”

It would be an extremely costly move for MTV to scrap production this early into filming, so whatever went down sounds like it was probably major. As such, it’s extremely unlikely that we’ve heard the last of this story.

In either case, you know the original cast members are probably taking a long, satisfying sip of tea — or giant margarita with a Corona bottle turned upside down in it, more aptly — as Snooki, JWoww, the Situation, and company previously released a statement to express their disapproval with the reboot.

“As a cast that took a chance with a network in need, we put our most vulnerable moments on television for the world to see,” wrote the current stars of Jersey Shore: Family Vacation. “We gave our all over the past 13 years, became a family and continue to open our lives for the world.”

“So please understand that we are not in support of a version that will exploit our original show, our hard work and authenticity to gain viewers,” the cast added, reminding fans to tune into their spinoff.