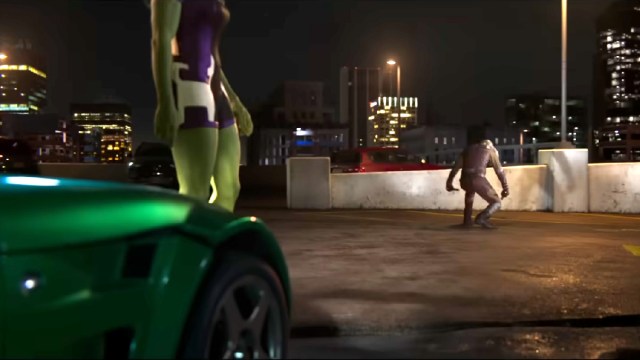 After much rumor and speculation, it was finally confirmed in last night’s brand new trailer for She-Hulk: Attorney at Law that Tatiana Maslany’s title hero will cross paths with the returning Charlie Cox’s Daredevil, who even sports a much more comic-accurate red and yellow outfit.

Of course, there’s already been some minor backlash from sections of the fanbase who would rather not see the star of a hard-hitting, violent, and R-rated Netflix series make his comeback in what’s been described as the Marvel Cinematic Universe’s first half-hour comedy project, but creator and executive producer Jessica Gao did her best to dance around the details about how the superpowered lawyers cross paths when speaking to ComicBook.

“Oh boy, I feel like we’re getting dangerously close to a black bag over my head. Well obviously, what Jen has in common with Matt Murdock is that they’re both lawyers but also, uniquely, they’re both lawyers who happen to be a superheroes, so they have that in common. Wong is a character that has existed in the MCU and knows her cousin.

That’s the thing about Jen is that she, uniquely, unlike everybody else who’s origin story we’re exploring, she is someone who has something like this in her family already. So conceivably, she’s already had to listen to and deal with all of this stuff as a third party family member for years.”

Hopefully we get a more substantial answer in-universe than “because lawyers”, which is about the laziest way to join two dots that are connected in an admittedly obvious fashion. Cox’s Daredevil shouldn’t be a standard quip-happy MCU hero when he returns, so let’s hope She-Hulk brings him back into the fold in suitable style.