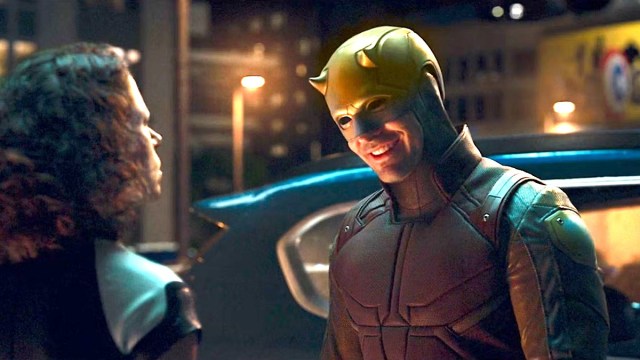 As thrilled as fans are to see Charlie Cox’s Daredevil back as part of the Marvel Cinematic Universe, the number one question on everyone’s lips remains unanswered in an official capacity: Is the three-season Netflix favorite officially recognized as official franchise canon?

Frustratingly, the answer depends on who you ask. Vincent D’Onofrio said he was playing the exact same character in Hawkeye as before, but Cox appeared to debunk that notion by stating his solo series Born Again was unequivocally not season 4, but a brand new thing untethered to the past.

Even Marvel’s own website looked to have cemented the Netflix show as part of continuity, and even as recently as this week the leading man danced around the question without giving anything remotely resembling a definitive answer. It’s a sticky wicket, to be sure, and even the key creatives involved in She-Hulk: Attorney at Law know better than to say anything definitive.

In an interview with The Hollywood Reporter, director Kat Coiro was pressed on whether using notes from the Netflix theme song, staging a fight sequence in a hallway, and recreating several of the Man Without Fear’s signature fighting moves meant the two Matt Murdocks on rival platforms were one and the same, but she didn’t exactly take the bait.

“I will neither confirm nor deny. I leave that to Kevin, but I will say that my cinematographer and I paid great attention to the hallway fights because they’re such an iconic part of the Daredevil that everybody loves. However it plays out in the long run, we had to honor where the character is coming from.

It’s funny, there’s so much talk about the color of the suit, and to me, that’s the genius of introducing a character like the tailor [Griffin Matthews’ Luke Jacobson] because then you see that this is a human being who has to order his super suit. So there can be many variations of that suit, and while the ketchup and mustard pays respects to the comics, there could be other suits moving forward because now we’ve got a tailor to make them.”

Maybe one day we’ll know for sure, but until that day comes, whether or not it’s the Daredevil dispensing justice on Disney Plus is the same as the one who pulverized criminals on Netflix remains firmly open to interpretation.