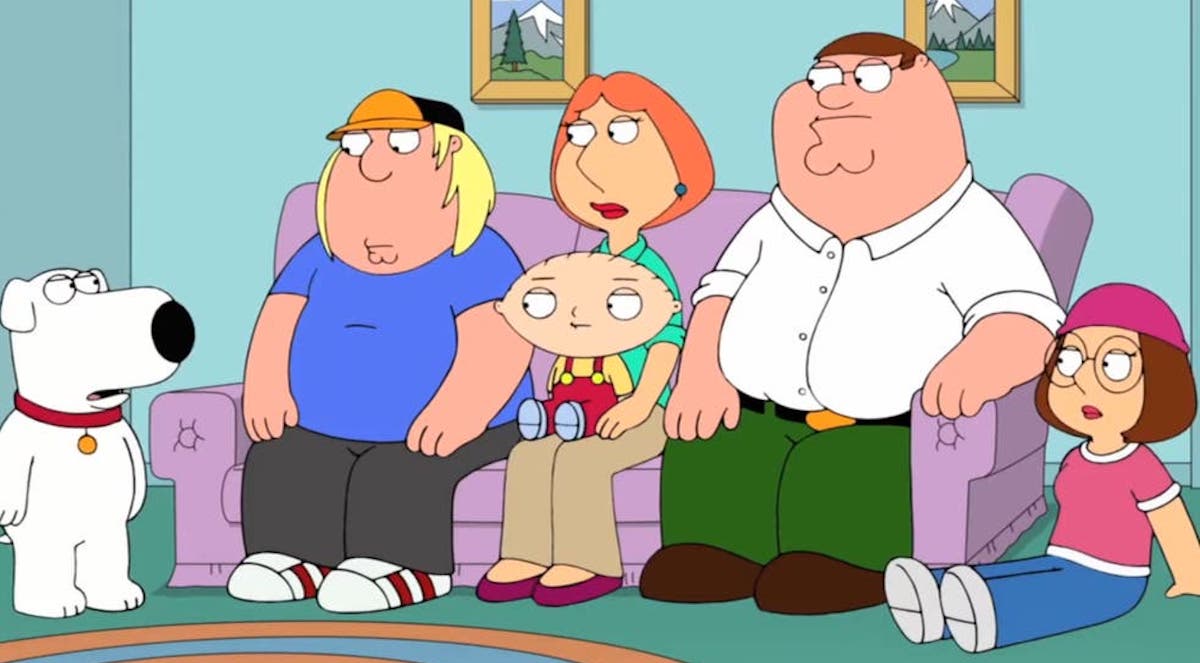 It’s fun to watch a show like Family Guy, since it’s filled with so much raunchy humor and hilarious comedy. The show has gone on for 20 seasons and began in 1999. Even though a lot of the jokes in Family Guy are politically incorrect, fans of the show are rarely ever offended by what they see. The cast is made up of Seth MacFarlane, Mila Kunis, Seth Green, Alex Borstein, and several other talented voice actors.

Rumors about Family Guy getting canceled made their rounds in 2021, but there’s no need to worry about the show’s pending cancellation. It’s already been renewed to last until 2023 –– at the very least. Keeping up with Peter Griffin, his stay-at-home-wife Lois, and their three children provides the hilarity for each episode of the show. Their teenage son Chris is an awkward and clueless dork. Their teenage daughter is a social outcast who has extremely low self-esteem. Their youngest son Stewie is a diabolical genius who has plans to take over the world. Their dog Brian is fully capable of communicating with the humans in his household. Here are some other adult humor cartoons to watch if you totally love Family Guy.

Since The Cleveland Show was made by the same creators who brought Family Guy to life, it’s obvious this show deserves a place on this list. It’s a Family Guy spinoff that focuses on Cleveland Brown. He was once part of Peter Griffin’s social circle, but he relocates to a different state to make things work with his high school crush. Things aren’t so simple for Brown as he tries to transition into his new life though. His flirtatious teenage stepdaughter poses as an issue, and his five-year-old stepson is way too outspoken about wanting to get intimate with women.

American Dad! is another adult humor sitcom that was created by Seth MacFarlane. It first aired in 2005 and has gone on for 17 seasons so far. The show is about a CIA agent named Stan Smith who is dedicated to Homeland security above everything else in his life. At home, he has a ditzy housewife named Francine to deal with, an extremely liberal daughter named Hayley to take care of, and a cringe-worthy teenage son name Steve to worry about. Some of the voice actors in American Dad! include Seth MacFarlane, Wendy Schaal, Rachael MacFarlane, Mike Barker, and Scott Grimes.

Futurama is an awesome adult humor sitcom that premiered in 1999. It lasted for seven seasons, telling the story of a pizza delivery kid who wakes up 1,000 years into the future. He gets frozen accidentally, and his life gets flipped upside down completely. His sole descendent is an elderly scientist who manages a small cargo delivery service. Fry must learn how to fit in with a new society of people, even though he’s accustomed to the lifestyle he lived in the past.

Interestingly enough, he develops romantic feelings for a woman named Leela, even though she only has one eye in the middle of her face. There’s usually always something so interesting about time travel TV shows and movies. Futurama certainly fits the mold when it comes to maintaining the intrigue of what it would feel like to travel from the present day into the future. Some of the voice actors in Futurama include Billy West, John DiMaggio, Maurice LaMarche, Katey Sagal, and Phil LaMarr.

Paradise PD premiered in 2018 and has gone on for three seasons so far. The animated series is definitely intended for a mature audience! The show tells a story of a problematic police department that doesn’t necessarily do their best work when it comes to protecting the people living in their town. The officers have no idea how to properly enforce the laws of their town or keep people safe. Since they are constantly making so many mistakes and getting into so much trouble, there’s no real need for a criminals to venture their way.

Brickleberry premiered in 2012 and lasted for three bizarre seasons. The animated show tells a story of a group of four strangers working at Brickleberry National Park. The park used to be a popular tourist attraction, but lately, it’s been losing its luster. In order to save Brickleberry from closure, Ethel Anderson is invited over to make major changes bringing bright ideas from Yellowstone.

She’s got incredible park skills and to the people working around her, she’s also got quite a bit of natural sex appeal. Since she’s able to bring some great ideas to Brickleberry National Park from Yellowstone, some of the Brickleberry Rangers feel threatened by her knowledge and capabilities. It’s unfortunate Brickleberry didn’t last more than three seasons, since the stories told in each episode of the show could’ve definitely gone further. All three seasons of this show are available for streaming on Netflix right now.

King of the Hill

King of the Hill premiered in 1997 and ran for 13 seasons. The adult humor cartoon is set in Texas and tells a story of a propane sales are named Hank Hill. His wife, Peggy, is a substitute teacher and they live together raising their son Bobby. Bobby is a wannabe comedian, but he hasn’t gotten his big break just yet. Their deadbeat niece, Luanne, also resides in their home. Since Hill is so stereotypically virtuous when it comes to views on his country and religion, he sees the world in a very simple way. For him, most problems can be solved in a very black-and-white manner.

Archer premiered in 2009 and went on for 12 seasons. The adult humor animated show follows a group of agents working at an extremely dysfunctional intelligence agency. Sterling Archer is the main character in the show, but he spends his time interacting with seven of his troublesome colleagues. One of those colleagues is his mother, who also happens to be his boss.

Another one of his colleagues is named Lane Kane, and she also happens to be his main love interest. The voice actors in this show include Jessica Walter, Aisha Tyler, Adam Reed, Ron Leibman, and H. John Benjamin. Shows and movies about spies and undercover detectives are usually a lot more serious than this one. Archer is the type of show you watch if you’re ready for some laughs. It certainly not the type of show that needs to be taken too seriously.

Big Mouth might be a show that opens viewers’ eyes to the details of puberty, but that doesn’t mean it’s intended for a young audience. Going through puberty isn’t an easy physical process for human beings, and the details of purity are explored in this particular show. The show’s main character, Andrew, experiences some of the most embarrassing, cringe-worthy, and intense coming-of-age moments ever.

Some of the voice actors in big mouth include Nick Kroll, Jesse Klein, Jenny Slate, John Mulaney, Maya Rudolph, Jason Mantzoukas, and Jordan Peele. Anyone who’s concerned about Big Mouth getting canceled can rest easy. It turns out Netflix has renewed the hit show to go on for at least another season. This means there are plenty more cringe-worthy stories to be seen about how it feels to get a little older.

F Is for Family

F Is for Family is a Netflix original series that premiered in 2015. So far it’s gone on for five seasons. The show is set in the 70s and tells the story of a man named Frank Murphy who lives somewhat of a miserable life. He had high hopes and expectations for his future, but at a young age, he accidentally got his girlfriend pregnant.

From there, they went on to get married and start a family together, crushing all his hopes and dreams of becoming a pilot. Instead, Murphy finds himself working at the shabby airport, getting bossed around by a terrible manager, and coming home from work every day feeling defeated. Murphy often takes out his frustrations on his wife and kids because he genuinely hates his life.

Bob’s Burgers is a great adult humor cartoon filled with hilarious comedy. Because of that, it’s easily comparable to Family Guy. Family Guy is certainly a lot raunchier and more inappropriate and Bob’s Burgers, but that doesn’t mean Bob’s Burgers doesn’t have its fair share of edgy jokes. Bob’s Burgers tells a story of a third-generation restaurateur who runs a fast-food burger joint with his doting wife and their three children.

All three of his kids are quirky and weird in their own ways, but he genuinely loves them all. Across the street from the burger joint is a competitive pizza restaurant that always keeps Bob on his toes. The show premiered in 2011 and has gone on for 12 seasons so far. It’s been doing so well that it’s even getting its own movie which will be released in the spring of 2022.