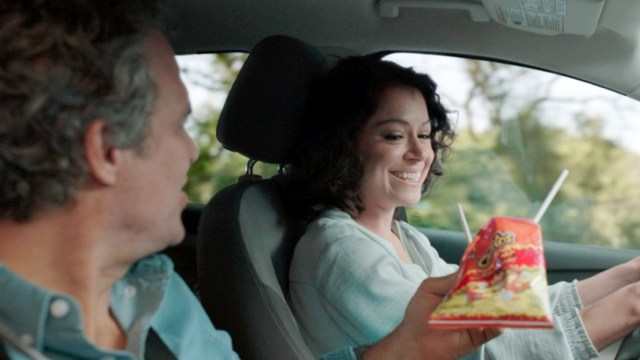 Fans are discussing a scene in the premiere episode of She-Hulk: Attorney at Law in which it is revealed Tatiana Maslany’s Jessica Walters, AKA She-Hulk, enjoys eating Cheetos with chopsticks to avoid getting the infamously clingy orange powder on her fingers.

That may sound like a strange thing to debate. However, when you consider Moon Knight star Oscar Isaac famously became a meme for consuming a rather spicey variety of the snack in just the same manner, back in 2016, it calls into question where the Marvel Cinematic Universe canon ends and where real-life begins.

After all, how could She-Hulk have been inspired by Isaac when that very actor exists as Marc Spector, AKA Moon Knight, within the MCU?

“NO WAY MARVEL DID THIS. #SheHulk,” one fan wrote on Twitter, pointing out the seemingly irreconcilable continuity.

Another commentator went on to discuss the implications of the MCU’s canonicity and how that seemingly intersects with real life. Might Oscar Isaac the actor merely be one of Marc Spector’s multiple personalities in the MCU?

Another Marvel fan was disappointed to find out the supposed Moon Knight cameo in She-Hulk was simply a nod to the Cheeto gaff.

One Twitter user’s explanation conveniently reconciles the MCU’s canon with the nod to a real-life meme. Since She-Hulk is a character who can “break the fourth wall,” by addressing the audience directly, that would seem to imply she could also make references to real-life trends in pop culture. Hey, if Deadpool can acknowledge both Hugh Jackman and Ryan Reynolds in his titular 2016 film, as a fourth-wall-breaking Marvel antihero, why can’t Jessica Walters?

Although eating the infamously finger-staining snack with chopsticks is arguably self-explanatory, Isaac nevertheless confirmed in a 2018 interview with Jimmy Kimmel that he used chopsticks to eat the Flamin’ Hot Limón variety of Cheetos so as not to “get the powder on my fingers,” as the Huffington Post diligently reported.

You can check out the first episode of She-Hulk: Attorney at Law, in all its chopstick-Cheeto-eating-glory, on Disney Plus now.