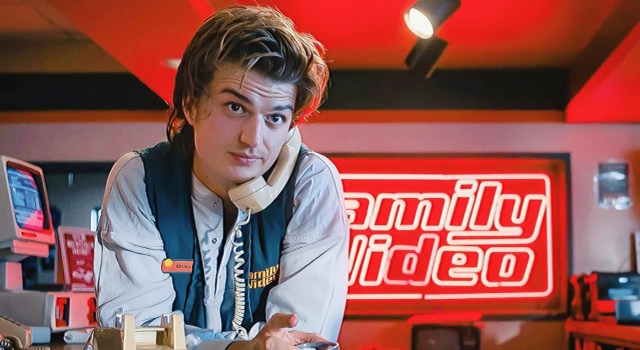 The unexpected hero’s journey of Steve “The Hair” Harrington is easily one of the best things Stranger Things has given us, with the former jock turning into the internet’s favorite mom (and yet, at the same time, daddy). After he thankfully made it out of season four intact, fans are now praying that Steve will get a happy ending in the show’s fifth and final season. That is assuming there’s actually time to check in on his personal life?

Creators the Duffer brothers told Collider that viewers can expect season five to hit the ground running, which means there won’t be any time for the usual slow-burn reintroduction to the characters that the last few runs have had. For instance, ST4 kicked off with Steve being unlucky in love, before he struck up a connection with old girlfriend Nancy. Whether Stancy will become a thing again was left open-ended, but it’s possible there just won’t be the room to resolve this in ST5. As Matt Duffer explained:

“Season 5 is going to start pedal to the metal. We’re not going to do the ramp-up. There’s no time. There’s no normalcy, obviously, once you’ve reached the end of four. That’s not like there’s going to be time to explore our characters’ love life, and how is Steve’s dating going? There’s going to be none of that, it’s just going to be going 100 miles an hour from the beginning.”

To be honest, fans might not be all that fussed over Steve and Nancy’s rekindling romance going nowhere as it didn’t turn out to be the most popular of plotlines. It didn’t help that folks were far more interested in Steve and Eddie as a duo or Nancy and Robin potentially becoming girlfriends. Plus, Natalia Dyer has indicated that she wouldn’t be particularly thrilled if her character’s whole arc came down to a love triangle.

Having said that, the smaller character interactions and romantic moments are often the fans’ favorite parts, so the Duffers’ promise that they’ll be cutting right back on those in season five is a little worrying. Sure, the idea of wall-to-wall action and intrigue is thrilling, but we don’t want to lose the series’ heart along the way. And Steve arguably is the heart of Stranger Things at this point.