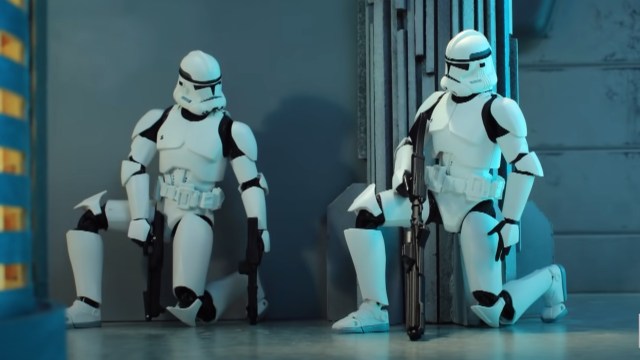 The story in Star Wars can get messy at times, but the internet’s latest discussion takes things to a whole new level.

The franchise is well known for absolutely drenching fans with fresh content, which has helped immensely in fleshing out the broad and complicated Star Wars galaxy. Many of these zero in on specific moments or events in the story’s canon, providing a deeper look at the lore and characters that made this behemoth franchise what it is.

Some of the most popular characters among longtime Star Wars fans exist largely in the background. For fans of the Clone Wars and Rebels television shows, in particular, the clones that persisted as allies to the Jedi for years — before flipping, thanks to implanted chips, and joining the Empire — are a huge draw. These identical characters proved, over the course of multiple seasons and several films, to boast a surprisingly rich and diverse array of personalities and skills.

The conversation was prompted by a meme from user ElanorMarr, who used an image from The Emperor’s New Groove to point out that “the prequel trilogy is the only trilogy without incest.” This predictably sparked a passionate discussion, as people both identified the incest in question and pondered other potentially concerning aspects of the many Star Wars relationships.

If the first question you find yourself faced with is “what incest cropped up in the sequels,” you’re not alone. The top comment on the thread poses this question, and fans flooded its responses with the same example of weird, confusing incest. See, Emperor Palpatine technically created Anakin Skywalker through the Force (and sheer audacity), which links the eventual Sith Lord back to his master in blood (or midichlorians, at least) as well as loyalty. And, since Palpatine is also related to Rey, that makes both halves of the sequel trilogy’s eventual dyad Palpatines, in some shape or form.

That makes that kiss in Rise of Skywalker a bit more awkward, but no more awkward than the kiss shared between actual twins Leia and Luke. It also technically proves ElanorMarr’s post correct, despite plenty of complaints from commenters.

The question to end all questions. Clonecest soon became the dominating conversation on the thread as people pondered the very complicated question of replicated genetics and romance. The clones, notably, view themselves as brothers — and refer to one another as such — which would make a relationship between two of them all the more complicated, but they also have little interaction with anyone outside the “family,” as it were, for large chunks of their lives. Unless the Kaminoans somehow managed to remove sexuality from their genetic codes, it seems likely that a few clones definitely got it on at some point.