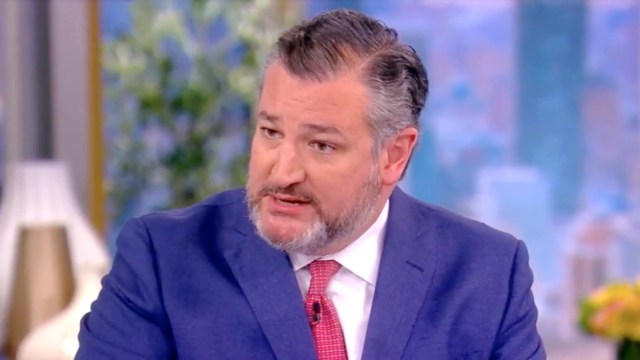 Sen. Ted Cruz waded into enemy territory twice within 24 hours, appearing on The View on Monday morning after he was booed and jeered out of the American League playoff game between the New York Yankees and Houston Astros in the Bronx on Sunday night.

Fortunately for Cruz, his appearance on The View was met with somewhat less hostility than he experienced from fans at Yankee Stadium — though, not by much.

In fact, right out of the gate, climate change protesters nearly derailed the interview, interrupting Cruz as he attempted to talk about inflation, which was not what he had even been asked about. (Sara Haines had in fact asked Cruz how it’s OK that reproductive rights can vary from state to state, which he not shockingly dodged.)

The interruption forced the panel to go to a commercial break, but when they returned to the studio, Ana Navarro asked the question that’s been on everyone’s minds since 2016, when Cruz and Trump were facing off ahead of the Republican primary elections and the former president made some uncouth remarks about the senator’s father and wife.

To Cruz’s credit, he actually handled the “loaded question,” as he described it, fairly well, all things considered, explaining that he had a job to do and he couldn’t very well refuse to do his job because he was unhappy with the way the primaries shook out. That’s not to say that Cruz is necessarily good at his job or that his policies are admirable, but it was a reasoned response, nonetheless.

“Those are real results that make a real difference and I’m proud of that record,” explained Cruz. “And why did I choose to work with him even though I was pissed off at what he said? Because I had a job to do and I had a responsibility.”

However, any goodwill Cruz earned himself during that line of questioning was later burned when the panel brought up the subject of the Jan. 6, 2021 insurrection at the U.S. Capitol building. The 53-year-old quickly got defensive and shouty while attempting to deflect election denying onto Democrats, even making the questionable comparison to an “entire year of Antifa riots.”

Naturally, that did not sit right with panel moderator Whoopi Goldberg, who fired back with: “I don’t know what an Antifa riot is.”

At that point, Navarro, who was sitting directly to Cruz’s right, was beginning to lose her cool with the yelling in her ear.

“You just said we don’t scream at each other, right? Or is it just you who gets to scream?” Navarro shot back at Cruz, who conceded. “OK. Then lower your voice because we are very close to each other. I know you come here to sell a book and try to pick a fight, but we’re not going to do that today.”

For those who can stomach it, you can watch the entire segment below: