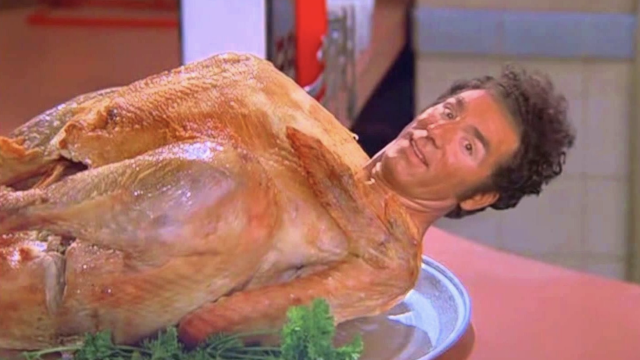 Before Mariah Carey and her iconic Christmas anthem fully defrost in time for the holiday season, it’s important to allow an ever-popular celebration like Thanksgiving to have its moment in the spotlight. As Turkey Day rapidly approaches, there’s no better form of preparation for festive fanatics than sitting down in front of the television and adhering to a variety of unforgettable holiday episodes — many of which were made popular during the soaring ‘90s. As television stans already know, the ‘90s was one of the best ages for television, with series like Friends, The Sopranos, and The Simpsons absolutely dominating.

And seeing as how the common elements surrounding Thanksgiving are family, food, and feel-good moments, it’s certainly no surprise that many of these shows incorporated a few specials inspired by the stomach-growling holiday. So, before you unbutton your pants after that otherworldly Turkey Day feast, let’s take a look at the 10 best ‘90s family sitcom Thanksgiving episodes, ranked.

You can’t comprise a list of the best ‘90s sitcom episodes without including the ever-popular comedy series Will & Grace. And while the conventional episodes in the show are hysterical enough, then it’s surely no surprise that the out-of-this-world Thanksgiving special would find a home on this list. In the episode, Jack informs the rest of the gang that his mother Judith is paying a visit for Thanksgiving. The only problem is, Judith has no clue that her son is gay. It’s a gut-busting episode that will certainly get you in a ‘giddy’ mood for the holidays.

There’s a slew of Everybody Love Raymond Thanksgiving episodes to gush about, but “No Fat” definitely takes the cake. In the season 3 episode, Ray is up in arms after his mother Marie decides to abandon the traditional choice of turkey for Thanksgiving. Instead, Marie opts for a Tofurkey (a tofu turkey), which leaves Ray completely speechless. It’s an all-around entertaining episode packed with plenty of laughs. The best part? It’s perfectly appetizing to the vegetarians of the world.

Without a doubt, Family Matters is one of the most underrated sitcoms of any decade, and definitely deserves its moment in the spotlight. Surprisingly, the best Thanksgiving episode came extremely late in the series’ run, occurring during the show’s penultimate season. In the chaotic episode, Urkel’s girlfriend Myra volunteers to bake a special chicken-inspired dinner for Carl’s police banquet. Unbeknownst to Myra, she mistakes innocent pepper flakes for fireworks, sprinkling the hazard all over the chicken, which eventually blows up during the banquet. The episode is a gut-busting experience that will leave you laughing even days after watching.

Truth be told, the vast majority of episodes from That ‘70s Show are chaotic and unruly — which makes sense, seeing as the ‘70s were definitely an unpredictable time. Nevertheless, the Thanksgiving episode of the series is arguably one of the wildest pieces of television ever broadcast. In the topsy-turvy episode, all hell breaks loose when Laurie brings home a flirtatious friend from college who tries to seduce Eric, much to the obvious displeasure of his girlfriend Donna. It’s an endlessly funny episode that will leave you in tears (and full of stuffing, probably).

Before Will Smith was slapping Oscar hosts, he was captivating our attention as the Fresh Prince. From absurd scenarios to intriguing characters, it’s no wonder that The Fresh Prince of Bel-Air proved to be one of the most successful shows of the ‘90s — and its Thanksgiving episode is arguably the craziest experience. In the special, Will’s mom Viola visits the Banks’ house for the holiday, although she has trouble coming to terms with the fact that Will is happy and healthy in a new home. In the end, the episode proves to be a heartwarming encounter that pushes forward the importance of family.

You’d be hard-pressed to find someone that would argue with the glaring fact that Frasier is one of the most underrated television gems from the soarin’ ‘90s. And, truth be told, it would be an understatement to say that Frasier boasted some of the very best holiday specials on TV. In “A Lilith Thanksgiving,” Frasier’s ex-wife Lilith requests his presence to help their son get accepted into a prestigious university. Along the way, the show’s leading characters engage in a rambunctious adventure full of humor, family, and lighthearted fun. Plus, any episode featuring Niles is an episode worthy of a watch.

As one of the most celebrated animated sitcoms in the history of television, it comes as no surprise that The Simpsons would land directly near the top of this list. In arguably one of the best episodes of the entire show, an altercation between Bart and Lisa results in Bart refusing to apologize and running away from home. However, when Bart eventually overhears his sister crying, he decides to apologize for his mistakes and the family reconciles. It’s an oddly touching episode in a series with an abundance of comedy, but it definitely rings in as one of the best of the ‘90s.

One of the most obvious elements in the Full House ethos is the importance of family, which is often echoed through plot points surrounding the beloved Tanner clan. And while the majority of the show’s episodes inhabit a particular touch of emotion, the Thanksgiving episode is undoubtedly a roller-coaster ride of affection. In the episode, the gang must endure their first Thanksgiving without Danny’s wife Pam, who died in a car accident prior to the show’s pilot episode. Despite the characters’ grieving, a plethora of humorous moments occur between the show’s leading cast, which results in a heartwarming episode that deserves a watch this holiday season.

Interestingly enough, when the topic of Friends is brought up at Thanksgiving, you’ll find that the series divides your relatives in half — with the consensus that either you love the show or you hate it, depending on personal taste. Nevertheless, it’s hard to discount Friends as one of the hottest television shows of the ‘90s, with an array of Thanksgiving episodes that undoubtedly added to the show’s general likability. In this Thanksgiving special, the “Friends” sat around and reminisced on their wildest Thanksgiving memories — many of which included the characters at a much younger, more impressionable age. It’s a wildly entertaining episode, even if you’re not a fan of the show, that leaves you absolutely in stitches.