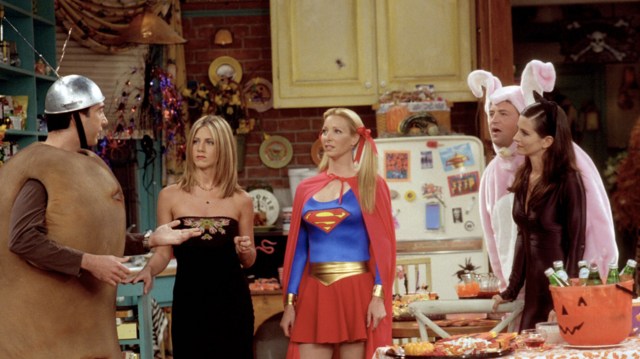 As the air turns a tinge cooler and bright colors start combing the landscape — and stores start stocking those spooky items way too early — it’s time to turn our attention toward Halloween!

Going hand-in-hand with thinking about our own costumes, comes the annual tradition of watching some super cool Halloween episodes of our favorite shows. While obviously we can recommend just about any Treehouse of Horrors episode from The Simpsons, or any number of the brilliant times Brooklyn 99 or Bob’s Burgers take on Halloween, to say nothing of actual scary episodes and shows, there’s a lot to ingest out there.

Maybe it’s to get in the spirit, or to glean some costume ideas for ourselves. Whatever the case may be, it’s a fun time of the year.

One show that will pop up in our minds is the show that seems to never fade away — Friends.

The iconic and landmark comedy series had plenty of episodes based around a theme and holidays, but what about Halloween?

Remember “The One With the Halloween Party?” Super classic episode and fashionable costumes to boot.

Oh, and there’s also The One With…um, you know, that one time they…that other Halloween episode when Phoebe…no wait, was it Ross?

I’ll be damned. Friends only had one, yup just one, Halloween episode.

So, instead of ranking the nonexistent plethora of Friends Halloween episodes, here’s a ranking of the best costumes worn by our favorite characters from the hit series!

What is the Friends Halloween episode?

Not only did Friends take on the costume-clad Halloween one measly time, it wasn’t even until the eighth season!

If you’ve seen the show once (or 22 times like plenty of Friends fans out there), the costumes the gang wears probably appear in your mind pretty fast.

So, our best option is to explore those memorable costumes.

Which costume was your favorite? Which was the most memorable? Which one would you sport this year? Let’s look at them again.

We’ve got two right off the bat that fit into the thematic universe of movies and shows and the entertainment world right away.

The self-proclaimed hostess with the most-ess, Monica (Courteney Cox) dons an all-black Catwoman costume as she tries, as always, to throw the perfect party where everyone is having the time of their lives.

The thing is, it’s a great costume, then and now, obviously. With Zoë Kravitz recently taking on the iconic role in last year’s The Batman, the Catwoman costume is almost definitely going to be showing up in lots of places this October. The cool thing is, a Catwoman costume can be as special and unique as you want and it’s one of the cooler superhero costumes because of that. Then just as now, it can range from an easy one to pull off with some black, some cat ears, and probably some tights, to something you can add layers and even sew yourself (we know a Catwoman who did just that) to in order to customize your own Catwoman costume.

Superhero costumes on Halloween have always been in vogue. Phoebe (Lisa Kudrow), who has a side story about her twin sister, Ursula, and the latter’s boyfriend, Eric (played by Sean Penn), whom Phoebe has invited to Monica’s Halloween party. This results in, naturally, identity confusion and Eric mistakenly thinking that Phoebe is Ursula at one point.

Though the CW show Supergirl just came to an end late last year, on Nov. 9, 2021, to be exact, the Supergirl costume is also one that won’t go out of style. Though it requires less creativity than Catwoman, as you can usually just buy the outfit and put it on, it’s still cool, nonetheless. If you wanted to, since superheroes seem to have subtle (and not so subtle Batman nipples) changes to them with different eras and actors, you certainly could craft your own Supergirl costume, too.

Leave it to the science geek to come up with something clever, and actually pretty cool, that most people won’t get.

You take the first artificial satellite ever sent into orbit —Sputnik — and combine that idea with a potato — a spud, if you will — and bingo, you’ve got the “Spud-nik” idea. While it might seem a bit cringeworthy, especially coming from the relentlessly cringeworthy Ross (David Schwimmer), we think it’s clever as hell. Putting some creativity into a costume is always cool in our book, and it usually will get people talking — and talking to you, as they are curious just what the hell you are. Plus, if you’re single, it’s a great way to break the ice with anyone. And, anyone who digs your idea, well, that’s always a great thing!

4. Chandler as a pink bunny

Not the most creative or artistic of the bunch, Chandler (Matthew Perry) winds up in his classic bunny outfit because Monica suggested it to him. Clearly, it’s a tribute to Ralphie from A Christmas Story, and although it might be dismissed at first, it remains a cool costume. It’s an easy one to figure out as well, kinda like Supergirl — you just need to find somewhere to buy the outfit. Or, of course, you could make one yourself, if you’re into that kinda thing. Leave the nose off though, since it’s not as cool.

Either people will recognize it and love it, or they’ll not know what the hell you’re talking about and then it’s your duty to show them the movie A Christmas Story right there, on the spot, on Halloween.

“You didn’t dress up either?” asks Monica.

You could recreate the costume and even the moment if you wanted to. Though not as many people might get it as they would have a decade (or two) ago, it’s not hard to find a configuration of clothes that screams, “I’m Chandler.”

You could even peruse several Friends episodes and try to recreate one in particular, which, depending on your ingenuity, could be easier than a random one or a bit more difficult as you’re limited to what you can find/buy.

6. Rachel as her pregnant, classy self

With the knowledge that she’s pregnant and won’t be able to wear some of the outfits she has now, Rachel (Jennifer Aniston) decides screw it, and ditches the costume idea altogether to wear something she just wants to wear.

As the episode goes on though, it’s all about her transition away from the vision she had of herself and the one that she will become, as a mother. She instantly loves giving the trick-or-treaters candy, but of course that devolves and she ends up questioning if she will be a good mother.

For sure, though, if you don’t wanna dress up or just dislike Halloween, the classic not dressing up but telling people you actually did dress up is something just about anyone can pull off.

There y’all have it! Now, set up some arm-wrestling competitions for prizes at this year’s Halloween party, and maybe even set is as a Friends theme, or better yet, a friends theme, and see the creativity it sparks in your own friends.