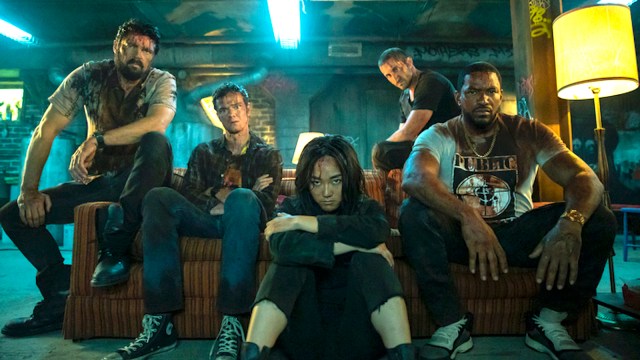 There is perhaps not a single show today that employs graphic shocks quite as frequently or effectively as The Boys. Whether it’s going neck-deep into whale guts or Termite’s frisky adventure gone wrong, it seems like the show takes every opportunity to ensure it would never make it to cable.

It comes as a bit of a surprise, then, that something as relatively tame as a nude scene (excusing the copious amount of fake blood) was something that had to be pushed for.

Episode six when Little Nina catches Frenchie – originally, Frenchie was supposed to be with, I think, dirty undies or something like that. And I was like, ‘No, he should be naked’. To me, it looked like the right thing for the scene.

The scene in question involves Frenchie being brought into a warehouse, where Cherie and Kimiko, two women he cares for deeply, are already tied up. Bleeding and humiliated, Frenchie is forced to choose which of the two women gets to live, but Kimiko manages to break free and lay waste to their captors, allowing everyone to escape.

Capone did manage to get his nude scene in the final cut, but for a show, nay, an episode, that featured a full-on superhuman orgasm, it’s surprising that he had to even suggest it.

The Boys is currently streaming in full on Amazon Prime Video.