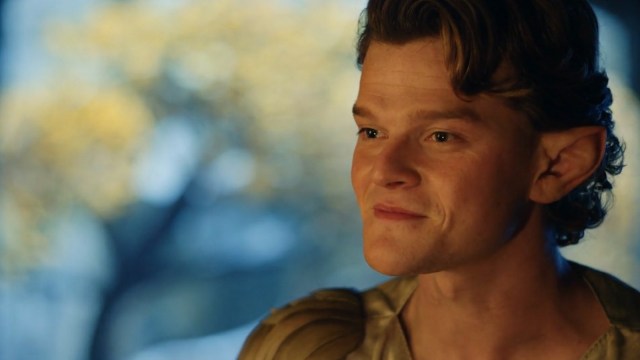 The Lord of the Rings: The Rings of Power star Robert Aramayo shares what it’s like to embody one of the most notable Elves, Elrond. The Amazon Prime Video prequel series takes place in the Second Age, where Elrond is a younger stateman and not yet the Lord of Rivendell. Undoubtedly, these are big shoes to fill for the actor.

In an interview with Collider, Aramayo described how he used the pressure to fuel his performance.

“Yeah, there’s no doubt it’s a really big undertaking and it can be overwhelming, but I think that’s true for Elrond, as well. He’s at a point in his life where the most famous deeds that he would be known are that of his family. He’s in a situation where his brother created a country, essentially. His parents saved the world. That’s a lot of pressure on him. At certain points, it’s useful in lots of ways. It’s intimidating and scary, wanting people to like it, but also Mr. Tolkien and what he intended. I really love Elrond and I’ve always been super interested in him. Whilst I’m his custodian, I just wanna do the best I can.”

In Peter Jackson’s The Lord of the Rings trilogy, Hugo Weaving played Elrond, and he left an indelible mark on the story. He put together a council and decides that the Ring must be destroyed, which sends Frodo and his fellowship on their journey, and he’s the father of Arwen (Liv Tyler) who eventually marries Aragorn (Viggo Mortensen).

Aramayo’s Elrond is much younger than Weaving’s, and he’s yet to accomplish all the great deeds he will in the future. When King Gal-galad is giving his speech to the elves before they depart for Valinor, Elrond is seen mouthing the words, implying that he’s the one who wrote the address. In episode two, Elrond aids in Celebrimbor’s quest to construct a great tower by using his connection to the Dwarves.

It’s not only Aramayo that feels the pressure but his character Elrond does too in the form of his brother Elros’ massive accomplishments. Rings of Power episode three, “Adar” shows the grandeur of the island kingdom Númenor. As it turns out, Elros was the first king of Númenor and his descendants are still alive in the show. It’s quite a legacy to live up to, and he’s probably hoping Celebrimbor’s tower will lift him out of his brother’s shadow.

In the episode, a mysterious new figure in the series is revealed. The villain’s name is Adar, the same as the title of the episode, and he’s certainly going to cause some serious problems for the heroes.