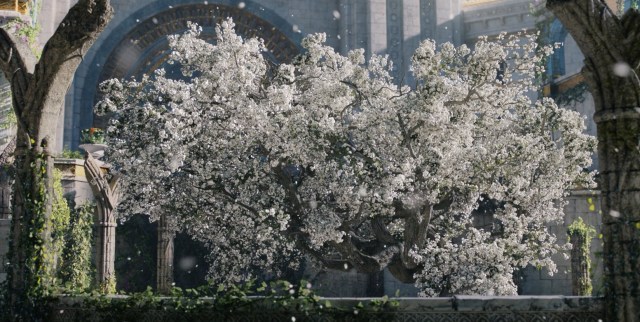 With the debut of Númenor in Amazon’s The Lord of the Rings: The Rings of Power and its greatest city, Armenelos, fans once again bore witness to Nimloth the Fair, the White Tree of Kings, and ancestor to the White Tree of Gondor in Minas Tirith. But what is the history of the tree and what is its significance in keeping the sovereignty intact?

In the third Lord of the Rings book, The Return of the King, the White Tree of Gondor has withered, a symbol of the broken line of kings. Gandalf believes that when the true king returns, the White Tree will bloom once more, heralding a new golden age of dominion for men. Is that tree the same as the one we see in Rings of Power‘s Armenelos?

To answer that, we have to go further back in Arda’s history to the time when the Two Trees of Valinor gave the world its light. When the Black Foe, Morgoth, destroyed the Trees and covered the lands in darkness, it was a devastating blow to the Ainur’s glory, who were the greatest of the creator’s angels. One of them, called Yavanna Kementári, or Queen of the Earth, bore another tree into the world with the seed of one of the Two Trees, though unlike them, this new sapling had no light of its own.

Galathilion, it was called, a Quenya word which translates to the White Tree or the Tree of Silver. When the War of Wrath concluded and the Black Foe was defeated, the Elves of Tol Eressëa gifted a seedling of Galathilion to the king of Númenor, and they planted the tree in Armenelos and called it Nimloth, to serve as a symbol of their strength and loyalty to the Valar.

Nimloth and the White Tree of Gondor

In the latest Rings of Power episode, Nimloth is already withering away. Many Numenoreans interpret it as a warning from the Valar that their greed might be getting the better of their faith. Miriel and his father, the king, believe that when the petals of Nimloth have been swept away, the downfall of Númenor will come.

Of course, we already knew that the fall of Númenor was one of the things to be depicted in Amazon’s adaptation. With Isildur already being a character in the show, we’ll no doubt see how the White Tree of Gondor came to be as well.

The withered tree you see in Return of the King was planted with the sapling that Isildur stole from Nimloth before its destruction. When he and his father, Elendil, came to Middle-earth to found the kingdoms of Gondor and Arnor, Isildur planted the first tree in Minas Ithil, with the second and third finding root in Minas Anor and its later counterpart, Minas Tirith.

Just like Nimloth in Armenelos, the White Tree of Gondor also withered when the line of kings was broken. With the return of Elessar (Aragorn) the tree bloomed once again, and the king reunited the kingdoms of Gondor and Arnor again, rebranding Minas Tirith (Tower of the Guard) as Minas Anor (Tower of the Sun) once again.

As far as its heredity is concerned, though, the White Tree of Gondor came from Nimloth, itself a fruit of Galathilion, which was planted by Yavanna from the sapling of the Two Trees of Valinor.