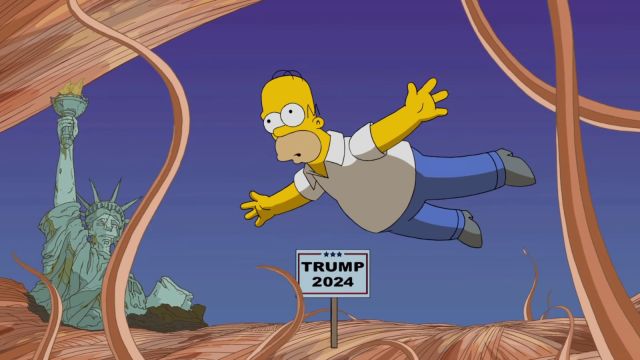 They say a broken clock is right twice a day, but for The Simpsons it seems to be right all the time. The beloved animation series famously predicted Donald Trump winning in 2016, and people have just realized that they predicted him running again in 2024.

Gifted with the ability to see into the future, The Simpsons writers have once again taken a glimpse and given us all a warning for what will inevitably happen. Confirmed yet again today by showrunner Al Jean, they managed to predict Trump’s return to the campaign race for the 2024 elections.

Back in 2015, a short was released from The Simpsons called “Trumptastic Voyage” which birthed the famous escalator scene, and saw Homer travel through Trump’s brain and hair, finding a campaign sign which flicked up four years every other second. The joke clearly being Trump will likely never give up his aspirations to be president.

The Simpsons, even though it arguably doesn’t have the same audience impact it once had, it still remained a huge critic of Trump during his presidency. Trump as a character borders so much on becoming a parody of himself, he’s incredibly hard to satirize well. It’s like making fun of The Simpsons itself.

Jean being so quick to post out their prediction being right again also shows how easily forecast the presidential return was for nearly everyone. Trump returning was an inevitability, and something the world should’ve been better prepared for.

The “Trumptastic Voyage” short can be viewed on YouTube, with the rest of The Simpsons anthology available to stream on Disney Plus.