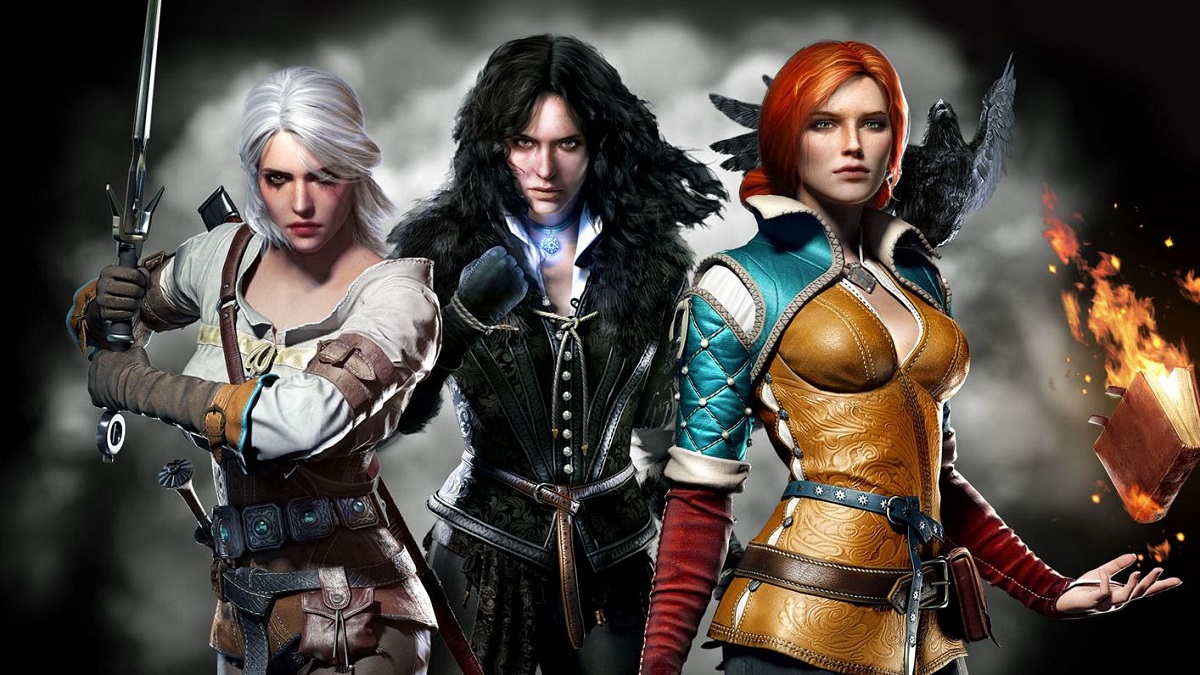 Despite only boasting seven books — and short ones, at that, considering the conventional length of the fantasy novel — the world of Andrzej Sapkowski’s The Witcher has many political undercurrents, and the magical school of Aretuza, housing the Conclave of Mages, sits at the heart of them.

After the Thanedd coup, a band of female mages founded the Lodge of Sorceresses to monitor and protect Princess Cirilla, but even long before the most powerful of their number joined the effort, their influence constantly caused upheavals in the relationship between the Northern realms. From whispering into kings’ ears as their counselor to actively participating in battles, and even devising plans to manipulate the course of events for millennia, we’ve ranked some of the most powerful and influential sorceresses in the history of the Continent and the Witcher story.

You might find Visenna’s inclusion in this list confusing, as she has neither participated in any prominent events nor influenced the world at large. Of course, that’s barring the obvious, which is giving birth to one Geralt of Rivia, the titular protagonist of the story. Visenna was a druid healer, who took her son Geralt to Kaer Morhen when he was a boy.

Visenna makes one last appearance in The Sword of Destiny, tending to Geralt’s wounds when he is on the brink of death. The monster hunter recognizes his mother and tries to ask why she left him, but Visenna never gives him the chance. Geralt thinks it might be for the best.

Netflix introduces Sabrina early on in the first season, so we can only imagine what they plan to do with her character in the show. As far as the books are concerned, though, Sabrina is a relatively minor character, though as deft a manipulator as many of her peers in the Lodge of Sorceresses. During the Thanned Coup, Sabrina is among those who help arrest the Nilfgaardian traitors. Even in Netflix’s The Witcher, the character plays an important part in the attempt to push back the Nilfgaardians at Sodden Hill, which means that there can be no question as to where her true loyalties lie.

Fringilla was a sorceress in the employ of the Nilfgaardian empire. She fought against Yennefer in the Battle of Sodden Hill, but was later approached by Assire var Anahid, who offered her a seat in the newly established Lodge of Sorceresses. Fringilla was also the second cousin of Anna Henrietta, the Duchess of Toussaint, whom The Witcher fans recognize as a main character from the Blood and Wine DLC.

When Geralt and his party reached the province, Fringilla seduced the Witcher into her bed, and the two began a romantic entanglement that lasted for the remainder of his stay. Fringilla tried everything in her power to keep the Witcher in Toussaint, and though he developed some feelings for her, his love for Yennefer would not be overcome. Fringilla tried everything in her power to make the Witcher stay, but when Geralt learned Ciri’s whereabouts, the party made for Stygga Castle with all possible haste.

Francesca Findabair is already a prominent character in Netflix’s The Witcher. Called Enid an Gleanna, or Daisy of the Valleys in the Elder Speech, she was an Elven sorceress and the queen of the Dol Blathanna elves. Francesca helped the mages of Thanedd when they attempted to thwart Nilfgaard’s invasion of the Northern Kingdoms and fought alongside them during the Battle of Sodden Hill.

Francesca is going to play a huge part in the future of the story, and if the Netflix adaptation remains faithful to the books, the Daisy of the Valleys is also going to save Yennefer’s life on one occasion. Francesca is also a founding member of the Lodge of Sorceresses, which will take up the Brotherhood of Sorcerers’ work after the infamous Thanedd coup, the events of which we’ll see in The Witcher season 3.

Keira Metz was the former advisor to King Foltest of Temeria and played a pivotal role in the events of the Thanned coup. We have yet to see her in the Netflix adaptation, but the sorceress will no doubt be making her debut in the second half of season 3. Keira is one of the first to learn about a Nilfgaardian plan to overthrow the Brother of Sorcerers, so she hatches plans of her own with some other fellow sorceresses to prevent it.

Years later, during the events of The Witcher 3: Wild Hunt, Geralt visits Keira, who is hiding out in the no man’s land of Velen to avoid Radovid’s witch hunt. Keira helps Geralt shed light on Ciri’s time in Velen, and she later joins the effort to fight Eredin’s spectral riders at Kaer Morhen. Based on the player choice, Keira and the Witcher Lambert might end up developing a romantic bond. The sorceress is also present when the party, joined by Emhyr’s legions, fight off the Wild Hunt one last time in Skellige.

In terms of political maneuvering, no mage in the Witcher world can compete with Phillipa Eilhart. She was the mage who led the Northern resistance against the Thanned coup, which caused a great battle on the island. Even before the fateful events of that day, Phillipa helped Geralt and Jaskier (Dandelion) locate Rience, who was hunting Ciri at the time.

Eilhart is deeply embedded with the Redanian spymaster Dijkstra’s plans, though the ends they pursue might differ from one another. The two are romantically involved and can be seen hatching political plans numerous times during the course of the story. Phillipa is a major character in The Witcher game trilogy, and while she may come off as a manipulator looking out for no one but herself and her political agendas, she ends up helping Geralt, especially when it involves Ciri, more than once.

We’d be remiss to not bring up Lara Dorren when talking about the most powerful and consequential mages in the history of the Continent. She was Ciri’s ancestor after all, and the person whose actions changed the course of history forever.

Lara was an Elven mage who carried Hen Ichaer, or the Elder Blood, giving her powers and abilities which confound even the wisest of the Aen Elle or Aen Seidhe. She herself was an Aen Elle princess, and fell in love with a human sorcerer called Cregennan of Lod. Both races found this union abhorrent, so they persecuted Lara and her kin.

In the end, Lara was driven off by humans, and a man-in-arms chopped off her fingers when she was coming out of the royal carriage. Lara was pregnant at the time, and she died on a hilltop amidst a raging blizzard giving birth to a half-elven girl called Riannon. When the sun shone in the east the day after, the hilltop was carpeted with flowers and blossoms despite the torrent that laid waste to it the night before. That place was hence known as Dol Blathanna or the Valley of Flowers.

Triss Merigold is one of the main protagonists in The Witcher series by Andrzej Sapkowski and due to her legendary deeds, she has gone down in history as Merigold the Fearless. When she began her journey as a mage, Triss served Temeria, but ultimately found herself in the company of Geralt. Knowing about the Witcher’s relationship with her friend Yennefer, Triss used magic on Geralt to seduce him into her bed, and the two entered a brief relationship. It was here when Triss fell head over heels in love with the Witcher, a feeling that was not reciprocated.

Triss was also present during the Battle of Sodden Hill, which is why she earned the alias of the Fourteenth on the Hill, erroneously thought to have been killed by the Nilfgaardians. At Geralt’s behest, Triss makes her way to Kaer Morhen to help with Ciri, who is showing a peculiar aptitude for Chaos magic. Triss also helps Ciri learn about her womanly traits, and the two develop a close bond. Triss accompanies Geralt’s party throughout Blood of Elves and plays a major role in the Thanedd coup, even saving Geralt’s life.

After the destruction of Aretuza, Triss lays low and follows events from behind the curtains. Make no mistake, however, as Triss is one of the most powerful sorceresses to ever live. This becomes apparent when she finally unleashes her full strength during the Rivian Pogrom, raining fire on the mobs and devastating their ranks, which gives Yennefer the opportunity to make her way through to Geralt, who is fighting for his life on the other side. Triss also accompanies Geralt for the majority of The Witcher trilogy, not only helping him hunt down Letho of Gulet in Assassins of Kings but also finding Ciri in Wild Hunt.

Yennefer is a human mage of great power and the foster mother of Ciri. It is when she first meets Geralt of Rivia that the once-hunchback sorceress gets swept into an adventure unlike any other. During their first encounter, Geralt uses his last wish to bind his and Yennefer’s fates together, thus saving her from the djinn’s wrath. Geralt and Yennefer then begin a relationship, which falls apart due to the incompatible lifestyles they lead.

Ciri is the key that brings them together, however, and Yennefer spends a great deal of time with the Child Surprise, which then develops into a full-blown maternal love. Much like Geralt, Yennefer spends the majority of the story trying to find and protect Ciri. Yennefer is also a protagonist in The Witcher 3: Wild Hunt, and if the events of that game — which take place many years after the books — are anything to go by, she and the Witcher can get their happy ending together if the player makes the right choices.

Ciri may not have the extensive education offered to sorcerers at Aretuza to help her out of tough situations, but due to being Lara Dorren’s descendant, she’s arguably the most powerful mage in the world, perhaps even in history. Ciri has the ability to travel through time and space at will. She can even traverse alternate realities that comprise Andrzej Sapkowski’s multiverse, and we’re sure one of these worlds is actually our own.

The Cintran princess also underwent extensive Witcher training at Kaer Morhen, and furthered the study of the sword during her time with the Rats. Almost every noble, magic, or person of interest or power in the Continent tries to get their hands on Ciri at one point or another in the saga, and since we spend the majority of the later books in her POV, some fans even go so far as to suggest that it is Ciri, not Geralt, who is the main character of the story.