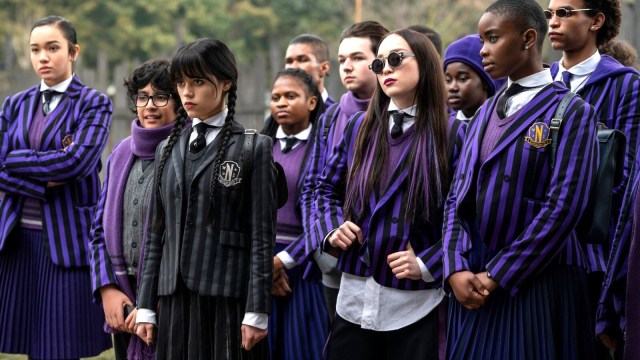 Another day, another smash-hit Netflix TV series that is nonetheless courting controversy. Wednesday has proven to be the perfect alternate Thanksgiving viewing this week, with folks loving the Addams Family reimagining and especially Jenna Ortega’s unbeatable turn as the iconic gothic teen. Unfortunately, not all aspects of the show are going down so well online. And, fairly or unfairly, director Tim Burton is bearing the brunt of their scorn.

On top of Wednesday’s love interest receiving little love from the fans, folks are also blasting Wednesday for delivering inclusivity in the absolute worst way. The series features a couple of major Black characters in its ensemble cast, which ordinarily would be a good thing, but the unfortunate truth is that both of them are portrayed as bullies and enemies of Wednesday.

The characters in question are Bianca Barclay (Joy Sunday), the queen bee mean girl of Nevermore Academy, and Lucas Wilson (Iman Marson), a normie bully and son of the town of Jericho’s crooked mayor.

Given that Burton has a checkered history when it comes to diversifying his projects, Twitter users are zeroing in on this egregious issue, with many laying the blame for this troubling depiction of Wednesday‘s Black characters at Burton’s doorstep.

In Burton’s defense, this is the director’s first-ever project with a person of color in the lead, so it seems that he is trying to do better in this arena. Likewise, he can’t really be held responsible for the scripting when the showrunners were Smallville alumni Alfred Gough and Miles Millar. Unfortunately for him, though, it seems Burton can’t escape from some inflammatory comments he made on this topic back in 2016, which were either incredibly tone-deaf or wholly offensive, depending on your point of view.

While the characters in his films and TV shows might be plagued by real ghosts, the lackluster representation in his work is what haunts Tim Burton in the real world.