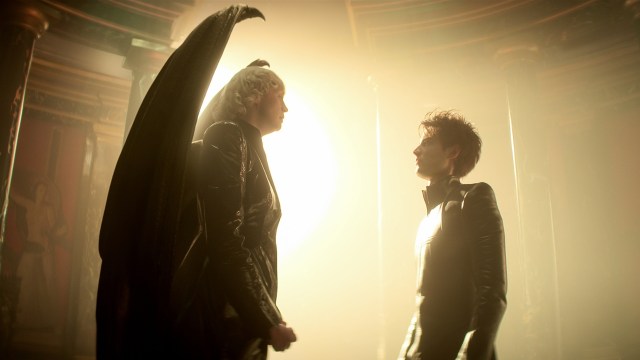 Stars of The Sandman are breaking down that epic fight scene that happened between Tom Sturridge’s Dream of The Endless and Gwendoline Christie’s Lucifer Morningstar.

The scene in question happened when Dream was trying to locate his helm in Hell after finally breaking free from century-long imprisonment by the cultist, Charles Dance’s Roderick Burgess.

The battle between Dream and Lucifer is no ordinary altercation, but somewhat resembles a competitive slam poetry session in which each person’s words have real-life consequences.

Even though there was indeed a conflict, Sturridge said he believes the characters maintained a “deep, underlying respect between them” throughout.

Christie disagreed, however, saying, “You see, I got nothing.”

Though Christie’s Lucifer is not one of The Endless siblings — which includes universal concepts like Dream, Death, and Desire — the character is still the ruler of her own realm, Hell, similar to how the Sandman is the ruler of the realm of The Dreaming.

There’s no doubt the battle scene between Dream and Lucifer is one of the most visually-arresting sequences in the entire first season of The Sandman, as we go from dueling snakes and hawks to whole worlds and universes going head-to-head.

Though Boyd Holbrook’s The Corinthian ended up occupying the first season’s culminating antagonist — amongst many — in season one of The Sandman, Christie’s Lucifer was teased at the very end of the season one finale as having a more prominent role in season two.

Check out The Sandman on Netflix.