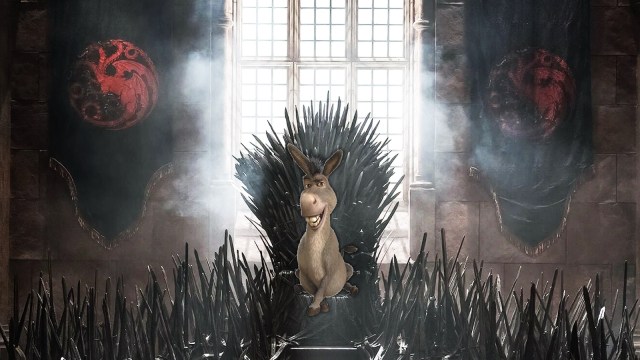 It was noticed early on that some of the characters in House of the Dragon may have some similarities to the ones we see in Shrek. While that started as a funny joke, the similarities began to be more obvious to the point where fans wondered if George R.R. Martin or any of the show’s writers took inspiration from the popular Dreamworks films.

Fans have compiled scenes from the HBO series and compared them to various Shrek films. While it is fair to assume that the showrunners likely didn’t copy the film as nobody can own the fantasy genre, you have to admit that this can’t just be a coincidence. Some of these scenes are exactly shot-for-shot from what we saw in the films.

Fans have jokingly criticized House of the Dragon for copying what has to be the best medieval film of the early-2000s. Why wouldn’t they? The first Shrek film won the very first ‘Best Animated Feature’ at the Oscars, and its sequel was deemed a masterpiece by fans. Not to mention, Fire and Blood, the book that House of the Dragon was based on, was published in 2011. Don’t be surprised if George R.R. Martin suddenly admits that he was watching Shrek while writing the book.

Despite their similarities, both Shrek and House of the Dragon have different stories. However, it is quite funny to think that the Game of Thrones prequel may have taken inspiration from the Dreamworks film during production. So far, none of the House of The Dragon staff have come out to confirm or deny these rumors of ‘plagiarism.’ So let’s appreciate that HBO may have accidentally created the best live-action adaptation of Dreamwork’s beloved fantasy film.