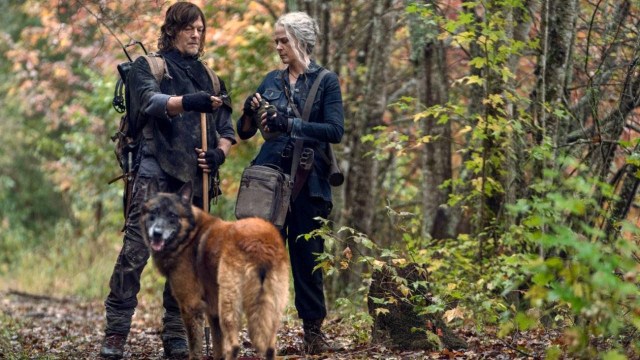 After 11 seasons stretched over 12 years, The Walking Dead fans have become hardened to the show’s signature trick of killing off its beloved ensemble cast of characters. That doesn’t mean they don’t still get their hearts broken whenever one of the survivors perishes, but they certainly know to expect it. So going into this past weekend’s grand series finale, folks were prepared for deaths aplenty.

Sure enough, the last ever episode of the historic post-apocalyptic series killed off a bunch of familiar faces, each one more devastating than the last. And yet fans could take this pain if it meant that the one character they would simply not allow to die made it out of the show alive. Yes, it’s the question every TWD viewer wants to know: Did Daryl’s faithful doggo Dog survive the events of the finale?

Does Dog die in The Walking Dead finale?

Let’s put you out of your misery and provide an answer to this burning question right now: good news, people! Dog survived The Walking Dead finale! Yes, Daryl’s pooch — who’s been by his side since he inherited him from ex-lover Leah — has been a fan-favorite part of the show since his arrival in season 10, so it’s a blessed relief that he wasn’t one of the casualties of the series’ grandstanding final battle.

Nevertheless, the bittersweet thing is that where he ends up means we’re not entirely sure if we’ll see more of him in the TWD universe.

Dog was absent for much of the finale, so we were left worried over where he was and what his fate was during the invasion of the walkers into the Commonwealth’s lower wards. Thankfully, our fears were put to rest during the episode’s most heartwarming, tear-jerking scene, which sees our heroes earn a rare and perfect moment of peace as they tuck into a group dinner. Dog is featured when Judith feeds him scraps from the table.

This brief scene is followed on right at the episode’s end. In classic fashion, The Walking Dead ends with one last flash-forward as we jump one year later and get a happy ending for the survivors. Ezekiel is the new governor of the Commonwealth, while Carol has decided to stick around as his deputy. Daryl, meanwhile, is heading off in search of Rick and Michonne. Before leaving, Judith promises that she’ll look after Dog for him.

As we all know, Daryl’s journey doesn’t end here as he’s going on to star in his own plainly titled spinoff, The Walking Dead: Daryl Dixon. For those hoping Daryl would be joined by Dog in his own show, however, clearly this is not the case as he leaves him in Judith’s care instead. That said, considering that the TWD franchise is far from over, and there’s the potential to revisit both the Commonwealth and Judith in the future, there’s every chance Dog may still find his way back to our screens at some point like the good boy that he is.