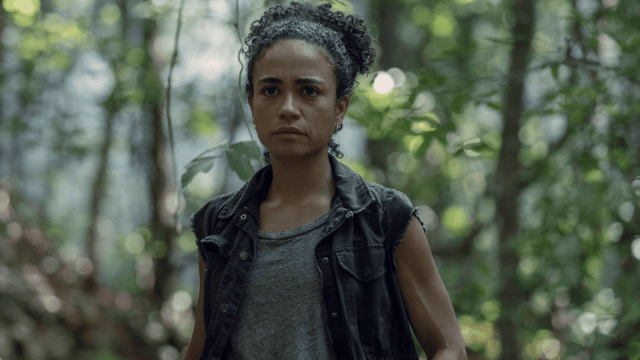 The Alexandrians turned Commonwealth exiles found themselves in quite a spot of bother in the latest episode of The Walking Dead, with a large number of our favorites ending up in a labor camp governed by a Warden who is evidently not to be crossed, while the scrappier of our band of heroes managed to make an escape and even pull off a rescue mission.

Daryl, Maggie, Carol, Rosita, and Gabriel succeeded in rescuing Connie from a different fate than everyone else at the labor camp, having overheard from guards that Pamela Milton had different plans for her – labeling her as ‘Designation 2’. From what we can gather about the conversation Daryl overheard about Connie’s label, designation 2 is possibly a fate worse than being a laborer under the Warden, judging by one of the guard’s reactions to the information.

Daryl interrogates a guard later in the episode as to what designation 2 means exactly, but alas, the captive wasn’t privy to that information – telling him he only knows that designation 2 prisoners get shipped off someplace far away never to be seen again. Where is that, exactly? We have a few thoughts.

The Civic Republic, home base to the Civic Republic Military (CRM) was likely Connie’s destination before she was rescued. While the crew of characters in The Walking Dead series hasn’t had to deal with this mob just yet, all signs seem to point to them butting heads before the series wraps.

The CRM is a force even more powerful than The Commonwealth, and Fear the Walking Dead and The Walking Dead: World Beyond has dealt with this mob in varying capacities. On the latter show, it was revealed that the helicopter in which Rick Grimes made his exit from The Walking Dead belongs to the CRM since Jadis traded Rick for entry into the settlement.

The CRM stays out of the way of groups like The Commonwealth and Jadis’ scavengers, as long as those settlements regularly provide the CRM with new people – either to join the ranks of its military or to be used as test subjects for its reanimation research.

Considering Hornsby’s pleas for his life to Pamela Milton earlier in the season, saying some relationships with third parties would become strained if he was stripped of his power and/or life, it’s a pretty safe bet that Connies ‘designation 2’ label meant that she was bound for the CRM.

What the label actually meant for her fate within the colony, is anyone’s guess. But knowing Milton, we don’t think the red carpet was about to be rolled out for the journalist that put her under the microscope.