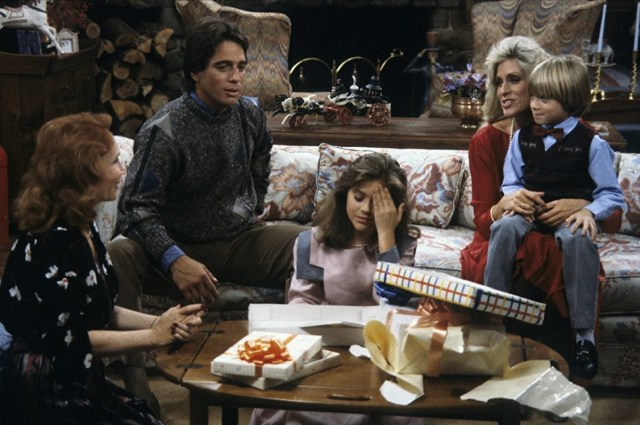 The popular 80s sitcom, Who’s the Boss?, ran for eight seasons on the ABC network. The show began in 1984 and ran its last episode in 1992, co-starring Tony Danza, Alyssa Milano, and Judith Light from start to finish. It’s undoubtedly become ingrained in contemporary American pop culture since its heyday and is easily the most popular television show attached to all three of these actors.

While it was on the air, the show went against the grain as far as typical gender roles were concerned, depicting Danza’s lead role as Anthony “Tony” Micelli being not the breadwinner, but as the primary caretaker of the household in which the characters lived. The “Boss” in this TV program was always Angela Bower, played by Judith Light. It was at Bower’s house that Tony and his daughter Samantha (played by Alyssa Milano), were welcomed into, the primary premise of the entire show.

The show was a great success and launched Danza, Light, and Milano into stardom, along with the rest of the actors and actresses involved. Since the show came to a close back then, what has become of the cast since then?

Popular actor Tony Danza was already known for his supporting role in the long-remembered seventies sitcom Taxi. Just a year after his time on that show, the opportunity to co-star in Who’s the Boss? came rolling up. He was cast as Tony Micelli, a Brooklyn-born former Major League Baseball player who takes a chance to move out of New York City to provide a better life for himself and his daughter. On the show, Tony wasn’t your average sports jock from Brooklyn. The character was very intelligent and nurturing, adding to the already against-the-grain depiction of a father figure staying at home to take care of the household, a rare thing even in the eighties.

After Who’s the Boss? ended in 1992, Danza’s star power brought him countless opportunities, mostly on the small screen. He did voice work on the Look Who’s Talking-inspired sitcom, Baby Talk before starring in shows like Hudson Street, The Tony Danza Show, and Family Law. In 2004, he began a respectable run on his own talk show, aptly named The Tony Danza Show, not to be confused with the aforementioned sitcom. And on the big screen, Danza made memorable supporting appearances in movies like Angels in the Outfield, Crash, and Don Jon. Most recently, he’s made recurring appearances in Power Book III: Raising Kanan, and is also currently shooting the feature film, Darby Harper Wants You to Know.

Veteran actress Judith Light played the role of a recently divorced advertising executive, Angela Bower on Who’s the Boss? Her character was for all intents and purposes, the head of the household, living with her young son Jonathan and her charismatic mother Mona before Tony and his daughter come into the fold. Light’s portrayal of Angela earned her a TV Land award for “Favorite Working Mom” in 2007. Before Who’s the Boss?, Light started acting on stage in 1970, then to Broadway productions in 1975, and finally an award-winning effort in the ABC soap opera One Life to Live, from 1977 to 1983.

After eight seasons on Who’s the Boss?, Light continued to work in various television movies and short-lived sitcoms much more than in films. In 2002, she had a recurring role as Judge Elizabeth Donnelly in NBC’s Law & Order: Special Victims Unit. Light then had a big supporting role in ABC’s comedy-drama series Ugly Betty. She won her first Tony Award in 2012 for her lead role in Other Desert Cities, and another the very next year for acting in The Assembled Parties. Light continued to succeed on tv in the meantime, with a supporting role in the 2013 reboot of Dallas, as well as co-starring in the Amazon Studios comedy-drama Transparent, from 2014 to 2019. In 2022, she recently had a guest role in the mega-popular FX horror series, American Horror Stories.

By the time she was cast in Who’s the Boss?, Alyssa Milano was already an experienced child actress, starring in theater productions such as Annie and Jane Eyre. She also appeared in several television commercials. In this show, Milano’s performance as the bright and adorable Samantha often garnered just as much praise as her adult co-stars, Danza and Light. Throughout all eight seasons, audiences got to see Samantha grow from that lovable little girl into a promising college student, all while making Milano an award-winning teen idol in the process.

After the show, Milano would continue to work steadily in tv and film roles and would also co-star on the hit Fox primetime soap Melrose Place, in 1996. Just two years later, she would co-star in the popular fantasy drama Charmed for eight seasons. While Milano would still keep up consistent work in various forms of media, She would also work diligently as a humanitarian and activist, writing books, fundraising, and volunteering her time towards various social and political causes. As far as her acting efforts are concerned, she just had a lead role in the 2022 Netflix thriller, Brazen.

Playing the role of Angela’s young son Jonathan, was Danny Pintauro, an experienced child performer like his co-star Alyssa Milano. Prior to being cast as Jonathan, Pintauro was first seen by tv audiences in 1982, as the original Paul Ryan on CBS’s classic soap opera, As the World Turns. He then had a supporting role in the classic horror film, Cujo, in 1983. Right after that came eight successful seasons as part of the Who’s the Boss? cast.

When Who’s the Boss? came to a close, Pintauro’s acting career slowed down considerably, compared to his castmates. In fact, after Boss?, he didn’t act again until making a small appearance in a 2006 indie drama film titled, The Still Life. A few years after that, Pintauro also made a small appearance in a 2010 episode of The Secret Life of the American Teenager. Since then, he’s usually made media appearances as himself in TV interviews, or the occasional Who’s the Boss?-type cast reunions. His last acting credit dates back to a 2016 web series called, Unsure/Positive, which through loosely-based narratives, helped to bring attention to people living with HIV/AIDS.

To play the role of Angela’s physically feisty mother Mona, Katherine Helmond was a natural choice, according to show producers, Martin Cohan and Blake Hunter. Before Who’s the Boss?, Helmond already established tv star power thanks to her Golden Globe-winning talents on the popular sitcom, Soap, from 1977-1981. She actually got her acting started back in the early sixties, then branched off into Broadway productions and small roles in both television and movies. While working on Who’s the Boss?, Helmond would win her second Golden Globe in 1989.

After the show was over, Helmond continued to work, mostly on television. She had a recurring role on the hit ABC sitcom, Coach, from 1995-1997 and also appeared in numerous episodes of Everybody Loves Raymond, from 1996 to 2004. Younger audiences might remember her voice when she played Lizzie, in all three Disney Pixar Cars movies, and related short films. Her final film role came in 2018’s Frank & Ava, a biographical drama based on a Willard Manus play of the same name.

Sadly, Katherine Helmond passed away on Feb. 23, 2019, from complications of Alzheimer’s disease. She was 89 years old.