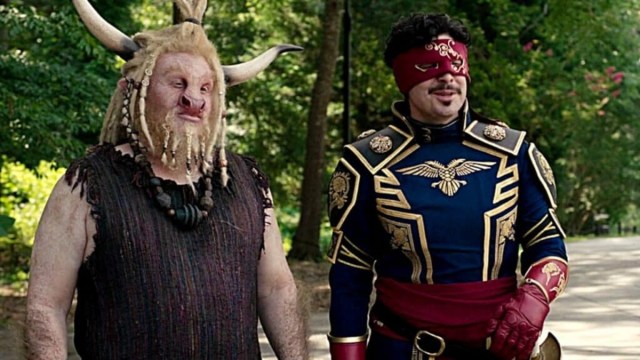 While She-Hulk: Attorney at Law‘s seventh episode still didn’t give us the team-up with Daredevil we’re all waiting for, the latest installment of the ongoing Disney Plus series did see Tatiana Maslany’s Jennifer Walters make friends with some other superpowered people from Marvel lore, just not the ones we were expecting.

After checking in on client Emil Blonsky at his wellness retreat, Jen sticks around and works through her issues after being ghosted by her latest beau. She ends up bonding with the other attendees of the former Abomination’s self-care farm, namely a bunch of superheroes and supervillains from the bottom of the barrel of the comic book universe. Let’s run through all the new characters introduced in She-Hulk episode seven.

First up, we have Alejandro Montoya (Joseph Castillo-Midyett) aka El Aguila—that’s Spanish for Eagle—who is basically Marvel’s very own Zorro knockoff. The self-styled swashbuckler is actually a mutant in the source material with the power to emit bioelectric blasts that he often channels through his sword, which we briefly see him do on the show. He has a history with both Luke Cage and Iron Fist in the comics, having both fought against and alongside the Heroes for Hire.

William “Bill” Taurens (Nathan Hurd) was once a thuggish criminal hired by evil scientist Mister Kline to round up test subjects for his experiments, which involved a mutagenic serum derived from bulls. When his attempts were scuppered by none other than Daredevil, Kline injected Taurens with his serum instead, transforming him into the Man-Bull. In the comics, Man-Bull is even more animalistic in appearance and resembles a minotaur. His other foes include Hulk, Spider-Man, and the X-Men. Yeah, he gets around.

Much like he is in She-Hulk, the comic book Porcupine (Jordan Aaron Ford) is recognizable for his suit covered in sharp quills from which he draws his name. That said, he’s more formidable. In the source material, his quills can be launched at his opponents, and his suit can also fire laser beams, concussive bombs, tear gas, and much else. Three supercriminals have born the Porcupine mantle, in fact, with the second—Roger Gocking—being a sometime member of the Thunderbolts.

While the other three characters are faithfully recreated for the MCU, She-Hulk offered a wildly different take on Saracen (Terrence Clowe). Here, the villain is a bit of a weirdo who believes he’s a vampire. In the comics, Saracen is one of the oldest bloodsuckers on Earth and lived beneath the Vatican. He’s also not to be confused with the Punisher enemy of the same name. Given that he’s one of Blade’s rogues, we might consider this yet another tease at the Daywalker’s incoming debut.

She-Hulk: Attorney at Law will no doubt continue to offer up more oddball Marvel characters as it continues Thursdays on Disney Plus.