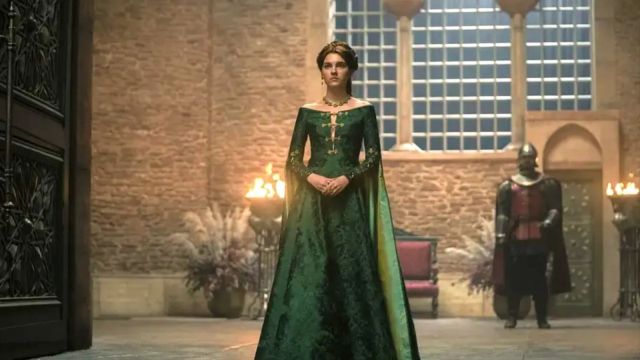 The season one finale of House of the Dragon showcased the preparations for the upcoming civil war called ‘Dance of the Dragons’. But unlike previous episodes where they referred to houses and family members by name, the characters in the show started to refer to certain groups of people by color.

There are two houses to be aware of in House of The Dragon — the Blacks and The Greens. And including the finale, the last two episode titles were based on those two colors as the episodes showcased their plans post-King Viserys. While the books gave plenty of detail as to why the two major parties were named after those colors, the show lightly touched on the subject.

Who are the Greens in House of the Dragon?

The Greens in House of the Dragon mostly refer to House Hightower and their allies. They believe that Aegon II Targaryen, King Visery’s first-born male child, should sit on the Iron Throne. They also planned Aegon’s ascension in secret as they do not believe that Rhaenyra and her children should be next in line for the Iron Throne, especially due to the rumors that her children’s father is Ser Harwin Strong.

The reason why the Hightowers are referred to as the Greens in House of the Dragon is that it is said that the beacon on the Hightower glows green whenever Oldtown calls its banners to war. A prime example of this was seen in episode five when Alicent interrupts King Visery’s speech by appearing in a green dress and everyone in the room stopped and watched. At the same time, she expressed her resentment towards Rhaenyra for lying to her, causing a greater rift between families.

Some notable allies for the Greens asides from the Hightowers are Ser Criston Cole, Larys Strong, and most recently, Lord Borro Baratheon.

All episodes of House of the Dragon are now available to stream on HBO Max.