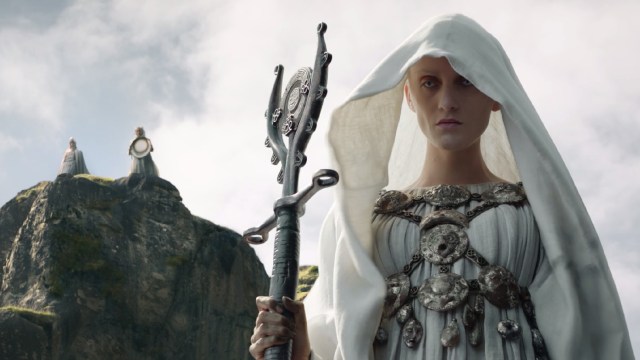 We hadn’t expected the final The Rings of Power episode to answer every question we have about this new narrative. Even knowing who the Stranger is, and what Sauron has been up to, is enough to quench the thirst of every Tolkienist, but that doesn’t mean we’re particularly looking forward to waiting another two years to learn the truth about some of the other questions that are boggling our nerd brains, the least of which is the identity of the three mysterious white-robed figures who have been giving our brave Harfoot ensemble grief.

The characters first appeared on the site where the Stranger crashed onto Middle-earth. It was obvious that they were tracking him, but to what purpose remained an enigma. They then attacked the Harfoots with little to no provocation and set their caravans on fire, confirming that their lot is with the Shadow and not the so-called “good guys.”

In the final episode, the cultists surround the Stranger and proclaim that they’re there to serve him because he’s Lord Sauron. According to the finale’s credits, the three mysterious figures are known as the Dweller, the Ascetic, and the Nomad, played by Bridie Sisson, Kali Kopae, and Edith Poor, respectively.

Not much is known about their origins besides what the show has revealed. Even consulting Tolkien’s book, you won’t find a mention of them anywhere. What we do know is that their leader, the Dweller, was a sorcerer and they worshipped Sauron as the successor to Morgoth, just like Waldreg did.

But now that we’ve got the official explanation out of the way, let’s get into the juicy speculative side of things.

When the Stranger regained his composure and used the Dweller’s staff to cast the cultists away, he said: “From Shadow, you came. To Shadow, I bid you return.” While it’s unclear what “shadow” means in this context, the visual cues from their transformation seem to indicate that the Stranger somehow sent the cultists scurrying into the Wraith world.

What’s more, the Dweller seems to be wearing a crown atop their head that immediately makes us think of the Witch-king of Angmar. He, too, had a crown in the same fashion, especially when Frodo glimpsed him in the shadow world. Not much is known about the villain’s origins, except for the fact that he was a powerful lord of Men and a great sorcerer, and the Dweller appears to be both of those things.

In that case, was it the Witch-king of Angmar we just saw in The Rings of Power? Or is it just a coincidence?

I guess we’ll be pondering that question for quite a while yet, so let’s pray the Amazon Studios team makes a dent in the production workload for season two soon.

All episodes of The Rings of Power are currently streaming on Amazon Prime Video.