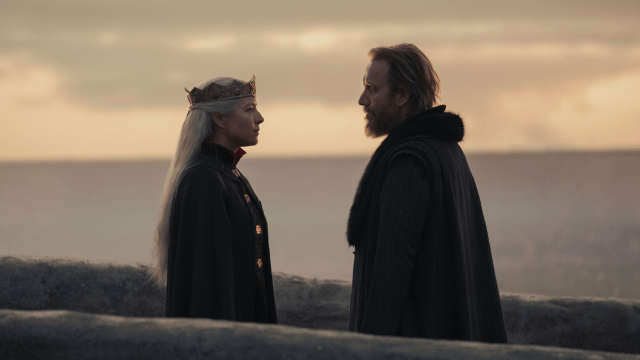 Warning: This article contains spoilers for the House of the Dragons season one finale

The first season of House of the Dragon has come to its thrilling conclusion, with the Dance of the Dragons well and truly kicking off.

For a series known for not guaranteeing the safety of any of its characters, The Black Queen didn’t overly rely on gratuitous violence and writing off key characters to tell its story. Unless you count Rhaenyra’s graphic and tragic stillbirth, there was only one other character that got chomped in the season finale.

Final warning, avert your eyes to another tab of your web browser if you’re yet to see the episode because we’re going in.

A brilliant dogfight between Lucerys and Aemond astride their respective dragons Arrax and Vhagar caps off the season finale. Lucerys was dispatched to Storm’s End to bid for the allegiance of House Baratheon, and was seemingly unsuccessful in his bid, as Aemond had beaten him to the punch with some betrothal pledges.

Aemond wasn’t about to let Lucerys leave so easily, demanding he maim his own eye as penance for the events some years back which led to Aemond losing one of his own eyes. Lucerys refuses and departs Storm’s End unscathed in his duty as the messenger.

Of course, once Lucerys leaves the proverbial safe zone, all bets are off, with Aemond chasing down Lucerys in the middle of a storm, demanding that Lucerys pay off his eyeball debt. It’s at this point that Arrax goes rogue and blows a plume of fire in Vhagar’s face, to his master’s dismay.

It buys Lucerys and Arrax enough time to get clear of the storm, emerging in the sunlight in what seemingly signals a successful escape. If only it were so.

Vhagar wasn’t about to take that flamethrower to the face lying down. He emerges from a storm cloud, and in one gnarly chomp, disintegrates Arrax and Lucerys into pieces, also in complete disobedience to his master. Ouch.

News of this appears to quickly get back to Queen Rhaenyra, and the perceived malicious murder of her son has got her rightfully fuming, and ready for all-out war. See you in season two.