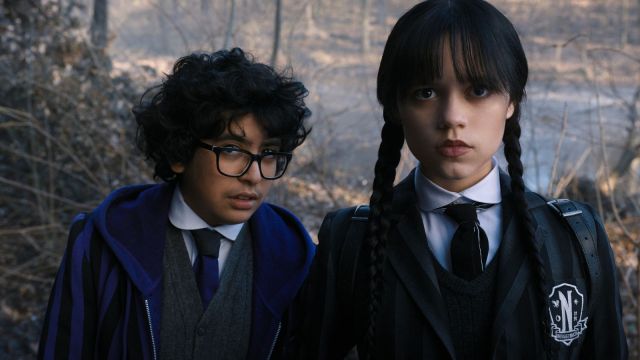 Ortega has made a name for herself in horror spheres this year, following appearances in both Scream and the Ti West film X. In her final big role of 2022, the 20-year-old played Wednesday Addams in the much anticipated Netflix series. With it playing out somewhere between a murder mystery, high school drama, and coming-of-age story, it will shock no one there’s a romantic element in the eight-part series.

Who does Wednesday end up with?

Throughout the series, the youngest of the Addams family is seen in several friendships with her cohort at her Nevermore school. The love triangle sees Ortega’s Wednesday stuck between Hunter Doohan’s Tyler and Percy Hynes White’s Xavier. Tyler is much more of a regular, run-of-the-mill student on paper, while Xavier is an edgy artist whose mom definitely doesn’t understand his art.

Xavier is incredibly flirty with Wednesday, constantly trying to impress her outwardly. Unfortunately, women tend not to be attracted to young men accused of murder. Apart from certain people who saw the Dahmer series and thought they could fix him. Back on topic.

Tyler is much more of a nice guy type, with him expressing his feelings to her and them having a kiss, but it leading to far more dramatic circumstances than Wednesday would’ve ever intended. By the series finale, she ends up with neither of the men as Tyler ends up being both her first kiss and her first murder mystery perpetrator. Love hurts.