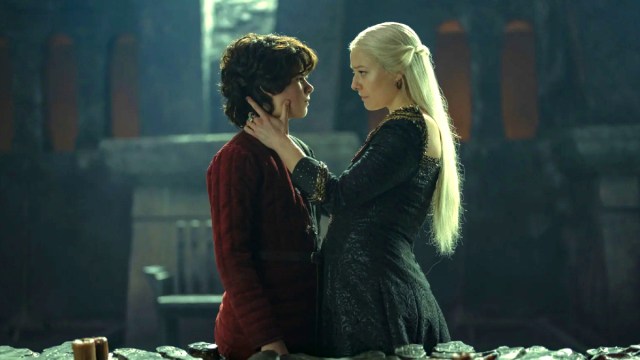 Warning: There are major spoilers for episode ten of House of the Dragon.

With the key themes of palatial intrigue, serious plotting, and harmful machinations, House of the Dragon has successfully maintained the standard set by its predecessor Game of Thrones. The key difference is that this time, the focus is on the action taking place in King’s Landing as the conflicts around the line of succession continue to grow stronger.

The season finale showed the rivalry between the Black and the Green factions taking the shape of a full-fledged preparation for war. The episode is replete with plots and strategies by the Black faction to acquire the power and strength required for waging a war against the Green faction led by Alicent (Olivia Cooke) and Otto Hightower (Rhys Ifans). This is done to challenge usurpation and treachery committed by Greens by crowning Alicent and Viserys’ firstborn son Aegon II as the King of Westeros and the Seven Kingdoms.

Towards the end of the episode, we get to meet the possible allies of both factions. While Borros Baratheon (Roger Evans) occupied significant screentime, his role was limited to openly rejecting Rhaenyra’s request for assistance as well as putting a halt to possible bloodshed between her messenger/son Lucerys and Aemond Targaryen.

Throughout the planning and attempts at devising effective strategies for reclaiming power, not foreign to the world of Game of Thrones, one name that has occasionally cropped up is that of a prominent member of the Stark family, Cregan Stark. Let’s shine some light on who he is and his possible contribution to the storyline.

What role would Cregan Stark play later in the series?

As the season one finale came to an end, the viewers were introduced to the plans by the Black faction about their next move against their formidable opponents. Unlike the members of her faction, Rhaenyra seemed to be disillusioned with the idea of immediately taking a harsh stand against the Greens before being aware of her allies and how loyal they would be to her succession as the monarch.

In the episode, she wanted to know about some of Westeros’ great houses who would support and assist her in her battle to take back the Iron Throne. Amongst the familiar houses whose names were announced including those of Lannister, Stark, and Baratheon, Cregan Stark was regarded by Rhaenyra as one of her trustworthy allies. His name came up more than once in the series even though he hasn’t been shown to the audience yet.

However, the show provides us with information about his age, which is that it is the same as Rhaenyra’s eldest son and heir Jacaerys Velaryon. Before the latter left for Winterfell to serve as his mother’s messenger to the Starks, Rhaenyra mentioned that one of the reasons for sending Jacaerys was their similar ages.

As the series is renewed for season two, there’s hope for receiving all the answers related to Cregan Stark and the role he will play as an ally of the Black faction. Meanwhile, the mention of the Starks was quite a memorable moment for the fans as the house played an influential role in Game of Thrones and was particularly celebrated for their honor, righteousness, and integrity which cost most of the members their lives.

It seems like the Starks in the world of the Targaryens were more or less the same as their counterparts almost 200 years later considering the massive army and support that Cregan Stark would provide to the Black faction during the Dance of the Dragons.

The honesty of the Starks was confirmed by Rhaenyra with confidence in the episode when she said that not one Stark in the realm was known for breaking their oath and Cregan Stark would continue to maintain the same oath of allegiance that his father had pledged to Viserys when he was crowned as the king. While the show named Cregan Stark as a potential ally, Martin’s Fire & Blood describes the character’s role in greater detail.

How is Cregan Stark treated in the book?

In the book, both Cregan and Jacaerys became close companions after the latter went to Stark with the queen’s proposal. Like his predecessors, Cregan had maintained his oath of allegiance to the crown in favor of Rhaenyra’s reign and later developed an unbreakable bond with Jacaerys. The latter reminded him of his younger brother who had died and as a result, they decided to transform their friendship into a brotherhood. This was ensured by the Pact of Ice and Fire where the duo took an oath, according to which Jacaerys’ future daughter would be wedded to Cregan’s son.

Stark also plays an influential role in the Dance of the Dragons after they sent a host of Northmen (who they called Winter Wolves) down south to die honorable deaths fighting for Rhaenyra’s claim to the throne. After Rhaenyra fled the capital due to the growing conflicts and riots, Stark promised to send a group of 10,000 men to her aid in reclaiming King’s Landing.

However, the plan failed as Rhaenyra’s own men in Dragonstone betrayed her, leading to her defeat and demise at the hands of her half-brother, King Aegon II, who fed her to his dragon. The event didn’t shake the Starks’ resilience in assisting the Blacks in taking back control of King’s Landing. However, before the Black army could arrive at its destination, Aegon II was poisoned and succeeded by Rhaenyra’s son Aegon III.

Cregan Stark held prominent ranks in his reign as he was made the Hand of the King and the new Lord of the Seven Kingdoms. If the show continues to honestly adapt the details from the books, then the Starks of House of the Dragon are the winners owing to their honor and utmost honesty which caused their gruesome defeats almost two centuries later.

How is Cregan Stark related to Ned Stark?

Given the events of House of the Dragon serving as the foundation for the much familiar episodes around 170 years later, it is quite certain that Cregan Stark could be the predecessor of the honorable Ned Stark (Sean Bean). He is the eldest son of Rickon Stark who was seen at the start of the series bending his knees to Viserys’ announcement to appoint Rhaenyra as the future heir.

Obviously, many generations passed between Cregan and Eddard Stark, though both served as Lord of Winterfell. The position of power passed from Cregan to Brandon; from Brandon to Berron; from Berron to Willaim to Edwyle to Rickon, and then to Ned Stark, making Cregan the great-great-great-great grandfather of Ned Stark. Divided by time but bonded by traditions and norms, both the Stark members epitomize virtue, honesty, and honor in the truest sense of the term.