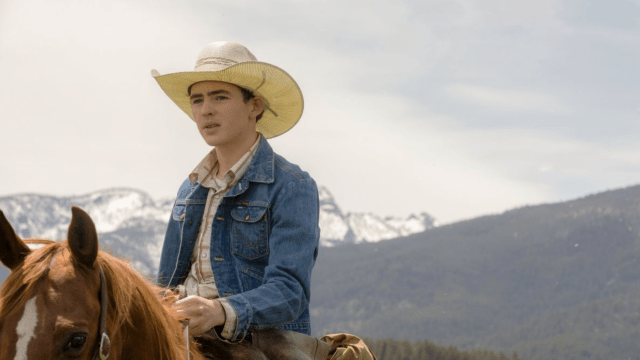 Image via Paramount Plus
Review of:

Paramount’s hit series Yellowstone just returned for its fifth season and there’s a lot of changes in store for the Dutton family. However, one change has been weighing heavy on fans’ minds, and it’s not the fate of Yellowstone ranch. Carter, the young orphan Beth took in last season, is looking noticeably different. The change is so obvious that Yellowstone fans are curious if Carter changed actors.

Since the first episode of season five came out, viewers immediately noticed that the young teen had really grown up since the last season. Fans of Yellowstone may remember Carter as a baby-faced young teen whose troubled family life reminded Beth of her husband Rip Wheeler in his younger days. It’s easier to see how Beth thought Carter resembled her husband as the now-lanky teenager looks much more like the actor playing the younger Wheeler in flashbacks.

While fans might not be able to recognize Carter, rest assured he is still being played by 16-year-old actor Finn Little. The actor recently had a growth spurt in real life and is now reportedly clearing six feet according to costar Cole Hauser, who plays Wheeler. In an interview with Entertainment Tonight, Hauser expressed his shock at seeing how grown up the young actor has become in the last year, saying, “that boy’s looking me in the eye!” We’re not sure how accurate this height estimate is, as Little’s IMDB page lists his height at a cool 5’10” but given how fast the actor keeps growing, this might be out of date.

Who is Finn Little?

Finn Little, who does indeed still play Carter in Yellowstone, is an Australian actor. Born in Brisbane in 2006, Little is still quite young, and while he’s only beginning his acting career, he has some impressive film credits so far. The teen played alongside Angelina Jolie in last year’s Those Who Wish Me Dead. Taylor Sheridan, the creator of Yellowstone — who also appears as horse trader Travis Wheatly on occasion — also wrote and directed the film and Little’s performance made enough of an impression for Sheridan to cast him as Carter.

Little will have his hands full with Carter this season as his character will reportedly have a love interest. In an EW exclusive, the publication revealed that Orli Gottesman will join the cast this season as Carter’s love interest, Halie. Halie is described as a “fun, confident, outgoing girl…who gives Carter the chance to come out of his shell.” In addition to this romantic plotline, Hauser reveals that we’ll see plenty of scenes with him and Little in the coming episodes, telling EW, “I’m becoming more of, I guess, a father figure to him, although he’s growing up fast.”

We’re looking forward to seeing Carter grow this season, both metaphorically and literally.