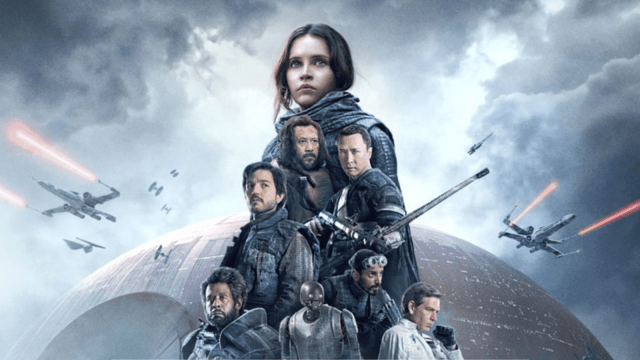 One of the more burning questions fans have from the Star Wars spinoff, Andor, is whether Felicity Jones’ Jyn Erso will make an appearance. The show is set during the period between the prequels and the original Star Wars trilogy, which is exceptionally fleshed out. That explains why we’re getting so much material from that period.

With Andor, we get more information about this particular era in Star Wars history. It’s especially interesting because all of the original characters in Rogue One, which is the source material for the show, die at the end of the movie. Yes, that’s a mild spoiler, but the movie came out years ago, so relax.

One of the things that made Rogue One so surprising and such a great movie was that very fact of death. It also didn’t hurt that it featured incredibly fleshed out characters the types of which we had never seen in a Star Wars movie before (blind guy with a stick? Let’s go!).

Rogue One set the stage for the series of Star Wars offerings we’ve been getting like The Mandalorian, The Book of Boba Fett, and Obi Wan Kenobi. It also had a female lead for the first time in a Star Wars movie. That would be Jyn, and she was one of the most developed, passionate characters in SW lore.

A few different characters appear in the show from the movie. Before we get into that let’s do a quick review of the plot of the show.

What is ‘Andor’ about?

Andor follows the adventures of Cassian Andor (Diego Luna) and the events that transpire to get him to eventually join up with the resistance and take on the empire. Here’s the official synopsis: “Andor will explore a new perspective from the Star Wars galaxy, focusing on Cassian Andor’s journey to discover the difference he can make. The series brings forward the tale of the burgeoning rebellion against the Empire and how people and planets became involved. It’s an era filled with danger, deception and intrigue where Cassian will embark on the path that is destined to turn him into a rebel hero.”

What ‘Rogue One’ characters return for ‘Andor?’

Obviously Cassian comes back, that’s a given, but other characters are back as well. One of the things about Cassian in Rogue One was that he had a mercenary mindset and wasn’t afraid to get his hands dirty. We’re probably going to get to see more of that.

Also returning is Mon Mothma, who first appeared in Return of the Jedi. She’s an Imperial Senator and is the lone opposer to the Empire. Saw Gerrera, played famously by Forest Whitaker, is back as well, though we don’t yet know the extent of his appearances on the show.

We also will see the return of Droid K-2SO. In Rogue One, he was a modified imperial security droid that was reprogrammed to serve the rebellion. Voiced by Alan Tudyk, he mostly played the role of comic relief, but he was also very handy in a fight. However, we probably won’t see him until season two. That brings us to the big question.

Will Felicity Jones’s Jyn Erso make an appearance in ‘Andor?’

We have to think a little about circumstances when we think about how Jyn would make an appear in the show. Right now, we don’t know whether she’s going to be in the cast or not, but Disney would be foolish to not give her a chance to reprise the fan-favorite character. However, the first time Jyn meets Cassian is during the events of Rogue One, so her fighting alongside Cassian would probably be unlikely.

Since Rogue One established her connection to Saw, if she does appear in a cameo, it could potentially be linked to him. Star Wars canon says that Jyn was abandoned by Saw when she was 16. If we go by the book, Catalyst, the Rogue One events happen when she is 20 or 21, which would make her the appropriate age during the events in Andor. This lends the potential for another actress to play Jyn or for Jones to return with a younger person’s makeup or something CGI-ish. This isn’t likely, so the answer is that she could potentially appear, but it’s by no means a sure thing.