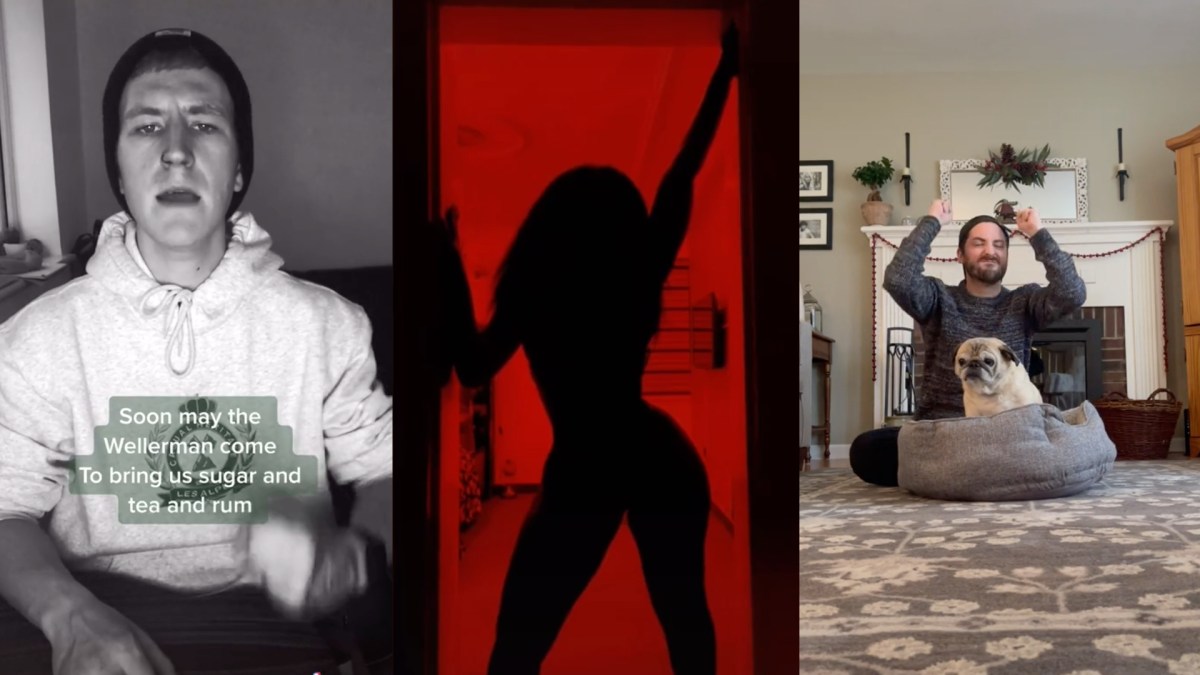 TikTok is one of the real MVPs of the pandemic, continuing to dominate trends and conversations globally through the second year of COVID. It can be funny and weird, cringey and discomfiting, and even educational. According to CNET, it’s got something for pretty much anyone, which is probably why the app managed to reach 656 million downloads in 2021 alone.

More than three years after it became a worldwide phenomenon, TikTok is still on top of its game. Sounds used on TikTok quickly become the nation’s top tracks, trends reach far beyond the video-sharing app into the real world, and young creators on TikTok are birthing communities, and sometimes even careers, through their uploads.

The trends born on TikTok often last weeks, if not months. Some of 2021s most popular trends stuck around for even longer, clogging up ‘for you’ pages with dozens of new entries every hour. While a number of these trends were thoroughly forgettable, some of them remain iconic even months after they faded from the zeitgeist. Some, on the other hand, remain in our brains for only the worst reasons, leaving a stain on our memories that we just can’t seem to shake.

A few of TikTok’s most popular 2021 trends were also its best. Creators on the app devised some genuinely interesting, creative, and artistic trends. Whether they were popular for promoting body positivity, hitting just the right note of nostalgia, or for perfectly aligning with a massive cultural moment, these were the best TikTok trends of 2021.

I know, I know. 2021 went by in both an instant and a decade, leaving many people feeling like the year—and 2020, for that matter—existed outside of time. For this reason, the Sea Shanty trend on TikTok really feels like it finished long before we rang in 2021, but that’s just the effects of the pandemic. In fact, the Sea Shanty trend was one of 2021’s earliest TikTok trends, ringing in January with a wealth of creators humming along to “Wellerman” by the Longest Johns.

User @nathanevanss officially started the trend at the very end of 2020. By the time it had taken off, however, we were a few weeks into 2021. The original video prompted a slew of copycats, stitches, and new takes on the trend and inspired a wealth of new fans to discover the glory of sea shanties. It also led to Evans’s big break, elevating his career as a singer and collecting him hordes of new fans.

Another trend that technically started in late 2020 is the Renaissance Painting trend. However, it really picked up speed in the early weeks of 2021, qualifying it for a spot on this list. The trend is artistic and simple in nature, allowing creators to insert themselves into stunning works of art.

The trend is honestly pretty simple, but the results are absolutely breathtaking. Entries into the Renaissance Painting trend see people reimagine a number of famous Renaissance-style paintings with various alterations before inserting themselves into them as the image’s focal point. It allows users to show off their editing skills while also leaning heavily on their artistic eye.

Shifting gears from ShantyTok to SexyTok, the Silhouette Challenge dominated much of TikTok’s February content in 2021. Initially, the trend mainly saw thin or particularly fit people transition from baggy, ill-fitting clothes to a backlit silhouette showing every muscle and curve, but eventually, the trend expanded. Soon, it became a body positivity trend, allowing creators of all sizes to take a short moment to celebrate themselves.

Whether as a thirst trap or a boost to one’s self-image, the trend was absolutely everywhere on TikTok for most of February. The trend was so popular, in fact, that entries are still rolling in nearly a year after it first went viral.

One of TikTok’s most creative trends of 2021, the creation of various takes on Adult Swim’s recognizable bumps dominated for you pages throughout the month of June. Calling back to those oft-forgotten lazy afternoons of our youth, the trend captured both nostalgia and imagination. Hopefully, it inspired the network to hire some TikTok talent for future projects.

The trend took on too many different forms to properly capture here, but it birthed some genuinely impressive creations. Plus, the Adult Swim trend encouraged creativity, pushing users to greater heights of innovation and originality with each fresh upload. Even the TikTok account for Adult Swim itself got in on it, uploading their own addition to the trend.

Perhaps the best TikTok trend of the year aligns with a very real-world phenomenon. Dubbed the “great resignation” by news stations around the nation, 2021 saw a very overdue trend start to take over as people quit their jobs in droves. Listing numerous factors, including low wages, difficult customers, challenging hours, and unpleasant working conditions, among many others, huge numbers of minimum-wage employees left the security of their jobs in hopes of seeing the U.S. job market make permanent changes.

While those changes are still on the way, the great resignation continues to sweep the nation. Employees continue to leave jobs that they hate, more willing to face an uncertain future than yet another day of drudgery. Numerous quittings were immortalized thanks to TikTok, where a number of creators have documented their final moments on the job.

Bones or no bones?

Arguably 2021’s very best trend, the Bones or no Bones trend, is one of TikTok’s most wholesome offerings. While the trend’s creator, Jonathan Graziano, first started uploading videos of his elderly pug Noodle in mid-2020, his way of ascertaining what kind of day lies ahead didn’t become a TikTok phenomenon until pretty late into 2021. The phrase “bones or no bones” really started to take off in October 2021.

Since then, the phrase has become a rallying cry on TikTok and beyond. Graziano now makes it a habit to use Noodle as an official declaration of whether it is a bones day or a no bones day, the latter of which gives broad permission to the world to simply not. If it’s a no bones day, skip the extra workout or maybe consider doing your job from home. Noodle has spoken, after all.

Not all TikTok trends are equal. While some of the app’s worst trends are also some of its most popular, they exist in our brains as frustratingly permanent reminders of our least favorite TikTok moments. Whether due to their lack of safety, criminal element, or grating choice of audio, these are our picks for TikTok’s worst 2021 trends.

Anyone who spent more than 20 minutes on TikTok during 2021’s mid-summer months saw at least one or two creators dig into the ongoing war between Millennials and Gen Z users on the app. The war has been ongoing on numerous social media sites but blew up on TikTok, where the vast majority of users fall into the Gen Z age range.

While it wasn’t a trend in the way many of TikTok’s challenges and dances are, the Millennial vs. Gen Z debate was too prominent on TikTok to ignore. It wasn’t a bad thing at its core — in many ways, it highlighted the differences between generations charmingly and humorously — but the negativity it stemmed puts it on this article’s worst list. Instead of going after each other for how we part our hair or what music we listen to, maybe we could all make an effort toward simply getting along.

Honestly, there are some reasonably good uploads to this trend, but the audio for the Buffering TikTok trend is just too obnoxious not to be included on this list. The trend, which went viral during the summer months of 2021, sees people present a shocking or unexpected situation, paired with the app’s buffering creative effect and an audio clip from Bo Burnham’s Inside special.

While the trend itself offers up some pretty humorous entries, the audio stuck around for WAY too long. It soundtracked songs both within and outside of the buffering trend, creating endless headaches for users.

Ah yes, we’ve reached cult-tok. While it is very much not a cult in the traditional sense, mid-2021 saw literally hundreds of TikTok users jump on a trend that’s come to be known as the Ghostface cult. Of course, most TikTok trends require at least a bit of actual work to participate, but this entry merely requires that users change their profile picture to an image from Scary Movie of Ghostface from Scream exhaling a cloud of smoke.

The trend is easy and straightforward and so predictably became one of the standout trends of 2021’s spookiest month. Unfortunately, it saw far too many accounts shift their profile images to match up with the remainder of the cult and resulted in… pretty much nothing. It was supposed to lead to a surge in participating users’ follower counts but often simply resulted in a new profile picture. The trend’s lack of any artistic, creative, or even humorous elements made it little more than an odd occurrence, however, and pushed many to wonder why it even happened in the first place.

Even non-TikTok users became familiar with the Milk Crate challenge in August of 2021. Unfortunately, like many social media challenges, the trend posed a difficult and potentially dangerous physical challenge for participants to attempt and led to a number of serious injuries. It was so dangerous, in fact, that a search for “milk crate challenge” on the app will simply result in a page warning users about the dangers of internet challenges.

Video entries into the Milk Crate Challenge document as participants stack up milk crates like a staircase before attempting to climb them. The unsteady foundation led to numerous falls and some pretty serious injuries. Not everyone who gives it a go ends up falling, of course, but still — let’s make 2022 the year we leave dangerous viral challenges in the past.

A certain line-up of inadvisable challenges reappears every few years to tempt a new generation. In 2021, that challenge was the Dry Scooping challenge. The trend appeared mid-way through the year, but warnings about its potential health risks continued to crop up well into 2021’s winter months. Like the Milk Crate challenge, a search for the Dry Scooping challenge on TikTok will merely lead to a warning page. Videos related to the challenge are absent from even Twitter, resulting in this entry having no accompanying clips.

The trend challenges people to ingest a scoop of pre-workout or protein powder with no liquid to help wash it down. It supposedly leads to a more productive workout session, but in reality, it can lead to numerous health issues. One influencer who attempted the trend before a shift at work was even hospitalized after the challenge prompted a heart attack. She is only 20 years old, proving that the Dry Scooping challenge can present real, life-threatening dangers to anyone, regardless of age.

Our final entry on this list reaches past potential bodily harm or simple annoyance into outright crime. The Devious Licks TikTok trend challenged young users, primarily students, to attempt mischievous acts at their schools. It essentially invites young people to engage in destructive or damaging acts at their local learning institution while recording their crimes for the world to see. Like some that came before on this list, it has been removed from TikTok and replaced by a warning page.

Not all of the entries into the Devious Licks — or simply Devious Lick — challenge involve crimes, but a large number of them do. Some simply saw participants make a mess, smearing soap on walls and toilet papering rooms. Others saw students steal property from their schools or cause real, pricey damage to things like bathrooms and classrooms.