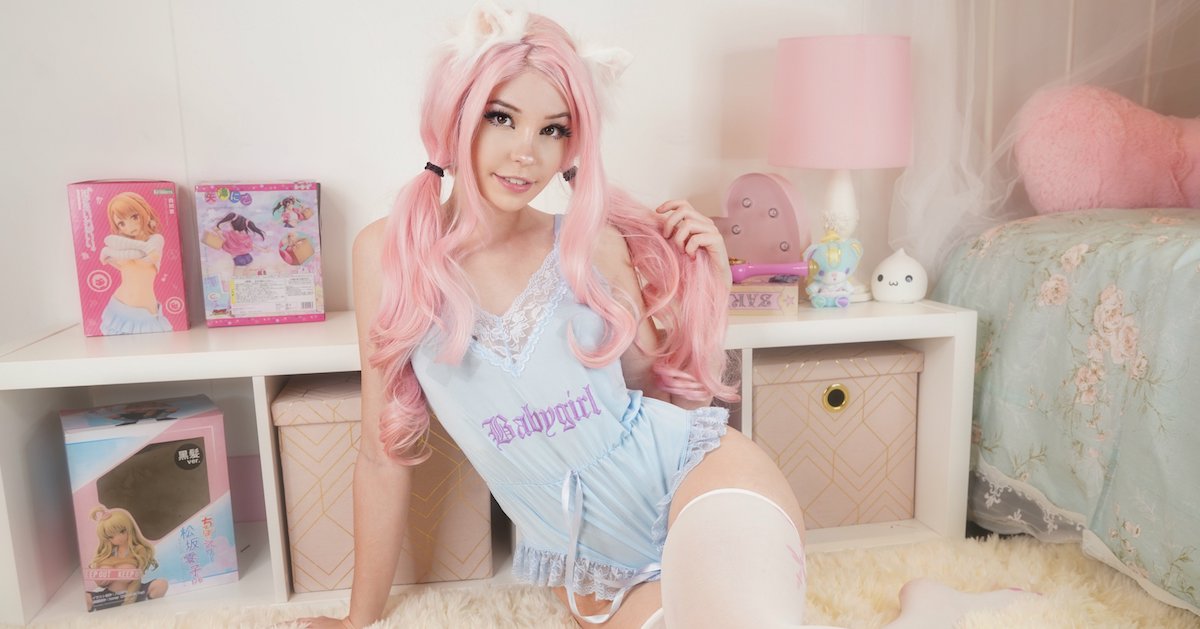 Whatever happened to Belle Delphine? She maintained internet sensation status for years after bursting onto the scene with help from her YouTube channel and other social media accounts. In recent months, however, she’s all but vanished, and many of her fans don’t know where she disappeared to. Here’s what to know about the life and career of Delphine, as well as what she’s up to today.

Who exactly is Belle Delphine?

Somewhere in the middle of 2019, Delphine created a satirical Pornhub account to troll her fans. She started selling what she called “gamer girl bathwater” through the online store. The bathwater was bottled up, labeled with a cute sticker, and allegedly created from water she actually lounged inside of. The national discussion about her gamer girl bathwater spread like wildfire, and soon after, Instagram deleted her entire account. They stated that her account was being removed due to community guideline violations. The fact that Instagram got rid of her profile caused fans to wonder if the deletion was connected to her gamer girl bathwater sales.

Since Instagram isn’t a huge fan of Delphine’s unique formula, it’s no longer possible to keep up with her there. There are, however, plenty of fan accounts filled with pictures of Delphine from the last few years, but none of the fan accounts on Instagram actually belong to her. The most-followed Delphine fan account on Instagram currently has over 736,000 followers, but its most recent post was uploaded in February of 2021. That’s almost a year without fresh content, even on her fan accounts.

It costs $35 per month to subscribe to Delphine’s OnlyFans. Based on the teaser image at the top of her profile, many fans will find the price well worth it, as it seems she’s truly baring it all.

Delphine was born in Oct. 1999, making her 22 years old this year. Her mother gave birth to her in South Africa and she grew up in Cape Town with devout Christian parents.

When her parents split up, Delphine moved with her mother to England, where they settled down in Lymington, Hampshire. As a youngster, Delphine loved watching YouTube personas and parody videos, all of which likely inspired her to develop her online persona. She attended Priestland School until the age of 14, when she chose to drop out after dealing with cruel cyberbullies online. Her classmates poked fun at her based on the dark humor jokes she posted on the internet, and the torment caused her to feel totally isolated on campus.

Delphine ultimately had to be treated for depression due to the circumstances she was facing at school. Before taking on her cosplay-loving, super flirty online persona, Delphine made ends meet working as a barista, babysitter, and waitress.

We know Instagram wasn’t necessarily happy with Delphine’s online behavior, but is she still an avid user on YouTube? She launched her YouTube account in 2016 with a simple makeup tutorial. Most of her old content no longer exists on her channel. In fact, very few videos remain on her YouTube page, which, as of now, only contains three short ones, the most recent of which was posted 10 months ago.

One of the videos is an announcement to her fans letting everyone know that she is “back” on the internet. The next is an announcement to her fans that she would soon begin posting true pornography to her OnlyFans account. The video includes footage of her twerking on a bed while wearing fishnet stockings, kissing another girl, and trying on outfits comparable to lingerie. In the third video, she gives a tour of her sex toy collection, which is filled with whips, shackles, paddles, and more. She currently has over 2.09 million followers on her YouTube channel.

Delphine is still on Twitter, but hasn’t been active in a very long time. Her last tweet went up in February of 2021. She has over 1.5 million followers on the social media app, where she playfully reveals, via her bio, that she likes to pretend to be a cat. A lot of the content posted to her Twitter account features her wearing different colored wigs, varying from pink to blue to green. In very rare instances, you may even catch a glimpse of her naturally dark hair.

Is Belle Delphine still on TikTok?

Unfortunately for TikTokers who hope to see Delphine on the popular video sharing app, she was banned from TikTok sometime in 2020. The reasons for her account’s removal are unknown, but it’s most likely because she violated one of the community guidelines. TikTok is supposed to be a kid-friendly app, and since a lot of her content isn’t considered kid-friendly, it makes sense that she is no longer allowed on the platform.