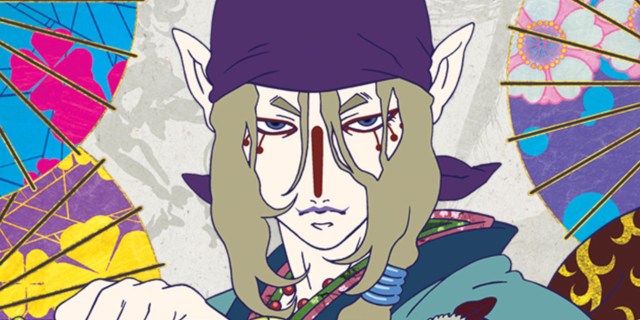 In recent years, many companies have moved into the anime streaming space, and each is doing its best to bring Japan’s best anime to American fans. One such company is RetroCrush, a streaming platform that focuses on older anime, from shows released during the 1990s and the early 2000s to cult classics from the 1970s and 1980s, Retrocrush has a surprisingly deep catalog, full of legendary and beloved titles.

With this catalog comes a slew of inventive horror series. So, if you want to watch something scary this Halloween, here are the best horror anime on RetroCrush.

Based on the videogame of the same name and written by Ayana Itsuki, Nightwalker: The Midnight Detective effortlessly fuses the horror and detective genre. It is set in a world where demons possess humans and devour their souls, forcing their hosts to commit crimes as they do. In response, an agency called N.O.S. is formed to investigate and prevent these crimes.

The series follows Shido Tatsuhiko, a vampire who also works as a private investigator. Shido has little memory of their life before becoming a vampire. However, as the series continues, more of Shido’s past is revealed. Featuring some neat visuals and a fun twist on the “good vampire” trope. Nightwalker: The Midnight Detective is a fun and atmospheric series.

9. Requiem from the Darkness

Hitting screens in 2003 and based on Natsuhiko Kyogoku’s short story collection The Wicked and the Damned: A Hundred Tales of Karma, Requiem from the Darkness follows Momosuke. Momosuke is a writer who aims to write one hundred ghost stories. While searching for inspiration, they encounter the Ongyou, a trio of detectives investigating these old stories to learn their truth and bring those responsible to justice. Each time Momosuke meets the Ongyou, they see things they shouldn’t, putting them in a horrible situation.

Featuring an incredibly unique storyline, Requiem from the Darkness puts an exciting twist on the ghost story genre. This show will stick with you long after the credits roll.

Released in 1988, this OVA is based on the novel by Hideyuki Kikuchi. The OVA follows Kyoya, a young man who is given a seemingly impossible mission. Many years ago, Kyoya’s father, Genichirou, battled Rebi Ra, a man who had allowed himself to become possessed by demons in exchange for power. The fight between Genichirou and Rebi Ra turned Tokyo’s Shinjuku ward into a demon-infested hellscape. However, when Rebi Ra returns and attempts to kill the world president in the hope of opening a portal to the demon world, Kyoya must do what his father couldn’t and kill Rebi Ra.

Featuring some stunning visuals, Demon City Shinjuku is a fun fantasy horror series with some good action scenes and some very memorable locations.

An atmospheric romp with fantastic visuals. Puppet Princess has the perfect fall vibe, making it great for those who don’t want intense scares this season.

Created by manga trailblazer Go Nagai, Devil Lady, or Devilman Lady as it is also known as a fantastic slice of late ’90s horror weirdness. Following on from Nagai’s Devilman series, this story follows supermodel Jun Fudo. While Fudo is famous, she has a dark secret: she has strange genetics, and her genes could be the key to the next evolution of humanity. However, this condition is also shared by a series of superhumans. Unfortunately, these superhumans are losing control of themselves and going on massive rampages. Jun gets recruited by a shadowy group and is tasked with destroying these other humans before they can cause more damage.

A gripping plot with lots of twists and turns, Devil Lady is another example of why Go Nagai is considered one of the most creative brains in the medium’s history.

Based on the manga written by Peach-Pit, Zombie-Loan hit screens in 2007. The series follows Michiru Kita, a girl with Shinigami Eyes. This power allows her to see a ring around people’s necks, and this ring tells her when that person will die. However, when Michiru encounters two boys who appear dead to her Shinigami Eyes, despite clearly being fine, Michiru is confused. She soon learns that the boys are actually dead. However, they made a deal with the mysterious Zombie-Loan. This deal means they get to stay alive but must hunt down zombies to pay off their debt. The boys team up with Michiru and attempt to pay off the debt as quickly as possible. However, this throws them into a much bigger mystery.

With loveable characters and a neat premise that twists several classic horror tropes, Zombie-Loan is a fun, fast-paced experience that gets better the longer it runs.

Vampire Princess Miyu has had two anime adaptations, but the 1988 OVA is considered the superior version. Based on the manga by Narumi Kakinouchi and Toshiki Hirano, this series follows Miyu, a vampire girl who has been chosen to banish the Shinma from the world. However, due to her status as a vampire, Miyu is trapped between two worlds, the human world, and the demon underworld, meaning that Miyu must endure a lot of emotional pain while on her quest.

A cool twist on classic vampire and monster-hunting formats, Vampire Princess Miyu is a fun story with a relatable protagonist.

This legendary OVA from 1987 was written and directed by Hisayuki Toriumi. Set in the 23000th century, it follows the crew of a spaceship called Saldes. This ship is sent to investigate a distant planet. The ship’s crew is put into cryogenic sleep to make the journey more manageable. However, when they wake up, things quickly go wrong as two members of the expedition are revealed to be imposters, and a strange lifeform has somehow got on board the ship and is slowly killing the crew one by one. Even worse, it seemingly can impersonate anyone it has killed, meaning everyone is a suspect. A fun blend of Alien and The Thing, Lily C.A.T. is an excellent anime featuring some terrifying monster designs and chillingly tense scenes.

A modern classic, Boogiepop Phantom is based on the light novel series by Kouhei Kadono. Rather than a usual narrative, Boogiepop Phantom tells its story through an ensemble cast who have short, often fleeting interactions with the main events. Many years ago, the city was rocked by a series of horrible murders, and many people blamed these murders on the Boogiepop, a mysterious figure that is rumored to be the embodiment of death. Now several girls have gone missing, leading to people thinking the mysterious Boogiepop has returned.

Featuring a unique, desaturated visual style, Boogiepop Phantom is an experience. The ensemble cast and the fractured storyline are unlike anything else ever released, and the entire show has a deliciously creepy atmosphere.

A cult-classic series, Mononoke was animated by Toei Animation. The series is set in feudal Japan and follows the mysterious Medicine Seller. The Medicine Seller roams the land, looking for evil Mononoke to slay. However, this isn’t an easy task, as before the Medicine Seller can banish a Mononoke, he must learn three things about them, their shape, truth, and reasoning.

This whole series is packed with incredible monsters, all of which are presented in a surreal manner that perfectly captures the feeling of encountering something that disobeys our laws of reality. The anime also has a unique visual style that resembles classical Japanese art. This means that Mononoke is one of the most original anime to arrive on screens.