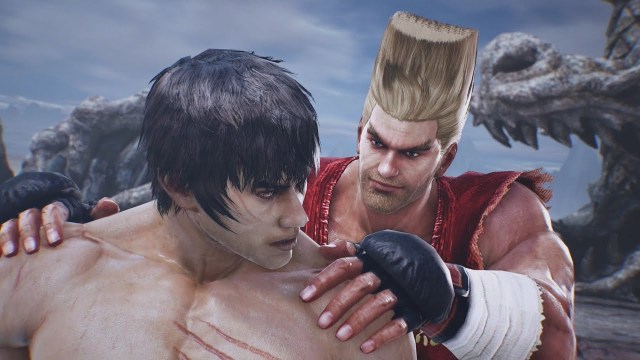 Sticking closely to the plot of the events of Tekken 3, the story follows Jin Kazama on his journey to The King of Iron Fist Tournament where he will compete in the hopes of finally defeating Ogre in a vengeance mission after the death of his mother, Jun.

Many fan favorites were announced to appear in the anime, including Jin’s father and grandfather, Kazuya and Heihachi Mishima. Other popular characters from the video game include: Nina Williams, Paul Phoenix, Ling Xiaoyu, and Hwoarang.

However, there are some very popular characters that were not present in the anime, much to many fans’ disappointment. There’s no word whether Tekken: Bloodline will have more seasons in the future, but if it does, here are 10 video game fighters that fans will definitely want to see.

Rich, spoiled, and absolutely dangerous, Lili rose to prominence after her debut in Tekken 5: Dark Resurrection. The Monaco native is the daughter of an oil tycoon, and behind all the glamour she’s accustomed to, she is a terribly ruthless fighter. She quickly became one of the most famous female video characters after her introduction to the franchise, and is equipped with a self-taught fighting style that borrows elements from her background in ballet and gymnastics. She has a rivalry with fellow teenager, Asuka Kazama.

Noted for his impeccable and stylistic fighting technique, which is rooted in the Brazilian Capoeira martial arts, Eddy is one of the most famous characters in the Tekken franchise. Exhibiting a very refreshing and level headed personality, Eddy joins the King of Iron Fist Tournament to carry out his revenge plan against the people responsible for the death of his father. He and Christie are responsible for popularizing the art of capoeira to western media.

King I and II

Easily identifiable due to his jaguar mask, King is one of the most iconic Tekken characters of all time, appearing in all video game releases since 1994. The Mexican professional wrestler with a loyal heart is known for his defensive fighting style, and his grapple and throwing techniques. It should be noted that he does appear in the series, but only in a brief cameo.

Kuma and Panda are both bears enlisted by Heihachi Mishima for protection. Kuma is also Heihachi’s pet and is in love with Panda, who serves to protect Ling Xiaoyu. Both bears exhibit human-like tendencies and have the same fighting style. Moving forward with the video game series, they each come into their own, and can be very dangerous when pushed over the edge.

This Irish bombshell is sister — and pain in the butt — to Nina Williams, one of the original characters from the video games. Unlike her cold and ruthless sister, Anna is friendly and flirtatious, and is shown to exhibit some merciful traits during battle. Her sibling rivalry with Nina stems from believing their father and trainer showed her older sister more affection, which leads her to dislike them both. Anna has been praised for her personality, skills, and storyline, and if the anime adaptation will proceed with more seasons, this would be a worthwhile plot to touch on. Anna has a brief cameo appearance in the anime series.

It’s unknown why the Chinese-American who is purely fueled by his finances didn’t make the anime series, especially as he’s very close friends with Paul Phoenix. Law debuted in the original Tekken video game and was quickly noted to have a fighting style similar to revered martial artist Bruce Lee. He has joined The King of Iron Fist Tournament several times due to financial constraints, with the exception of Tekken 2, where his motives were mostly vengeful in nature. Marshall appears in a brief cameo in the anime.

Another expert at capoeira is Christie, whose grandfather was Eddy’s trainer. The two characters have a special friendship and an unwavering loyalty to one another. Unlike many characters in the video games, Christie is a very cheerful girl, who fights only when absolutely necessary. The Brazilian martial artist has a heart of gold, and would quickly become adored by viewers should she appear in any subsequent seasons.

Steve Fox is a British boxer and the son of the assassin Nina Williams, and Anna’s nephew. He was introduced in Tekken 4 and is considered by his mother to be an inconvenience. He was conceived through in vitro fertilization as part of a super soldier experiment by Heihachi Mishima. He escaped the medical facility as a young boy and was adopted by British parents. If the producers carry on with subsequent seasons, Steve Fox would be a nice introduction to the anime as a part of the development of Nina and Anna. The character also has a mysterious past that he can’t seem to get a hold of in his memory. He is also great friends with Paul Phoenix and Marshall Law and really only wants to spend time becoming a better fighter.

Many fans believed the anime would feature the illegitimate son of Heihachi Mishima. Lars is a bit of a polarizing figure in the video games, as he has a deep hatred for the central character Jin Kazama. However, his motives are pure as his end goal is world peace. He also strongly dislikes his father, but has a deep affection for his adoptive brother, Lee Chaolan.

The suave and handsome womanizer Lee Chaolan is the adoptive son of Heihachi and brother to Kazuya and Lars. He is a businessman with a cunning wit and enormous wealth. If Tekken: Bloodline continues on, the introduction of Heihachi’s other children will no doubt prove a successful plot point in the anime. When he isn’t partying or spending his fortune on beautiful women, Lee is performing his kicking fighting style on his opponents.