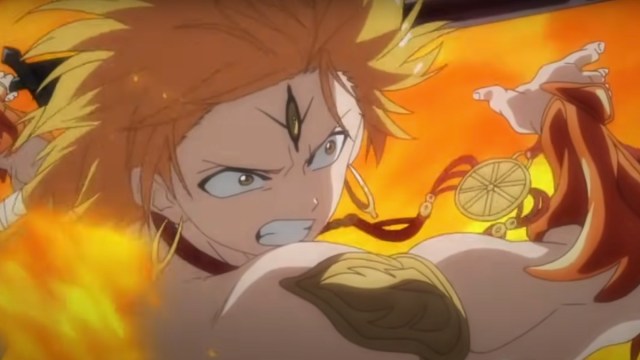 Warning: The following article contains spoilers for Magi: The Labyrinth of Magic, Magi: The Kingdom of Magic, and the Magi manga series.

Have you ever read a book or watched a movie in which a main character has no discernible flaws? Despite many of us wanting to be this idealized version of a human who looks and acts perfect and never makes any mistakes, we’re also bored to death by them. Although we enjoy stories about fictional heroes who win at life, we also appreciate the occasional setback that comes their way, because it makes them more relatable to our own experiences. In the end, no one is more lovable than a character you don’t always have to take too seriously, like anime Magi: The Labyrinth of Magic and sequel Magi: The Kingdom of Magic‘s deuteragonist Alibaba Saluja.

Magi‘s flame-knife-wielding secondary hero really is the whole cool-but-still-human package. He’s brave, kind, smart, and talented, while also being dorky, awkward, insecure, and comical. He struggles with feelings of guilt and inadequacy, faces romantic difficulties and setbacks, and is an emotional binge-eater when depressed. Overall, he’s someone who many people — especially those in his age range — can relate to. So, without any further ado, let’s dive into answering some questions fans may have about Magi‘s golden-haired, golden-eyed doofus.

What are his origins?

Although he rises to great heights at a fairly young age, Alibaba Saluja began his life in a very humble setting. During a flashback in Magi: The Labyrinth of Magic, we discover that he was born to a sex worker and raised in the slums of Balbadd, along with adoptive brother Cassim and sister Mariam. A while after his mother’s death of an unknown illness, he finds out that he’s the illegitimate son of the King of Balbadd, who comes by to bring him to the palace.

Within the confines of the royal palace of Balbadd, Magi‘s peasant-turned-prince studies scholarship and swordsmanship while unwittingly gaining his father’s favor for the kingship. However, when an accidental tip-off to Cassim about the palace’s hidden tunnel leads to a break-in, resulting in the theft of the royal treasure and the speed-up of his father’s death, he flees his home country in disgrace, leaving the throne in the hands of his incompetent half-brother.

Following this, Alibaba becomes a cart driver for a low-life merchant, where he meets magi Aladdin in the first episode of Magi: The Labyrinth of Magic. Although his personality has taken a turn for the worse, with him descending into a survivalist lifestyle of cunning and cowardice to get by, he becomes a courageous character by the episode’s end, and departs down a path of adventure and heroism alongside friends Aladdin and Morgiana. While he does experience occasional setbacks into antihero territory (such as when he joins Cassim’s Fog Troupe, a misguided attempt to right Balbadd’s egregious social wrongs), he mostly stays on the right course, even changing Balbadd’s government from a monarchy into a republic when he gains political power.

What are his powers?

As early as the second episode of Magi: The Labyrinth of Magic, Alibaba displays great adeptness with a blade, revealing that he was a powerful fighter even before conquering the dungeon. However, after becoming a Dungeon Capturer and a King’s Vessel, he inherits a god-like level of power, receiving a flame-magic ability (contained inside a curved-blade Metal Vessel) through his Djinn Amon. His Djinn Equip, extreme magic move, Flame Minister’s Beheading Sword, can cut through anything. During his full Djinn Equip, his body becomes enswathed in fire (non-lethal to himself but deadly to others), and he gains the ability to fly, with his curved knife transforming into a giant black sword. He can even create a wall of flames to thwart enemy attacks, as well as being able to summon a vortex of flames capable of incinerating anything it touches. Pretty cool, huh?

Having inherited his adoptive brother Cassim’s magoi in Magi: The Labyrinth of Magic, our straw-haired secondary hero has twice the supply he once had. He also possesses the power of hyper concentration, which allows him to slow down his perception of time and see enemies moving at far slower rates than they actually are, giving him the time to really plan out his attacks. Furthermore, he relies heavily on the fighting skills of Household Member Morgiana, who uses her superhuman strength, speed, and agility as a Fanalis warrior, along with the flame magic powered by his Djinn Amon contained inside her Household Vessel (her former slave chains refashioned into armlets), to help him in battle.

Besides his supernatural and physical abilities, Alibaba is well-educated, with a deep knowledge of magic, languages, and economics. He’s also a fast reader and has even written a book, a self-flattering account of his life.

How old is he?

During the events of Magi, Alibaba is just a young man, with only 17 to 22 years under his sword belt. Considering his youthful age, his scroll-length list of accomplishments is quite impressive, even those not involving magic power.

Does he have a love interest?

Despite being handsome, educated, and social, Magi‘s fumbling deuteragonist struggles to find a romantic interest, a quest that he develops extreme anxiety around, with his unsuccessful attempts to connect with girls becoming a running gag as early as Magi: The Labyrinth of Magic‘s first episode. In fact, in one tragic chapter of the manga, the blonde goofball is led to believe that Morgiana has romantic feelings for him, only to realize that it was all just a baseless rumor. At the moment, it turns out, his pink-haired ally only cares for him as a friend who she wants to support in his mission, being grateful for his role in freeing her from slavery. This misunderstanding causes him to undergo a temporary emotional breakdown, with his fragile feelings on display for everyone to witness.

However, later on in the Magi manga, Morgiana does indeed develop romantic feelings for Alibaba, and they get married before the story’s end. Ultimately, we can’t imagine a better ending for these well-matched lovebirds who have saved and soothed each other through many a hardship!