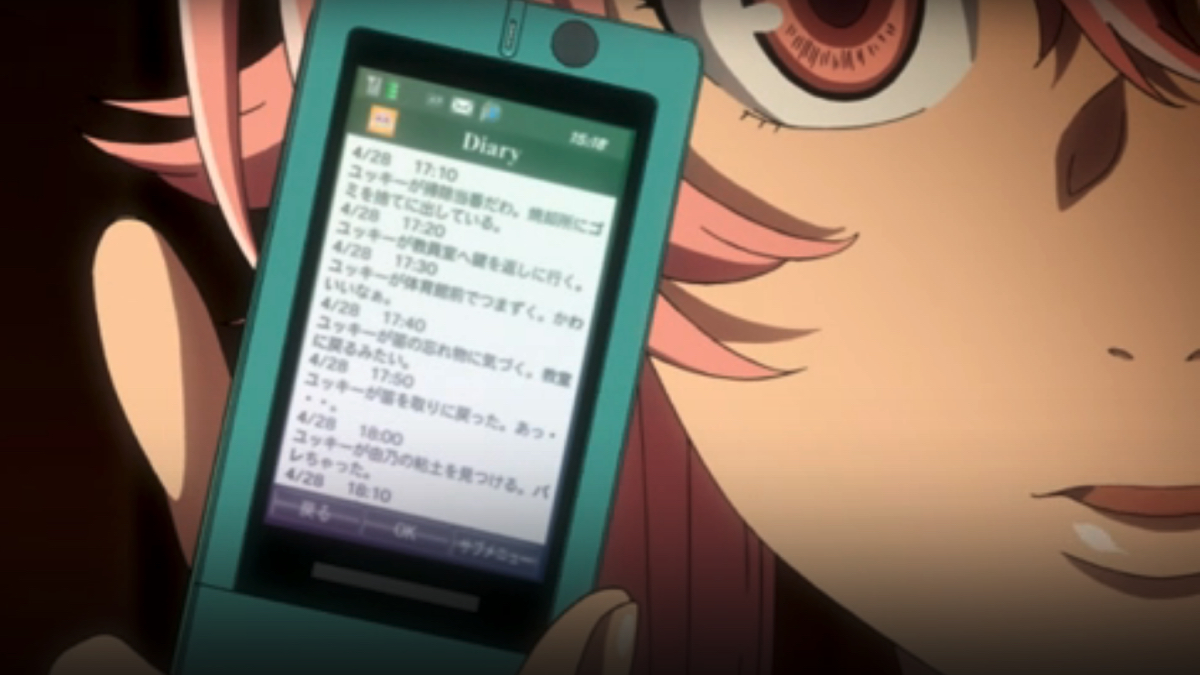 Wouldn’t it be great to have your very own communication device that could predict elements of the future? However, if a survival game were included as part of the deal, you’d probably rather trade it back in for the regular old version. Sadly, this isn’t an option for the survival-game contestants of anime Future Diary, who find themselves competing for the title of replacement God of Time and Space in the soon-to-expire deity Deus Ex Machina’s death game.

As part of the death match, each contestant is given a Future Diary, a communication device that provides clues about what may happen in the future. However, each Future Diary is different, with the divergences hinging on the personality and interests of each user.

To satisfy your curiosity, we’ve compiled a list describing each of the 12 Future-Diary contestants (ranked in reverse order by their assigned numbers in the survival game) along with any Apprentice-Diary (a Diary powered by a Future Diary that can predict the future, but without the same risks and rewards) holders (ranked in reverse order by their amount of screen time) who appear, as well as their distinct personalities and type of Future Diary (and, when applicable, the Greco-Roman deity upon whom they’re based).

Although she’s often cheerful and polite, Mao Nonosaka nurses a darker side, sometimes revealing a willingness to commit violence, both strategically and spontaneously. She’s also a keen photographer and knife-wielder. Her Apprentice-Diary cell phone is called “The Hinata Love Diary,” keeping track of the subject of her romantic interest’s possible future.

The neglected daughter of 10th, Hinata Hino is willing to resort to trickery and violence to earn his attention, utilizing his “Breeder Diary” to try to eliminate Yuki, Yuno, and Akise. However, she’s loyal to her friends, which soon include Yuki and Akise. Her Apprentice-Diary cell phone is dubbed “The Friendship Diary,” predicting future conversations with her friends.

Although genius detective Aru Akise shows impressive deductive-reasoning skills even without a Diary, he eventually gets one, “The Detective Diary,” a cell phone that makes predictions based on those of other Diaries. Although he’s normally cool and collected, his feelings for Yuki are a chink in his armor, making him vulnerable.

Former bully-turned-friend Ouji Kosaka has an inexplicably high sense of accomplishment. His Apprentice-Diary cell phone, “The Kosaka King Diary,” predicts any likely personal achievements in the future. However, since he gives himself credit for even the smallest of victories, the Diary’s effectiveness is greatly reduced. It also only lists potential successes without mentioning any possible failures.

Calm, sarcastic, and intelligent, Orin Miyashiro is Eighth’s assistant. She uses her Apprentice-Diary cell phone, “The Orphanage Diary,” to predict the actions of Eighth’s orphans.

An orphan raised by Eighth, Tarou Nanba feels indebted to her. This loyalty prompts him to utilize his Apprentice-Diary cell phone, “The Copy Diary,” to fight on her behalf. The Diary has the ability to mirror the powers of other Diaries after making a connection.

A loyal, placid, and adept secretary working under 11th, Ryuji Kurosaki has an Apprentice-Diary cell phone, “The Secretary Diary,” which predicts the mayor’s future actions. It isn’t susceptible to the same misinformation as “The Watcher Diary.”

Obsessed with justice and being a superhero, Yomotsu Hirasaka strives to realize his dream, even while facing bullying for his efforts based on his blindness. He relies on an audio-recorder Future Diary known as “The Justice Diary” to relate any “acts of injustice” likely to be committed in the future. Its weak-point is that it predicts anything its owner considers to be an injustice, which ranges from petty to serious misdeeds. Hence, since Yomotsu can only hear one prediction at a time, news of more critical injustices is delayed, thus giving his targets more preparation time. However, his Future Diary does grant him a hypnosis ability and advanced hearing, which come in handy.

As Sakurami City’s mayor, John Bacchus is ruthless and manipulative, willing to stoop quite low to realize his ambitions. He plans to give everyone in his city an Apprentice Diary via a supercomputer powered by Eighth’s “Blog Diary.” That way, he can achieve “omniscience” by having access to all of that information. He’s also fine with killing for convenience as well as survival, and is eventually revealed to have inspired the idea and technology behind both Future Diaries and the survival game.

John’s Future-Diary tablet, “The Watcher Diary,” gives him access to other Diary holders’ information, making it easy for him to combat his enemies. That being said, it can’t predict his own future unless another Diary does and can’t discern between facts and misinformation. Also, other Diary holders can rewrite their entries to trick his device, thus gaming the system.

Neglectful of his family and obsessed with his dogs, Karyuudo Tsukishima is too busy feeding his treasured pets steak and wine to be an active contestant. Thus, he lends his Future-Diary cell phone to his daughter Hinata Hino for use. Known as “The Breeder Diary,” his device alerts the user regarding possible futures for his attack dogs and the people they encounter, allowing them to control the canines through voice commands and use them to take out other survival-game participants. However, it’s challenging for the Diary’s holder to concentrate on controlling too many dogs at once, making it necessary for him to rely on a supercomputer to monitor them while his daughter directs them in groups in person.

As a wanted terrorist and hardcore survivalist, tough, jaded, and violent bomber Uryuu Minene has a Future-Diary cell phone that reflects her life of crime. Dubbed “The Escape Diary,” it reveals the best course of action for her potential escape, thus lessening her chances of receiving a “Dead End.” That being said, her propensity to land herself in trouble lowers the likelihood of achieving a clean exit, making it necessary for her to fight, something the Diary doesn’t tell her how to optimize. Although she has a tragic past, eventually revealing a softer side to certain people, she’s still willing to kill combatants and bystanders alike.

Presiding over an orphanage, Ueshita Kamado is kind, peaceful, and maternal, putting the needs of others before her own and planning on making the world a happier place if she ascends to godhood. Although she has no desire to fight in the survival game, her Future-Diary blog (set up on a laptop computer), “The Blog,” “Server,” or “Propagation Diary,” allows supporters to fight on her behalf. People who she allows to connect to the blog’s server can become Apprentice-Diary holders. Furthermore, she can replace the devices if they’re destroyed, but they can’t function if the server is down and are allotted based on a certain number of blog posts. Unfortunately, her Future Diary itself can’t predict the future at all, not even a potential “Dead End.”

This mushy yet kick-ass couple is fun to watch in action, being comprised of chivalrous hot-head strongman Marco Ikusaba and romantic badass knife-thrower Ai Mikami, who are both equally devoted to and adept at having each other’s backs. Metaphorically joined at the hip, the pair also share a Future Diary, albeit on separate cell phones. Their Diary is dubbed “The Exchange Diary,” allowing the duo to predict each other’s futures. Sadly for the loved-up pair, their codependency (while cute) is their ultimate downfall, since their devices are much less effective when they’re separated (although their destruction isn’t linked).

Despite her outwardly helpful facade, Tsubaki Kasugano, embittered by a terrible childhood, hides a jaded, angry, and manipulative personality. Already willing to order her followers (of the Omekata cult) to commit atrocities, she plans to destroy the world if she ascends to godhood. Her Future-Diary scroll, “The Clairvoyance Diary,” allows her to see predictions of the future through her followers’ eyes from both near and far in terms of time and distance (although it’s subject to their misperceptions). Despite that advantage, her scroll’s size makes it an easy target for attack, not to mention that its bevy of information can be overwhelming. She’s also visually impaired and doesn’t react well to unexpected changes.

Although he seems like a normal five-year-old, Reisuke Houjou is anything but, concealing a sociopathic nature beneath his childish facade. Despite his age, he’s a mastermind, displaying the ability to utilize poison gas and electricity toward his murderous goals. His coloring-book Future Diary, “The Hyper Vision Diary,” provides information (conveyed through drawings and words, delivered at the same time) regarding three things he will do that day, with a separate action taking place at morning, noon, and evening. However, although he has ample time to plan, the Diary limits him to performing just three optimized attacks per day. Also, notwithstanding his genius and enjoyment of the survival game, he’s still only a child.

A police officer with a tough and upbeat demeanor, Keigo Kurusu possesses a Future-Diary cell phone called “The Criminal Investigation” or “Case Diary.” The Diary provides thorough predictions about his future criminal investigations in his assigned prefecture, but it can only offer this information regarding any investigating that may occur within that area alone. To top it off, it loses its power if its user loses legitimate police authority, and requires him to invest plenty of time and resources to achieve optimal results. Despite not enjoying needless violence and wanting to protect innocents, Keigo is willing to resort to it for his family’s sake (although his workaholic nature frequently keeps him away from them), even at the expense of betraying former allies.

Juggling a job as a math teacher and another as a serial killer, Hiyama Takao is a busy man, with his cool and collected attitude hiding his murderous instincts during daylight hours. Since his unpaid job claims most of his passion and concentration, his Future-Diary cell phone is thus called “The Murder Diary” rather than “The Math Diary,” predicting the whereabouts of whomever has the misfortune to be his next likely victim. The Diary also grants him immunity to bullets and bombs. However, it fails to predict his targets’ future actions.

The product of an abusive childhood, Yuno Gasai struggles with her mental health, displaying psychotic, delusional, controlling, manipulative, and violent tendencies. Her unhealthy obsession with Yuki allots her a stalker-friendly Future-Diary cell phone, “The Yukiteru Diary,” which provides predictions concerning his future within 10-minute intervals. Unfortunately, it doesn’t reveal her own possible future at all, unless it intersects with Yuki’s or a potential “Dead End.” Despite her propensity to lash out whenever her grip on him is threatened, she often emits a friendly and loving aura while in his company. Throughout the survival game, she shows adeptness with just about any weapon, including knives, swords, axes, and guns.

Anxious, introverted, and self-deprecating “nice” boy Yukiteru (“Yuki”) Amano prefers to be a mere bystander in his own life. His Future-Diary cell phone, “The Random” or “Indiscriminate Diary,” reflects this attitude, predicting the future of his surroundings. However, it ignores Yuki himself unless he’s facing a potential “Dead End,” cementing his unfortunate reliance on the unstable Yuno Gasai and her “Yukiteru Diary,” and is subject to his perception of truth. That being said, his quick reflexes and dart-throwing skills, along with his willingness to kill if he or his loved ones are threatened, allot him some personal leverage.