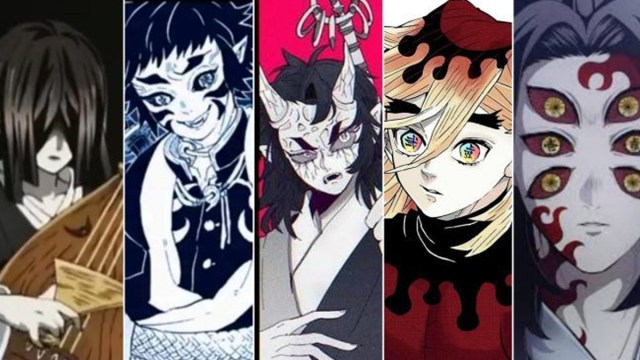 The hugely popular Demon Slayer anime is about a boy named Tanjiro Kamado who is on a life-saving mission after a demon kills his entire family, leaving only his sister behind. Nezuko is bitten and turned into a demon herself, but somehow retains her humanity. Tanjiro decides to join the Demon Slayer Corps to avenge his family and find a cure for his sister.

The demons, as with vampires in other lore, drink human blood and die in the sunlight. The first demon in existence was Muzan Kibutsuji, known as the Demon King. As the first of his kind, Kibutsuji is the progenitor of all other demons. While all demons came from Kibutsuji’s blood, not all of them are created equal.

Depending on how much of Kibutsuji’s blood they consumed, some of the demons are stronger, with the 12 strongest demons known as kizuki, or demon moons. They’re divided into Upper Ranks and Lower Ranks, with each demon possessing different skills and abilities. The ranking can be confusing, and some lower ranked are more powerful than other higher ranked, so here’s a little guide to help remember the least to most powerful demon moons.

Kyogai originally held the title of Lower Moon 6, but after his death, Kamanue is summoned to take over. Kamanue doesn’t last long, as he was consumed by the Demon King after scoffing at his demands.

As a demon, Mukago has red stripes on her face and white horns on her head. She is cowardly and plans to run away instead of facing the Demon Slayer Corps. Like Kamanue, Mukago is killed immediately by Kibutsuji.

Watching Kibutsuji kill two of the other Lower Moon demons in front of him, Wakuraba attempts to flee, showing his extreme speed. Despite his speed, he was no match for the Demon King, who chops his head off in an instant.

As with most of the other Lower Moon demons, Rokuro is killed pretty handedly by Kibutsuji for begging for the Demon King’s blood in order to become stronger. Kibutsuji takes his pleading as an order and quickly puts him in his place, killing him on the spot.

Enmu, known as Lower Moon 1, is the only surviving Lower Moon demon, after Kibutsuji slaughters the rest, then tasksEnmu to hunt and kill Tanjiro.

Enmu has the ability to put people to sleep, manipulate their dreams, and kill them from within their dreams.

Otherwise known as Upper Moon 6, Kaigaku was once a demon slayer who trained with Jigoro Kuwajima. After facing off against Kokushibo, the most powerful of the 12, Kaigaku surrenders and becomes a demon.

As a demon, Kaigaku has flame-like marks on his face, pointed ear and black fingernails. He possesses extremely quick reflexes and speed. He was a thunder breather as a human, but as a demon, he can manipulate actual lightning and use it as a weapon.

Rui was a young, sickly boy from a wealthy family. Despite his parents love and devotion for him, when Kibutsuji offers to turn him into a demon, Rui accepts, becoming Lower Moon 5. He appears calm and polite as a human and a demon, but is sadistic and enjoys torturing people. He is guilt-ridden after killing his family and wants to replace them by creating himself a demon family, but when one disobeys him, he strings them up and burns them in the sun.

As a demon, he has spots covering his face. Rui uses a spider web that is strong enough to cut through almost anything. He has the ability to control the demons he created with his blood. Due to his sadistic nature and love of murdering, he is considered the Demon King’s favorite demon.

As a human, Gyokko is a serial killer who murders countless people, all while believing he is innocent. After murdering a small child, the child’s parents stab him and leave him to die, but he is found by Kibusuji, who turns him into a demon.

Gyokko is a disformed demon, with two mouths in place of his eyes, and two eyes in place of his forehead and mouth. He has the ability to turn fish into demons to attack his enemies. He can also use teleport using decorative pots.

Nakime is ranked Upper Moon 4 who was once a biwa musician married to a gambling addict who sells their possessions to feed his addiction. After he gambles away her performance dress, Nakime snaps and kills him. She discovers that she performs better after killing him, so she continues to kill people before each performance.

She happens to target Kibutsuji to kill before one of her performances. Impressed by her skill, the Demon King offers to make her into one of his demons. As a demon, Nakime has one large eye, that is pink in color and has the number four etched on it.

Akaza is powerful in hand-to-hand combat, serving as a martial artist in his human life. He has extremely fast regenerative abilities, has increased perception and can create powerful shockwaves. Akaza displays superhuman endurance and high resistance to pain even as a human, which only increase exponentially once he is a demon.

He creates a cult, where he listens to the prayers of his followers and uses them to feed his hunger. Outwardly, he appears friendly and caring, but Doma has zero empathy for anyone, regularly feeding on anyone and everyone.

His abilities include cryokinesis, meaning he can generate ice with his flesh and blood, and not only on his own, but also with his folding fans.

Kokoshibo is the oldest, the most revered, and the most feared demon moon in the anime. He is a powerful and respected member of the Demon Slayer Corps, but also extremely jealous of his twin brother. Certain powerful demon slayers possess a demon slayer mark on their face, but Kokushibo’s has two marks. He was turned into a demon by Kibusuji centuries before the events of the anime. Unlike most demons who slaughter their human families after they turn, Kokushibo does not kill his wife and children.

As a demon, Kokushibo possesses six eyes. He uses moon breathing to create crescent moon blades to attack his opponents. Even as a demon he carries his former demon slayer blade and modified it with his own flesh and blood.