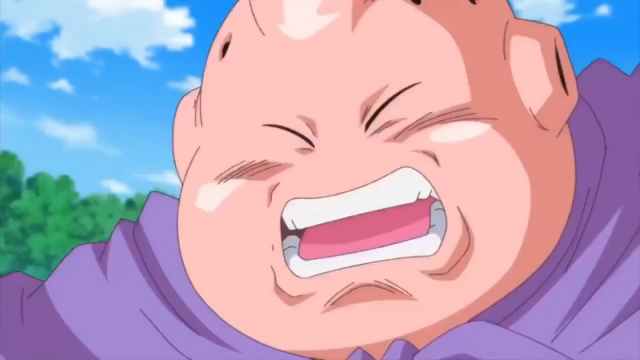 The long-running anime franchise, Dragon Ball, is known for many different things, energy-based attacks, stretched-out fights, and lots of powerful characters among them. One way that the anime manages to stretch out its story is by introducing characters who have the ability to change their forms, and get stronger whether through training, absorption, or fusion.

One character who changes forms over the course of their appearances in the anime is Majin Buu. Majin Buu was introduced in the Majin Buu Saga of Dragon Ball Z. While he was the main villain of only a few of the sagas, he did manage to transform a few times, so let’s take a look at all his transformations, how powerful they were, and what caused him to transform. However, because of the confusing nature of whether or not Dragon Ball GT is canon, we will not be including the form, Majuub, introduced in that series, or any other form not addressed in any of the main anime.

This is the first form of Majin Buu that we see in Dragon Ball Z. The character was released by the evil wizard Babidi, who gathered the power of all of Earth’s strongest heroes to release him. Majin Buu or Innocent Buu, as he has come to be known, is the version of Buu who could be controlled but barely wanted to fight, opting to turn people into chocolate for him to consume instead.

This Buu gets his shape from Grand Supreme Kai, who prior to Buu’s imprisonment he absorbed. He is pink and fat, like a giant marshmallow. He also wears puffy white pants which have the Majin symbol, something which is common between the Buus. Innocent Buu would not be the main version of the Buu we know, that honor is saved for his next form.

Buu or Good Buu as he is known is the result of a split between the good and evil inside Buu. Innocent Buu spent his time on Earth befriending Mr. Satan AKA Hercule, so when Mr. Satan was shot he was distressed and split the two parts of himself so he could be with him. He looks like Innocent Buu and has a similar but less evil personality.

Good Buu might be the least powerful of all the Buus and he was absorbed by Evil Buu after the pair separated, suppressing the good inside Buu but amplifying his power. He would be the main form of Buu to survive the events of Dragon Ball Z, living peacefully among the people of Earth with Mr. Satan.

Evil Buu is the first form on this list to be a departure from Majin Buu, as he is not pink but gray. Again Evil Buu is the result of Buu splitting his good and evil parts. Evil Buu is one of the forms seen briefly in Dragon Ball Z as he debuted in the Fusion Saga and quickly rid himself of this form by absorbing another. Even though this gray and skinny form of Buu is by no means Buu’s most powerful form, he is inherently evil and managed to redirect Good Buu’s Transfiguration Beam which was intended to turn Evil Buu into chocolate. As Good Buu was turned into chocolate Evil Buu had no trouble absorbing him and turning into our next form.

Super Buu is the result of Evil Buu absorbing Majin Buu or Good Buu. This version of the character was introduced in the Fusion Saga of Dragon Ball Z acting as its main antagonist. Super Buu is muscular as opposed to fat or skinny. Regaining his pink hue, Super Buu was less like Majin Buu and quite evil. He was promised a fight against Earth’s greatest fighters and so he turned up to Kami’s Lookout only for Piccolo to stall him. Piccolo needed time for Goten and Trunks to train in the Hyperbolic Time Chamber so he told Super Buu to defeat the other humans on Earth.

From atop The Lookout he estimated how many people he would have to kill and unleashed a Human Extinction Attack, throwing out tendrils and killing every human on Earth, except for a few who were able to dodge them and Mr. Satan. This version of the character was impatient and loved to fight but lacked Majin Buu’s nature. He fought a few characters while he was Super Buu and managed to absorb some of the fighters to achieve new forms of Super Buu.

The next form of Buu was achieved after Super Buu fought against Gotenks, again in the Fusion Saga of Dragon Ball Z. After fighting Gotenks while they were in their Super Saiyan 3 form, Super Buu was able to determine that they were powerful. So when he struggles to fight against Ultimate Gohan, he tricks Gotenks into reforming and absorbs them and Piccolo to achieve this form.

While fighting Gohan in this form he proved to be more powerful than him, and he even taunted him using the memories of Piccolo and his brother Goten. But eventually, the fusion of Goten and Trunks deformed and so did Super Buu. While his form took on the fusion form’s vest when they deformed Super Buu resembled Piccolo, gaining his cape. Because he was less powerful than he was previously he sought to absorb another, further elevating his form.

This version of Super Buu had absorbed all of the fighters from the previous form and Gohan who had become Ultimate Gohan at the time. He became Ultimate Buu after Gohan failed to catch the Potara earring which Goku threw toward him. While Gohan was looking for the earring Buu saw his chance and took it, absorbing Gohan.

Goku then uses the earring to fuse with Vegeta, into the form of Vegito. Vegito was able to fight Super Buu successfully but allowed themselves to be absorbed by Super Buu so they could set the people Super Buu absorbed free. Super Buu also briefly has a form inside himself, but we will not count that as a separate form because technically it is just Super Buu inside his own body. When Goku and Vegeta deformed inside of Super Buu, they managed to free Gohan, Trunks, Goten, and Piccolo, but they also – despite Super Buu’s protests – removed Majin Buu from his body as well. This would be the last time we see Super Buu.

This is a rare version of Buu that we only get a brief glimpse of in Dragon Ball Z. Before Buu was imprisoned he fought a few of the Supreme Kais as Kid Buu. After defeating a couple of them he fought the South Supreme Kai and unfortunately absorbed him, becoming Huge Buu. Ultimately this form would be brief because soon after he absorbed South Supreme Kai he absorbed Grand Supreme Kai and transformed into Innocent Buu, and he was imprisoned soon afterward. Huge Buu would make a brief appearance after Goku and Vegeta removed Majin Buu from Super Buu’s body, before turning into our next form.

Kid Buu is the original and last form of Majin Buu that the fighters have to face in the Kid Buu Saga of Dragon Ball Z. This form of Buu is pure evil, unencumbered by anybody he has absorbed yet. He is short compared to his other forms, but what he lacks in height he makes up in sheer power. Kid Buu has a childish, sociopathic personality and once he arrives he blows up Earth. On the Sacred World of the Kais Goku and Vegeta attempt to battle him separately and while Goku in his Super Saiyan 3 form manages to go toe to toe with this form of Buu, he quickly loses energy and Kid Buu gains the upper hand.

Ultimately Goku asked the people of Earth to lend him their energy for one giant Super Spirit Bomb. While Kid Buu was holding his own against the Spirit Bomb, Shenron refreshed Goku back to his normal Super Saiyan state, long enough for him to push the Spirit Bomb into Kid Buu, killing him. That would be the end for the pink-colored monster, except Goku made a wish, leading to our next form.

Just before Goku defeated Kid Buu he wished for Buu to be reincarnated into a fighter of equal power so he could fight against a character that strong again, with one caveat, that this fighter would be a good person. His wish would be granted by King Yemma and in the epilogue for Dragon Ball Z, a decade after he defeated Buu, Goku encountered a young boy named Uub at the 28th World Martial Arts World Tournament.

After Goku battles him in the first round, he convinces Uub – after guaranteeing that Mr. Satan will give his village money so they don’t starve – to come with him and train. Uub briefly appears in Dragon Ball Super but as it is set before the epilogue of Dragon Ball Z, he is too young to fight or for Goku to train.

Even though Buu did not appear in many episodes of Dragon Ball Z he did go through many forms before living in peace in his gooey peaceful Good Buu form. The way the new Dragon Ball Super films are going, it would not be too surprising if they introduce another form of Buu down the line, maybe even via Uub, but for that, we will have to wait and see.