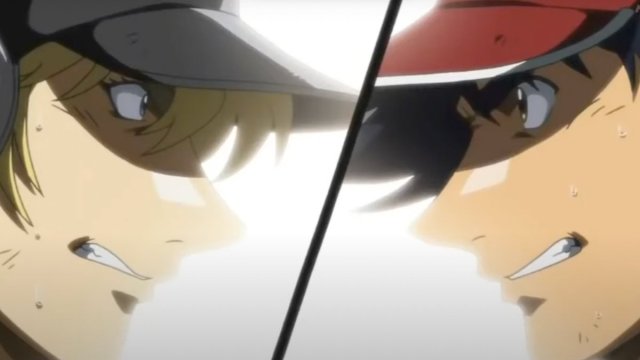 Baseball is big in America, but it’s not the only place where hardball is a hit.

Though it never took off in places around Europe, baseball has made a huge impact on countries such as Japan, and that pipeline has come into Major League Baseball as well.

So it makes sense that the wide world of anime sports a whole slew of baseball-centric adventures. Some, just like US-based baseball movies, are focused on the actual game and the nitty-gritty intricacies. Several others, though, focus on the characters in and around the game and the familiar sports tropes of overcoming adversity, winning as an underdog, and even serve as a vessel to tell tales about society. Some last several seasons and go deep into a ton of storylines as well.

We waded through the tall grass to find the10 best baseball anime of all time so you don’t have to go the full nine innings to see what’s worth taking a swing at, and what’s better left behind. Ready? Play ball, and press play!

Let’s start our list with something completely different from the rest of it — baseball in space. Let’s just say that a team of misfits has to take on alien teams as representatives of Earth — and they’re playing for more than just the pride of Earth — the hero of the story, Ikki Sawamura, finds out he has some alien blood in him, which gives him special abilities and the touch that the Blue Planet’s team needs.

We’re gonna go to a movie that not many may have heard of these days, but if you were a baseball fan in the 1990s for sure you know the title well — Rookie of the Year. A kid gets a special ability to pitch amongst men in that movie because of an injury, granting him special powers so to speak while hailing from a legend in his family, his mom. In Miracle Giants, Domo Shinjo is a kid as well — a 10-year-old ballplayer — and while he doesn’t have a tragic injury that gives him special powers, he inherits it via family line, as his father was a notorious player for the Yomiuri Giants. Domo gets his own contract with the Giants, and because of his magical pitching, he’s able to play against grown men — and win.

Following the story of nine baseball players, this isn’t what it seems on the surface. This series follows nine girls who form their club to compete with and eventually defeat the boys’ clubs. The team is led by the daughter of a former pro baseball player, Ryo Hayakawa, so there’s some baseball flowing in her blood to help lead the team forward – and every great team needs an ace pitcher.

She deals with some hardships, especially in learning some salacious rumors about her father and his time in the pro leagues, and on top of this, there are some real near-tragic moments happening in almost every episode as the series goes on. But, the public rallies behind her and the rest of the team, and it’s some classic ‘90s anime to the core.

A different take on the sports or baseball story, this follows a gambler and reckless character named Toua Tokuchi. The team at the heart of the story — the Saitama Lycaons — desperately want to win a championship, so they go out recruiting the best of the best, which is how they come across Toua.

It seems that Toua has a supernatural ability when it comes to pitching, as he doesn’t possess the best fastball but somehow his guile and instincts allow him to rack up a record-winning streak of 499 wins in the street game version of baseball in this anime, known as One Outs. It’s definitely something to indulge in if you’re looking for a different take on just about everything related to baseball and anime.

It’s been said that baseball is a family game. From generations rearing the next to play the sport, to taking the whole family to the ballpark to soak up the sport, family is at its heart. That’s the story here – two stepbrothers with immense talent team up to strive for their dream together while elevating their high school team to restore its glory days.

A great sports story revolves around more than one character (as do many rom-coms!), with diverging personalities, philosophies, and even approaches to their craft as a microcosm for how they go about their day-to-day life. Cross Game expertly balances two main characters who embody a lot of what we see in athletes in the world, both professional and amateur.

There is the extremely-blessed-with-talent player who takes things for granted, doesn’t have the highest work ethic, and gets by on talent alone a lot of the time. On the other extreme is the scrappy, gutsy, determined player with the heart of a champion who outworks everyone else to stay in the game, but lacks the natural gifts and talents bestowed upon more athletic players.

Enter Aoba Tsukishima and Kou Kitamura playing these roles, and of course, there is a sibling-slash-love interest that binds the two of them despite their differences. Aoba is the underdog, working and proving himself over and over, while Kou has all the skills to be one of the greatest, but doesn’t have the diligence to hone his craft. And of course, Aoba’s sister, Wakaba is linked to Kou, which in the end, brings the budding duo together.

If you’ve seen The Sandlot, or Major League, or, ok we won’t make a list, but basically, there is always a bully (or a whole team of them) in sports movies, because the protagonist needs something and someone to overcome. Plus, along the way, we as an audience need to know that doing things the wrong way doesn’t pay, whereas being respectful and diligent will win out in the end.

That’s the case here in this series that features a team of bullies who can’t win, but decide to pin their troubles on one kid — Ren Mihashi. Mihashi is resigned to suffering their bullying until he does the unthinkable for a sports movie — quit. He even leaves his current school to get away from it all and enrolls in another school with no real inclination to get on the diamond again. Of course, the sport pulls him back in as the squad at the new school invites him to join the team and he accepts.

The best anime have a wonderful sense of humor, and if you’re a baseball fan then this no doubt will fulfill everything you’re looking for. We have a young protagonist who we follow through trials and tribulations of defeat, feeling unworthy, being overwhelmed, and yet fighting against the odds to pursue his dreams (and — being anime — vengeance). The stories follow more than the main character, Eijun Sawamura, though, which gives the audience a chance to root for more than one person — or root against them, as the case may be.

For those not deep into baseball nomenclature, no, battery does not refer to the energy-giving device that powers so many of our electronics. It’s actually the term used for the tight-knit relationship (and even kinship, some might say) between a pitcher and his catcher. This is a great metaphorical tale for life, with two Japanese kids working and learning together on the mound and behind the plate. The pitcher, Takumi Harada, is heavily recruited and widely known as a prodigy. The catcher, Gou Nagakura, comes into the story a little later, but is the force that brings out the best in Takumi, and vice versa, naturally. Takumi isn’t able to break free of his smalltown family life, and is stuck pitching on a squad where no teammate can match his skill level, especially anyone trying to catch his unique pitches. That’s when Gou comes to save the day – and the team, as the two become great battery mates while learning even more about life along the way.

Consider this one the New York Yankees of anime. Through six seasons, and some spinoff movies, too, Major really goes deep in thoroughly exploring not just the career but the entire life of a pro-ballplayer. Starting from when he’s in kindergarten, Major follows its lead, Gorou Honda, on his journey from little tyke all the way through to making the majors (the Japanese pro league, that is).

It’s a family story built around generations to boot, which brings the nature of baseball back to its core — uniting families and cheering for underdogs to overcome the odds against them, internally and externally.

Gorou’s father — Shigeharu —plays a pivotal role in it all with his own intertwined storyline as a once-legendary pro baseball player who loses his grip on his pitching skills because of an injury. Does he just give up though? No way. Thanks to a bit of humor that becomes serious, Shigeharu decides to become a hitter since he can no longer pitch.