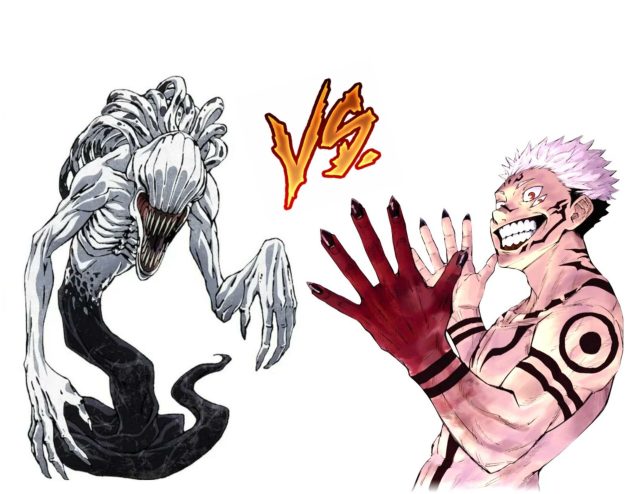 Illustration by Brandy Cruz via Crunchyroll

Who would reign victorious in an all-out battle between the Queen of Curses vs. the King of Curses? That’s the question on the minds of Jujutsu Kaisen fans, especially seeing the destructive force behind both Curses.

While Ryomen Sukuna has dominated the anime series as the King of Curses, viewers were able to witness the consuming power of Rika Orimoto as the Queen of Curses in Jujutsu Kaisen 0. Both are seemingly all-powerful Curses, but in a one-to-one battle, who could dominate?

Sukuna is a powerful Curse who was thought to be destroyed 1,000 years ago by several powerful sorcerers. Instead, Sukuna’s spirit lived on inside his 20 fingers, each finger containing a small portion of his power. While trying to protect his friend, Yuji Itadori swallows one of the fingers, which sets the Jujutsu Kaisen anime series in motion. The present-day sorcerers are allowing Yuji to remain alive long enough to consume all 20 fingers, so they can eliminate Sukuna once and for all.

Rika is introduced in Jujutsu Kaisen 0, set one year prior to the events of Jujutsu Kaisen. An innocent young girl, Rika transforms into a vengeful spirit following her death. The beautiful girl turns into a monstrous-looking Curse, with a large body, tendrils, and a large mouth with razor sharp teeth. Rika’s Cursed spirit haunts Rika’s childhood friend Yuta Okkotsu, growing increasingly violent when she feels her friend is threatened.

Sukuna is an extremely powerful Curse, but also skilled in hand-to-hand combat. He has immense strength and speed, with quick reflexes and durability. He can regenerate lost limbs almost instantly. He can create and manipulate fire, even at long distances. Sukuna is highly intelligent and can devise a strategy against techniques after only seeing them used once. Even in an incomplete state – Yuji has only swallowed 15 fingers – Sukuna is easily the most powerful being in the anime series.

Rika is powerful enough that even by just manifesting her arms, she can easily defeat jujutsu sorcerers. Fully manifested, Rika can use physical and jujutsu attacks. She is powerful enough to rip gigantic spirits apart with her hands. By simply commanding them to die, Rika can cause other Curses to explode. She also has the ability to summon the Snake Eyes and Fangs megaphone belonging to the Inumaki family. This technique gives her the ability to further increase her commands. She can mimic other Curse’s abilities and is said to have immeasurable power.

Though unlikely, if the two powerful Curses were to ever face off, it may be the greatest battle in the history of anime.

With the right – or wrong – moves, the fight would be anyone’s ballgame. But all things considered, with both considered to be the best, Rika is still an inexperienced amateur compared to Sukuna. In the end, Rika’s feelings for Yuto could prove to be her downfall, something Sukuna would use to his advantage. Sukuna’s millennia of experience and intelligence would give him the upper hand.