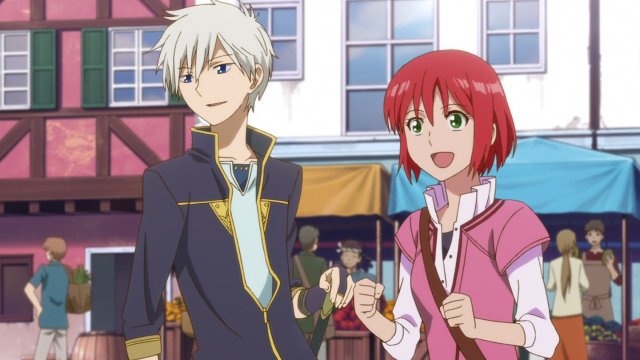 Anime fans have been waiting for the last five years for a third season of Snow White With the Red Hair to be released. Shirayuki is your typical herbalist in Tanbarun. She is not like most of the residents though, as she has very beautiful red hair that makes her stand out in a crowd. It is so beautiful in fact, that in her youth she is often told to be cautious when deciding whether and how to let it show in new or unfamiliar places.

One day, her hair catches the attention Prince Raj, and upon seeing how beautiful it is, he orders her to marry him. She refuses as she believes he is only after her for her hair and nothing else, and subsequently ends up cutting off her hair. She escapes to a new kingdom and becomes friends with Prince Zen. Upset that she refused him, Prince Raj tries to poison Shirayuki with an apple that instead ends up being eaten by Prince Zen.

Luckily Shirayuki saves Prince Zen, and the two start to fall in love during their adventures through all of the bonding time spent together. Once Prince Raj starts to realize his own feelings for Shirayuki, he works to have her fall in love with him by bettering himself and becoming a man suitable for her. Fans were captivated by this love triangle and were on the edge of their seats to see what happens next, which begs the question, will there ever be a third season?

Will Snow White With the Red Hair get a third season?

Although the show became an instant classic, and a show that fans eagerly awaited, the show did not generate enough return for the production company — thus the hold on a new season. Bones Studio also had a lot of other successful shows at that time, and wanted to put their attention and resources towards those shows. Fans still have high hopes that there might be a reboot of the show, but unfortunately, it does not look like there will be one soon. The earliest likely possibility is in 2024, so fans should stay tuned for updates.

The writers left season two open with lots of different ways to take the show. The most likely theory according to fans is to watch Prince Raj continue to try to elevate himself and become a better person for Shirayuki, while fans watch the love between Prince Zen and Shirayuki continue to blossom.