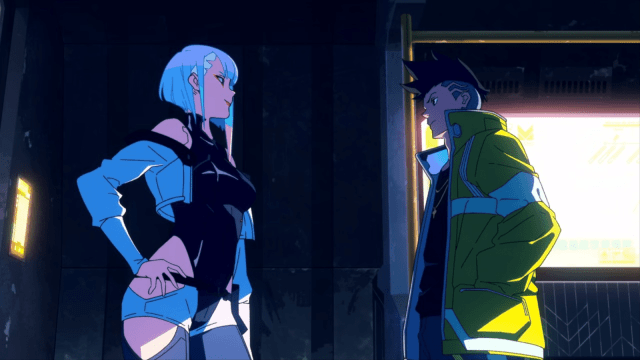 Cyberpunk: Edgerunners has turned out to be a smash hit of an anime on Netflix, with critics and fans singing high praises for the Cyberpunk 2077 spinoff series. Naturally, this has led to more and more interest in the Cyberpunk universe and an increasing number of new viewers tuning in to see what all the fuss is about.

Those that haven’t played Cyberpunk 2077 may get a little bit lost with some of the language and technical terms used in the anime. While the show does a decent enough job of allowing the story to explain Cyberpunk terminology, it may take a couple of episodes to get completely onboard with all the slang and tech-talk the anime has to offer.

So we’ve come up with a spoiler-free dictionary of sorts for you to bone up on before diving into the brutal world of Cyberpunk: Edgerunners, which can get you going on the series without skipping a beat. Here’s the key terminology, in alphabetical order.

Commonly abbreviated as “BD,” braindances in real-world terms are recorded virtual reality experiences of individuals. The world of Cyberpunk takes this to another level with said experiences being actual memories. Those that view the braindance will experience the memory exactly as it happened, with all of their senses engaged and feeling what the subject feels, right down to their thoughts. Braindances have a variety of applications in the Cyberpunk universe, but Night City’s criminal underbelly is known to produce braindances featuring acts of violence or sexual intercourse. These extreme braindances are abbreviated as XBDs.

“Ain’t no other editor who churns out BDs that sweet and preem.”

This can be gathered from context, but “choom” is simply street slang around Night City for a friend. Liken it to homie, pal, buddy, chum, etc. Like its real-world synonyms and depending on the situation it is used in, it can be used as a term of endearment or in a belittling or threatening manner.

“The case was filed as a cyberpsychotic incident.”

These are Night City residents who work as mercenaries and outlaws. They live a life of crime and are generally anti-establishment, scraping by from gig to gig for people that need dirty work done. Living in constant danger in an extremely hostile city, cyberpunks tend to augment their extremities and faculties to better suit them for a life of combat. Synonym: Edgerunner.

“You guys…are cyberpunks, aren’t you?”

A colloquialism for the currency used in the world of Cyberpunk, the Eurodollar. The whole world of Cyberpunk revolves around how many Eddies you have in your pocket, the city’s first responders will literally refuse to help those in distress if they don’t have an insurance policy of some sort.

Gonk is an in-world synonym for an idiot. Like choom, gonk can be used to call out an individual behaving in such a manner, or as a playful jab towards a friend or acquaintance.

“You should ask the gonk next to me.”

This is an acronym for Intrusion Countermeasure Electronics, which is the most advanced form of security in the Cyberpunk universes internet infrastructure. Think of it like a firewall, and only the most exceptionally skilled hackers and netrunners are capable of penetrating ICE to access the data hidden behind it.

“ICE is harder to break through than I thought it’ll be.”

Individuals who possess a deep understanding of the internet and computers, Netrunners are highly intelligent agents who can plug their consciousness into the internet and roam through and manipulate it at will. The Cyberpunk 2077 lore entry on Netrunners describes them as just as dangerous as a corporate soldier armed to the teeth.

“I’m wondering. Are you a real netrunner?”

These are practitioners who trade in and install cybernetic prosthesis and augmentations on their clients. The quality of a ripperdoc’s work tends to boil down to their ability, clinic, and how much clients are willing to pay them, and they are often willing to price gouge. Clients will generally fork over the extra eddies, considering ripperdocs more often than not hold their clients lives in their hands while they work.