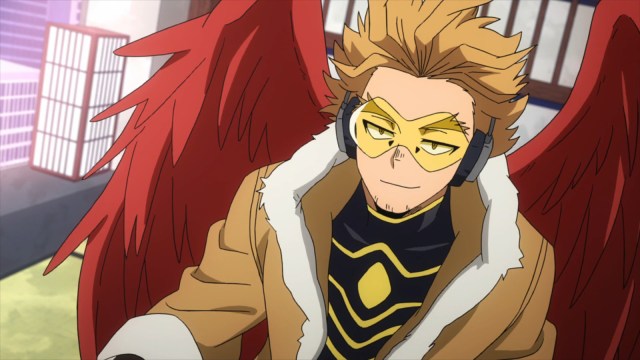 My Hero Academia continues to stun viewers by killing off and majorly injuring well-liked characters. In a war, this is expected, but it is nonetheless disconcerting, especially when it comes to a fan-favorite, like Hawks.

In episode five, after Hawks’ encounter with Dabi, Fumikage Tokoyami flies in to rescue his mentor, effectively managing to get the winged hero to safety. But by that time, the damage was already done — Dabi had burnt Hawks’ wings to dust, dealing severe injuries to the hero’s back. As Dark Shadow dreadfully stated, Hawks’ wings are now gone.

For a hero that relies on his wings for combat, this is a major blow, and viewers are rightfully concerned about whether Hawks can come back from this. Will Dabi’s attack permanently retire the winged hero, or will Hawks’ feathers grow back in due time? Needless to say, there are spoilers below.

Do Hawks’ wings grow back?

As established, a key part of Hawks’ Quirk is that he can control each individual feather on his wings, using them not only to fly but to rescue and attack others as needed. If he uses up too many feathers, his ability to fly is affected, which we’ve seen happen before. However, after a few days, the feathers usually grow back, and the wings return to their full glory.

Unfortunately, fire-wielding villains are the worst possible match-up for Hawks in battle, since flames are his wings’ only weakness. With flames that burn at over 3600ºF, Dabi’s attack causes irreparable damage, and Hawks’ wings are unable to grow back fully — even Recovery Girl, with her incredible healing Quirk, is powerless to help in this situation.

Thankfully, this setback does not keep the hero away from the battlefield permanently. After recovering from the injuries dealt to his body, and coming to terms with his wings’ valiant yet failed attempt at growing back, Hawks finds an alternative that allows him to take flight once more. In the manga’s Final War arc, All for One mocks the hero, revealing that he now uses prosthetic wings and the impairments Hawks endures as a consequence.

Using the prosthetics, Hawks can’t quite maintain the high-speed flight he was previously used to, which proves frustrating and hinders his abilities. Additionally — because misfortunes never come singly — Hawks can no longer rely on his feather blades, and instead has to use katanas as substitutes. This isn’t quite the comeback most fans desired for the hero, but alas, we work with what we have. Prosthetic or not, the audience can expect to see Hawks’ wings again.