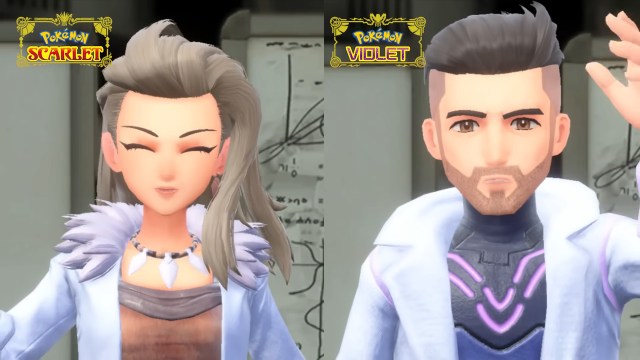 The internet is collectively thirsty for the two newest Pokémon professors introduced in Pokémon Scarlet and Violet, the latest game in the franchise. Every generation of Pokémon gives us new monsters to collect, worlds to explore, and a new Pokémon professor to help offer guidance to new trainers. Most games come with one professor, but in Scarlet and Violet, the copy you choose decides which professor you will meet during your new Pokémon journey.

When the new professors, Sada and Turo, were introduced, fans couldn’t help but notice the two were ridiculously good-looking. The Pokémon franchise has certainly had hot professors before, but something about the Paldea region professors in particular has gamers all hot and bothered.

In honor of the release of Scarlet and Violet, we took the chance to rank the hottest Pokémon professors for your viewing pleasure. While this ranking might not be comprehensive, it certainly is sexy.

Professor Laventon made his first appearance in Pokémon Legends: Arceus and while we appreciate his style, he’s not exactly what we’d consider hot. Laventon is more of a wacky uncle than someone we’d want to go out with. We wouldn’t mind if he hooked us up with one of those cool pom-pom hats, though.

Professor Elm has his moments but the Johto Pokémon professor was not designed with attractiveness in mind. Elm is one of the more hands-off professors, barely making an appearance in the main plot of his respective games, and not much is known about him other than that he’s a little more scatter-brained than the other professors. This clumsy professor has a special place in our hearts for giving us our first Cyndaquil but we can’t rank him any higher because we just don’t know him enough.

Professor Oak is the quintessential Pokémon professor and while he isn’t unattractive, he does give off grandfather vibes which keeps him low on the ranking. Oak is definitely one of the most helpful professors as he introduced us to the world of Pokémon and we will always respect him for that. While we don’t personally find him hot, there’s definitely someone who does.

Professor Magnolia is professor in the Galar region and while she doesn’t do much in her respective game, she does look cool. This is one stylish lady and we would love to a tour of her jewelry collection. With her dignified demeanor and kind eyes, we know Magnolia is a catch. Magnolia gets bonus points for her love of the corgi-inspired Pokémon, Yamper.

Professor Rowan has a gruffer, more serious demeanor than other Pokémon professors and his introduction in Pokémon Diamond and Pearl is considered by many fans a turning point in the series. Rowan is the first professor to have such a commitment to personal style he refuses to wear the customary lab coat and some believe that his sharper character design ushered in an era of better-looking Pokémon professors. We have a soft spot for a man with authority and Rowan has it in spades.

Notable for being the first woman Pokémon professor, Professor Juniper was introduced in Pokémon Black and White. Juniper has one of the most likable personalities in the games, as she’s smart, fun, and self-assured. Aside from her intelligence and kindness, fans also noted Juniper has a very motherly look to her — which could be a pro or a con depending on what you’re into. While we’re not personally into that, there’s certainly people that are, given the impressive amount of Juniper fanart on the internet.

While he might be a Pokémon researcher only in the Pokémon Go games, Professor Willow has gathered many fans of his ruggedly good looks. With gear straight from a sporting goods store, Willow is one of the more outdoorsy professors. After an in-game kidnapping plot (yes, really), Willow returned with a new look that some fans adored and others were less impressed with.

He might not be a stereotypical heartthrob, but Professor Birch is a wholesome kind of attractive. The Hoenn professor rocks cargo shorts, flip flops, and a satchel, so you know he means business in the fashion department. Jokes aside, Birch looks like the type of guy who would be kind to everyone he meets and you know he’d be happy just sitting on the couch with your favorite movie or video game. Birch is the guy you’d take home to your parents, and that certainly counts for something.

When Professor Sycamore was first announced in Pokémon X and Y, the internet immediately dubbed him the hottest Pokémon professor. Admiration for the professor’s obvious good looks has died down some in the last few years, but he’s still undeniably a handsome man. Sycamore’s look seems vaguely based off of the indie bands of the late 2000s and we can totally see the appeal of going to a local concert with the Kalos professor.

She may not be the main professor in her games, but Professor Burnet earns that title through her extensive research on Ultra Wormholes. First appearing in the Alola region, Burnet is an outgoing, loyal person and is married to the (also hot) Professor Kukui. We respect her undying thirst for her husband and we also appreciate Burnet on her own as a badass Pokémon researcher.

We all knew Professor Turo would rank high on this list. The man clearly takes pride in his appearance and why wouldn’t he, with such a solid canvas to begin with? His haircut and lab coat look positively expensive, and while he might walk around in what’s essentially a futuristic wetsuit, that’s only a problem if you let it be. We would love to attend a lecture taught by this professor.

Professor Sada is the prehistoric half to the futuristic Professor Turo and is equally as hot. We adore Sada’s sabertooth accessories, perfectly coiffed hair, and the steely look in her eyes that shows she means business. Just like her Violet counterpart, Sada is almost too attractive. It’s no wonder fans collectively lost their minds over these two good-looking professors.

Sonia starts out as an assistant to her grandmother, Professor Magnolia, but becomes a full-fledged Pokémon professor in her own right at the end of Pokémon Sword and Shield. Sonia is an enthusiastic Pokémon researcher who is determined to succeed, and we can’t help but admire that quality. She’s also definitely the cutest professor on this list with her heart clips in her hair and her infections smile. We can’t decide if we want to be her or date her.

The top spot in our ranking goes to Professor Kukui of Alola. This Pokémon professor has got it all: an easygoing, sweet personality, battle savvy, and abs of steel. The only professor on this list to also be the champion in his region, Kukui knows his stuff when it comes to Pokémon. He’s good with kids, he’s athletic, and he’s essentially a superhero — how can we not swoon?