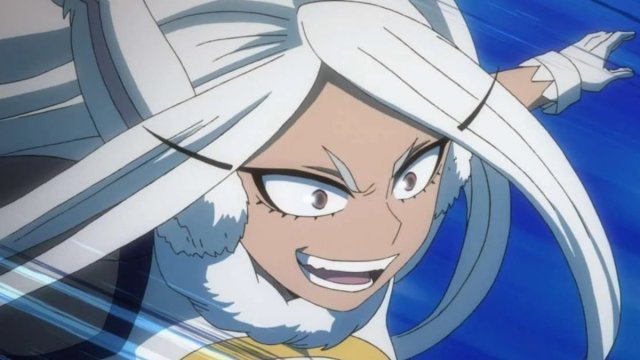 Rumi Usagiyama, otherwise known as Rabbit Hero: Mirko, took the My Hero Academia world by storm as she showed off her mad skills in season 6, episode 2 of the anime series.

Mirko is the top female hero in the anime series. Ranking number five overall, she possesses the quirk “rabbit,” which gives her extreme speed, strength, agility, and hearing. While she’s a supporting character, she really had the opportunity to shine in the episode titled “Mirko, the No. 5 Hero,” with fans now calling her the greatest of all time (GOAT).

People aren’t called GOAT for no reason, so how strong is Mirko?

While the other heroes are outside the building, Mirko decimates an army of Nomu before breaking into Doctor Kyudai Garaki’s lab, killing Johnny – the teleportation Nomu the mad scientist uses to teleport people away from him. Mirko is then attacked by Mocha, a Nomu used to slow her down long enough for Garaki to activate five High Ends before hiding.

Now facing five High Ends by herself, Mirko uses her acrobatic prowess to fight off the powerful High End Nomus while also trying to use her super hearing to find Garaki’s location. Despite what they throw her way, Mirko keeps fighting, with the High Ends left shell-shocked that she’s able to keep going.

Using her legs of steel, Mirko kicks through the extremely powerful High Ends like nothing. Using a sort of telekinesis, one of the High Ends twists Mirko’s left arm like a corkscrew. Not even batting an eye, Mirko uses her deadly focus and intelligence to realize that the High End is attacking from a distance, which means he’s vulnerable close-up.

Jumping straight at him, Mirko wraps her legs around his head, dodging the lasers shooting from his eyes, and rips his head from his body. Only then does she take a second to wrap her arm with her own hair before turning her attention to the remaining High Ends, who are probably scared to death of the killer bunny.

To put her strength into perspective, Endeavor — the number one hero — was almost defeated by a single High End. The only reason he wasn’t defeated is because Hawks showed up to help, while Mirko took on five High Ends at the same time, had her arm destroyed, and kept going.