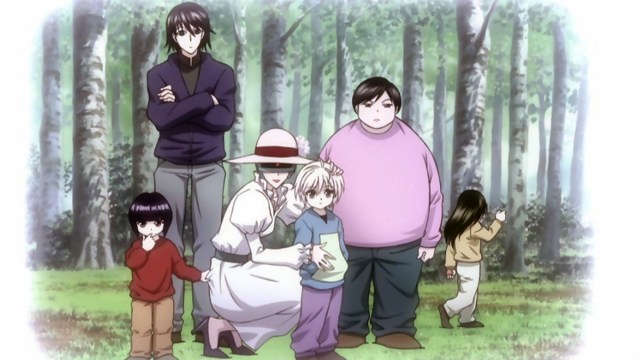 Hunter x Hunter is an anime and manga that includes some of the most intricate and complex familiar dynamics in the world of Shonen. Whether it is missing family members or a mutation between ants and humans, there is plenty to be uncovered in the world of Hunter x Hunter. One of the most interesting, mysterious, and complicated dynamics is undoubtedly that of the Zoldyck family.

The Zoldycks are an ancient family proficient in the art of assassination. Feared by most people across the world, the Zoldycks have a reputation for being ruthless and able to eliminate any target for the right price, regardless of their societal status or even how strong they are. Although the family’s popularity extends to every nitty and gritty part of the six continents, very little is known about the family itself. Pictures of the members are worth millions, and information is nearly impossible to discover. Naturally, as an audience, we still have quite the perk in getting to know this complex family, even if that information is still minimal. On that matter, every assassin in the Zoldyck family is ranked by strength- with a lot of speculation involved.

Very little is known about these characters, so much so that we don’t even know if they’re the same person. Maha is allegedly the great-grandparent of the Zoldyck siblings, meaning he is Zeno’s grandfather. According to his one cameo, he is still an active assassin, though he has only made one appearance in the story thus far. Ziggy, on the other hand, is the name given to the Zoldyck member who accompanied Netero to the Dark Continent, meaning he has to be a master in assassination and in Nen usage, even though it is unknown whether he is Zeno’s father, or if he is Maha himself. What is known about Ziggy, other than his successful expedition to the Dark Continent is that he often trained with Netero, the strongest hunter to have been introduced in the story at the moment of his passing. Due to the lack of information, and most likely the old age of these characters, as they would’ve been over 100 years old, they are currently sitting at the last spots on the list.

Alluka was first introduced in the 13th Hunter Chairman Election arc. She is the second youngest sibling of the Zoldyck family and the only daughter of Silva and Kikyo. As a well-kept secret for the entirety of her life, Alluka has remained hidden for 11 years due to her unique ability, until she was finally freed by her brother, Killua. Under unknown circumstances, Alluka was possessed by Nanika, a mysterious being from the Dark Continent. In reality, Nanika is quite possibly one of the strongest creatures in the world of Hunter x Hunter, however, once that ability is out of the way, Alluka is just an ordinary child. Unlike her siblings, Alluka has no Nen skills or abilities and hasn’t also received the usual assassin training.

Not much is known about the mother of the Zoldycks, other than the extremely sickening obsession she shares for her children, especially Killua, albeit with secondary motives. It has been revealed that Kikyo is originally from Meteor City, and therefore, any information regarding her existence is completely inexistent. However, mother Zoldyck is still an assassin, making it a fair assumption that the birth mother of the Zoldycks possesses advanced assassination techniques, just like her husband and most children. Kikyo is also a manipulator, much like her dark-haired kids with whom she shares her Nen type.

The second-oldest sibling in the Zoldyck family is definitely a complex subject of discussion. Much like every Zoldyck offspring, Milluki was raised to be an assassin from birth and thoroughly prepared for the art of assassination and torture. On the other hand, Milluki lacks physical strength, standing at a disadvantage due to his lack of stamina. Nonetheless, Milluki has made up for this with his extreme intelligence. Not only is he incredibly tech-savvy, but Milluki is also well versed as an inventor. As a hacker, programmer, inventor, and nen user, he is still a somewhat valuable tool for the Zoldycks and their connection to modern technology, although Milluki is still not respected by any other family member, even as a Manipulator.

The youngest sibling of the Zoldyck family shows quite the promise in the world of assassination, torture, and everything in between. Similarly to his sibling, Kalluto has undergone extreme torture in order to endure and possess high resistance to most poisons and electricity. He is also extremely well versed in assassination techniques, possessing incredible agility and physical strength. Kalluto is also fairly talented when it comes to mastering stealth, being able to fully conceive his presence even when spying on people stronger than himself, which is an incredibly rare ability in their world. As a fairly talented Nen user and Manipulator, the youngest Zoldyck has also managed to join the world-famous gang of thieves and criminals, the Phantom Troupe, at just 10 years old.

The most complex member to place on the list has got to be Killua. The third-youngest member has unbelievable potential to become the strongest Zoldyck in history for several reasons. For starters, Killua has received harsher training than any of his siblings, being taught to quite literally be a human weapon, whose body has even been modified to have his nails emulate sharp knives at his will. Not only is he a natural at the art of assassination, agility, stealth, and physical strength, being able to lift four tons at the start of the anime, Killua’s training has also made him immune to poison and with an extreme tolerance to electricity.

Killua is set to become the next head of the Zoldyck family business, not only due to his potential but also for his intellect and exceptional analytical skills. That is incredibly remarkable at such a young age, especially paired with his already proficient physical abilities. His prowess in Nen, being the only sibling who is a Transmuter, like his father and grandfather, has also granted him more power and strength, using electricity and speed as his main abilities while fighting. At the same time, Killua is still just 14 years old in the current events of the manga, therefore his journey to becoming even stronger is still in the works. For this reason, it is still not entirely confirmed whether he has become stronger than his oldest sibling, Illumi, or if he still has more to learn in order to finally be free of the Zoldyck shackles.

As far as the story goes in the anime, Illumi, the oldest sibling, appears to be the third-strongest member of the Zoldyck family, even though not by a long mile from his kid brother, Killua. Illumi’s strength comes from the usual training in the family- resistance to poison, high tolerance to electricity, great agility, and physical strength. However, Illumi’s power lies in his Nen ability as a Manipulator. His incredibly sinister Ren and powerful aura are enough to completely paralyze those around him.

Illumi has created an ability in which he uses nen-infused needles to manipulate anything and anyone he so wishes. By changing his own body to mind and body control, he can even take full control of a dead being. Capable of controlling dozens of targets at the same time, his power grants him a place as one of the strongest members of the Zoldyck family at the moment. Regardless of his powers, Illumi succumbed to the pressure of being the possible heir of the assassination business and was immediately deemed as an unacceptable heir of the Zoldyck family for his weakened state of mind.

The previous patriarch of the Zoldyck family is still one of the strongest members to have graced the family of assassins. Despite his advanced age, Zeno has made quite a dent in modern-day society in Hunter x Hunter. As a matter of fact, his name alone is enough to frighten anyone with knowledge about the underworld. The grandpa of the Zoldycks has the usual assassination training, much like his offspring. However, his Nen, En, and Ren, alongside his intellect, truly make him a nearly undefeatable opponent.

The mastery over Nen, Ren, and En has made him one of the finest users of Nen thus far introduced in the story. As a Transmuter proficient in Emission, Zeno has the ability to create dragons as a means of transportation and employ them in battle, causing devastating effects. Zeno also has one of the strongest En’s introduced in the story, being able to increase his En to a radius of 300 meters (approx. 984 feet). His calm and analytical mind makes him a particularly powerful fighter, able to completely wipe down groups of people in seconds.

The father of the Zoldyck siblings and current head of the infamous family is currently in his prime, thus making him by far the strongest family member currently living. As a world-renowned assassin, Silva is already extremely skilled in the art of assassination and everything it involves, including superhuman strength, speed, and control over his body. Although instances where he is actually fighting have yet to appear, his past feats show how incredibly strong he truly is. From killing an unknown member of the Phantom Troupe to dueling with Chrollo, the leader of the Phantom Troupe, without any visible injuries and an unknown result, Silva has proven to be nearly undefeatable, although extremely calculating as he only fights when he knows he has a chance to win.

As a Nen user, Silva is a Transmuter like his father and son, Killua. However, he has only been seen using Emitter abilities, emitting his threatening and bloodthirsty aura in two large orbs filled with frightening power. Every instance in which he appears fighting strongly indicates he has also mastered Enhancement. As an added bonus, Silva’s reputation comes from his ruthless nature. Unlike Zeno, who will only kill for money, Silva will not hesitate when prompted to kill, whether there is money involved or not. All of these factors together, make Silva the strongest living Zoldyck in the family by a long shot.

As Hunter x Hunter is still an ongoing series, the list of the strongest Zoldycks still imposes a possible changing variable, as the power scales are constantly shifting and changing, especially among the youngest generations. As hard as the list was to compile, one thing is for certain: a lot is yet to be seen regarding all of the Zoldyck siblings.