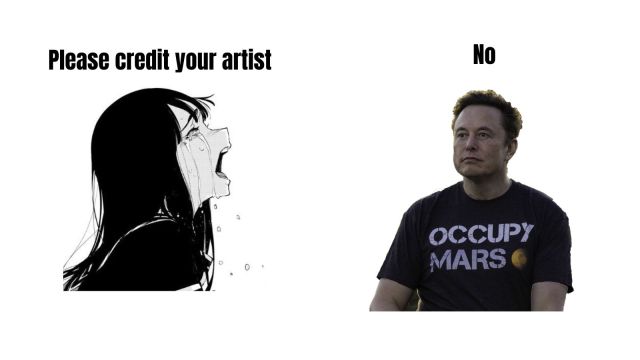 If there is one thing you need to know about the artist side of Twitter, it’s that they have specific conditions if you want to repost their art. Either you ask permission from the original creator, credit them, or don’t steal other people’s art. Twitter‘s CEO Elon Musk may have either forgotten that rule or not understood that subsection of his website, because a manga artist is now after him for using his piece of work without permission.

Kentaro Sato, the manga artist behind the crying girl featured in multiple memes, targetted Musk on Twitter when the billionaire reposted a meme that featured his work back in March. The artist quote tweeted the post and said that Musk needs to pay $1 billion USD to use his work on his account.

“Elon Musk, the new CEO of Twitter, has reprinted my picture on Twitter without permission, so please give me 1 billion for the usage fee. in dollars.”

The crying girl featured in the meme was originally from a manga illustration released back in Oct. 2018. Her name is Aya Asagirl from the Magical Girl Site manga series, found in chapter 103. This specific image blew up as a part of a meme in which she’d usually beg someone to do something for her, but the other would reject the request. People on Twitter were confused about Sato’s post, as they assumed he originally posted it online as a meme. Plenty of Sato’s followers asked for the original strip, which the artist provided.

What’s ironic about this is that, in a now-deleted Tweet, Musk said that he isn’t open to the idea of crediting artists. This is bad, since not crediting the artist makes it harder for them to get followers and possibly earn commissions from fans of their work.

According to CNBC, Musk backed A.I. lab, the company behind DALL E. That website uses artificial intelligence to create pieces of art based on a short description given by the user. People criticized Musk for not crediting artists and how he believed that giving credit “destroys the medium.” He’s willing to be hated if it means he can continue posting art without permission or credit.

And it’s not just art. Musk had a history of sharing articles without crediting the publication by only screenshotting the headline. Musk accused Hard Drive Magazine of “being woke,” after it poked fun at Musk for not crediting the original site and used comedy to fight back. Yikes. When will Musk learn that he’s the punchline? That’s why the jokes aren’t funny to him.

Twitter has a copyright policy to protect artists from having their pieces of work stolen. And since the art in question is from an official manga publication, Sato has the ground to file a copyright complaint against Musk if he wants to. It’s currently unknown if Sato will go after Musk in court. But for now, the internet can witness Musk breaking an official policy from his own website.