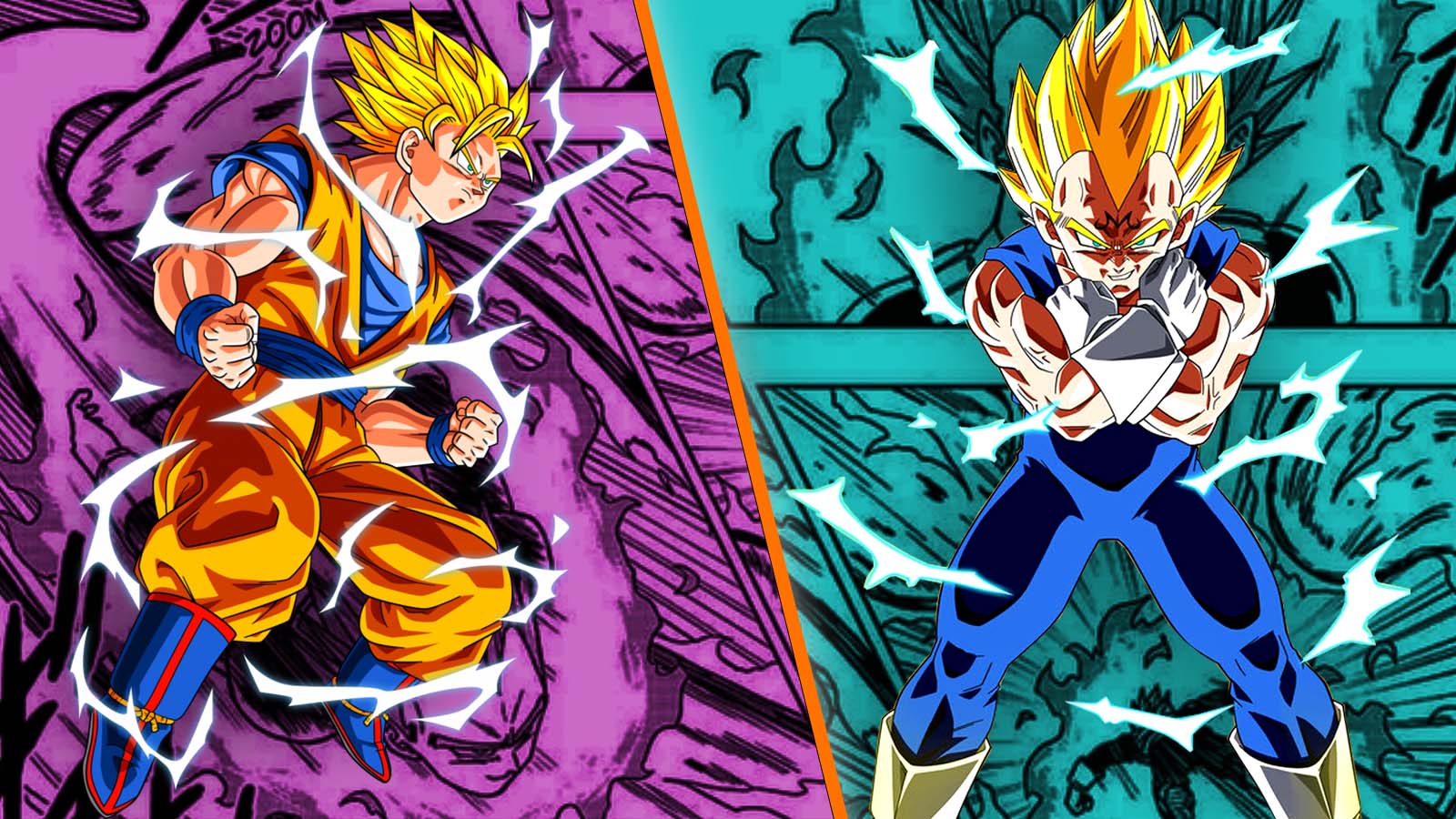 Dragon Ball Z was a popular anime that ran for nine seasons and a whopping 291 episodes. The story took place after the events of Dragon Ball and followed a Sayian named Goku and his adventures on Earth. The anime was mostly focused on fighting, with Goku and his fellow fighters usually pitted against more powerful foes that they have to overcome. One of these foes who ended up being in the entire series after the first season, as well as the sequel series Dragon Ball Super, was the Saiyan Prince, Vegeta.

Even though the two Saiyan warriors, Goku and Vegeta, started off their relationship as antagonistic, the two actually only fought twice in the entirety of Dragon Ball Z. There were, however, some other moments in the series that prove one may have been stronger than the other, but for now let’s look at their first fight.

Dragon Ball Z began with the Saiyan Saga. An alien visitor had crash-landed on Earth, Goku’s brother Raditz. Goku and Raditz hadn’t met and as a result, Goku finally learned that he was a part of a warrior race called the Saiyans. Part of their genealogy included having a tail, which allowed them to turn into a Great Ape whenever a Sayian looked at a full moon. Goku’s tail had been removed by Kami in the original Dragon Ball, meaning he could no longer turn into a Great Ape. Goku’s son Gohan, however, did grow a tail in the Saiyan Saga.

When Raditz saw that his brother hadn’t conquered the planet like he was sent to do, he fought Goku and the other fighters, including Piccolo. The resulting battle ended in Goku and Raditz’s death, but not before Raditz called two more powerful Saiyans to his position, Vegeta and Nappa. They eventually made it to Earth, while Goku had been training with King Kai in the Other World, where he learned the extremely powerful Kaio-ken technique.

After the fighters of Earth confronted the Saiyans and lost, Goku returned, resurrected by the Dragon Balls, to defeat Nappa and Vegeta. At that point four of the fighters had been killed, including Piccolo, and the only two who remained were Gohan and Krillin. Goku easily defeated Nappa, but he did use Kaio-ken to do it. Vegeta, insulted by Nappa’s loss, executed him. Goku and Vegeta’s first battle started here.

Even in their first battle, the two fighters seemed to be incredibly evenly matched. Goku did rely heavily on his Kaio-ken technique, tapping into Kaio-ken times four to defeat him. Just as Vegeta was due to lose the battle, he turned the tide by using an energy ball to substitute a full moon. Vegeta turned into a Great Ape, and this nearly killed Goku, taking him out of the fight. Vegeta was not stronger than Goku in his base form but his Great Ape form was much stronger.

In the end, Gohan, Krillin, and surprisingly Yajirobe, defeated Vegeta. It was Gohan turning into the Great Ape that nearly killed Vegeta, and Goku ultimately convinced Krillin to spare him, most likely because he wanted a rematch. The next time Goku and Vegeta fought would be years later after Goku died in the Cell Saga. Of course, Vegeta was alive and continued to push himself, but Goku’s wish was to stay dead, so Vegeta didn’t have the same motivation to get stronger.

Before Buu was unleashed in the Buu Saga, there was a World Tournament that Goku journeyed from the Other World to compete in, thus igniting Vegeta’s old motivations, and providing him with another opportunity to prove his strength against Goku’s. Unfortunately for all the fighters, the evil wizard Babidi, and the Demon King Dabura were set out to release the evil Majin Buu from his containment. Babidi needed energy to actually release Buu, so he took the power of multiple fighters to do it, and ultimately uses Vegeta to release Buu.

Vegeta fought to not be under Majin control but used this power to fight Goku, believing that this was the extra boost he needed to finally defeat Goku. During the fight, it was revealed that Vegeta still held his influence and that Babidi was not controlling the Saiyan Prince,he had only given him a boost to his power. A power which he used to fight Goku while they were both in their Super Saiyan 2 forms. Goku and Vegeta were neck-and-neck in this fight, trading blows and defending against each other. The fight ultimately ended in somewhat of a draw as Vegeta tricks Goku and knocks him unconscious then flies away to fight Majin Buu.

This does not mean that if the fight was drawn to its conclusion without any interruptions, Vegeta would have defeated Goku. At that point, it was likely that Goku and Vegeta in their Super Saiyan 2 forms would have been at somewhat equal power levels. Unlocking his evil Majin potential certainly boosted that, but again Goku was holding his own. What Vegeta was not aware of at the time was that Goku could tap into his Super Saiyan 3 form which definitely would have been stronger than Majin Vegeta. So for this fight, Goku was indeed stronger, especially considering how easily Vegeta was nearly killed by Kid Buu later in the Buu Saga when Goku put up more of a fight.

There were a few times in Dragon Ball Z where through some characters defeating either Goku or Vegeta you could determine their respective power levels without the two actually fighting. One of these moments is on the Planet Namek when both characters battled Frieza. Vegeta fought Frieza while Frieza was in multiple forms, but when he fought him in his final form it proved much too powerful for him. Before Goku joined the fight, Frieza killed Vegeta with a beam right through the chest. Goku ended the Frieza Saga by killing Frieza while Goku had transformed into a Super Saiyan, thus confirming that Goku was stronger at the time because Vegeta had not yet acquired that ability.

Why Goku would be stronger than Vegeta might only come down to one thing, Goku having extra time to train while recovering and journeying to Namek, while Vegeta was recovering and fighting lower-leveled members of the Ginyu Force. Even though Vegeta put up a fight, he spent a lot of time fighting characters who were too low-level, like Zarbon, and he spent a lot of his time on Namek flying around to find the Dragon Balls. Both being Saiyans they possessed the ability to grow stronger after death (or near-death) experiences, and they both had recently gone through one of these shortly before the Frieza Saga. The extra training seemingly increased Goku’s strength by a fair amount as he was undoubtedly stronger than Vegeta at the time.

The next time that proved one fighter was stronger than the other came with a caveat, Goku was sick. Goku knew in advance that he was to succumb to a Heart Virus, while the Androids attacked Earth. Trunks came back from the future to give Goku medicine developed to combat the virus in an attempt to prevent his death, change the future, and save the world. Even though Goku knew in advance that he would get sick, he didn’t know exactly when the Androids would attack the Earth, so Goku became weaker as his condition deteriorated before using the medicine to combat it. So during the Android battle, Vegeta was stronger than Goku.

Vegeta was stronger because since the Frieza Saga he had been training almost non-stop since leaving Planet Namek. He trained at a higher gravity level and had managed to become a Super Saiyan. Goku on the other hand trained after he got back from the Planet Yardrat, where he learned Instant Transmission, but trained less than Vegeta did afterward because of Vegeta’s motivation to surpass Goku.

Then, a while later during the Cell Saga, the two fighters both fight Cell in several different matches. The first occurs after Vegeta and Future Trunks trained in the Hyperbolic Time Chamber where one year’s worth of time passes in one day. After this period of time, it is acceptable to believe that Vegeta was more powerful than Goku at the time because Goku hadn’t gone into the Chamber yet, whereas Vegeta had become Super Vegeta, a powered-up version of his Super Saiyan form that was able to take out Semi-Perfect Cell. However, he allowed Cell to absorb into his final form, Perfect Cell, and was no match for him.

Goku, on the other hand, faired much better against Perfect Cell after spending a day in the Hyperbolic Time Chamber. He withdrew from the match with Perfect Cell, wanting Gohan to take over, and ultimately died sacrificing himself for Earth. Vegeta then was nearly killed by Super Perfect Cell but was saved by Gohan. Out of the two, it seemed that Goku was stronger than Vegeta before he died but only because Perfect Cell was holding back while they fought. We do not know if he was holding back against Vegeta as well, if he was not, Vegeta may very well have been stronger than Goku.

Ultimately, there were times when Vegeta was stronger than Goku in Dragon Ball Z, but because of the nature of their relationship, constantly wanting to out-train each other led to a constant back and forth over who was stronger, resulting in both Vegeta and Goku being the stronger Saiyan across multiple seasons. Of course, this relationship continued in Dragon Ball Super as well, fostering even more Saiyan camaraderie.