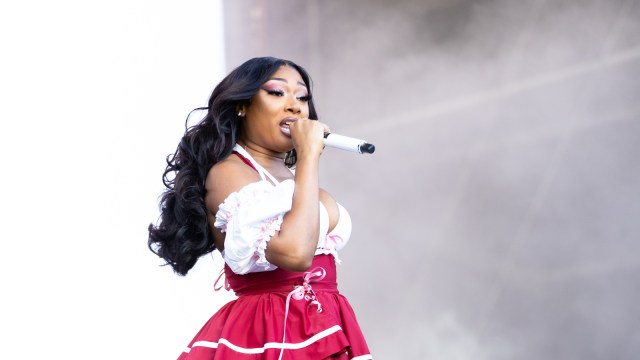 Anime culture in America was once only inhabited by “nerds” or “geeks,” with many ridiculing those who loved the genre and proclaiming them to be “weebs”, nowadays though that is no longer the case. Anime has grown into a huge cultural phenomen in recent years thanks in no small part to many famous celebrities coming forward and proclaiming their love for the Japanese export. Another celeb to have come forward as an anime lover is rapper Megan Thee Stallion, and her Halloween costume this year pays tribute to that.

During one of GQ‘s Actually Me videos on YouTube the artist answered a fan question on Twitter asking her what anime she watches. She responded, “I love My Hero Academia. I love Attack on Titan. I love Bleach. Of course, I love Naruto,” continuing, “I’m watching Black Butler right now. I’m watching Black Clover too.” This Halloween she took inspiration from one of her aforementioned favorite anime and dressed up as a character from My Hero Academia, Rabbit Hero: Mirko.

The rapper went all out, not only with her costume but with an accompanying photo shoot where she showed off her look and replicated some of the poses of the animated hero complete with graphics similar to the show as well.

The character appeared in episode 87 of the series, sitting as the fifth strongest hero on the show and the strongest female hero she is impressive to watch. Her powers are based off of those of a rabbit, with super leg strength and super hearing, she is able to move with exceptional speed and is also willing to risk her life for the betterment of society.

Megan Thee Stallion does look phenomenal as the character, complete with long white fluffy ears and long white hair to go along with her superhero costume, which in true anime form, leaves little to the imagination. Fans were thrilled at the look, earning the artist a tonne of praise for her knockout costume.