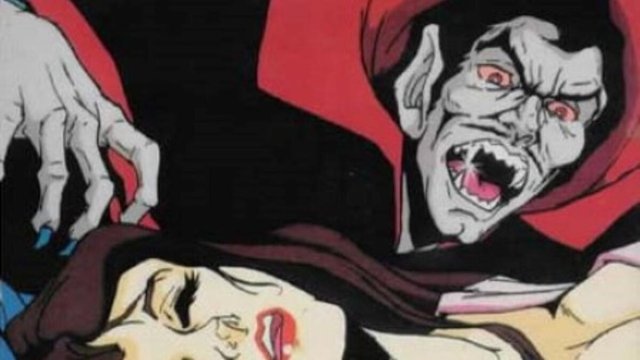 Recent fans would be forgiven for thinking that Morbius — the film based on Marvel’s “Living Vampire” character that was Sony’s latest entry in the “Spider-Man Movies That Don’t Actually Feature Spider-Man” — is the worst, most embarrassing vampire movie to come out of the Marvel Cinematic Universe. They would be wrong.

Kineko Video has fully restored and is set to release noon PT on Halloween 2022, a 1980 Marvel embarrassment that makes Morbius look like Captain America: Winter Soldier. The movie is called Dracula: Sovereign of the Damned, and it was based on The Tomb of Dracula, a Marvel title that ran from 1972 – 1979.

In 1980, Japanese anime studio Toei Animation released a TV movie version, titled Yami no Teiō: Kyūketsuki Dorakyura, (which translates to “Emperor of Darkness: The Vampire Dracula”), which was released in an English language dub in 1983 in the United States under the Sovereign title.

While a VHS scan was put up on YouTube eight years ago by The Bad Anime Club, Kineko — which describes itself in its Twitter bio as a “Professional fan-based community specializing in anime film scanning/video transfer” — has spent the time and money to produce a new, subtitled 4K scan of the original 16mm film print. As Kineko says in their YouTube description:

“In the very first animated movie ever based on a Marvel comic, Count Dracula, lord of vampires and the sovereign of the damned, steals away a bride intended for Lucifer. Not only does this anger his dark creator but also a satanic cult and his fellow vampires. He finds that the sins of his past will not allow him to live a normal, mortal life. Events become complicated when he comes under attack from all sides, including his vampire hunting great-grandson and the children of others he murdered long ago.

This 16mm film was acquired by MartyMcFlies of LonelyChaser, and was scanned in 4K. It was also color corrected and touched up by us. The first reel unfortunately ended up being very moldy, reproduced as a blue-ish pattern over the film, and this could not be fixed, along with some heavy scratches running down the film in the first reel. The audio was sourced from the optical sound track on the film itself. This is likely the best this film will ever look, as neither Marvel nor Toei have seemingly any interest in acknowledging its existence.”

Hopefully this will open the door to other 4k restorations of terrible movies based on Marvel titles, including possibly a version of Morbius that has an ending.