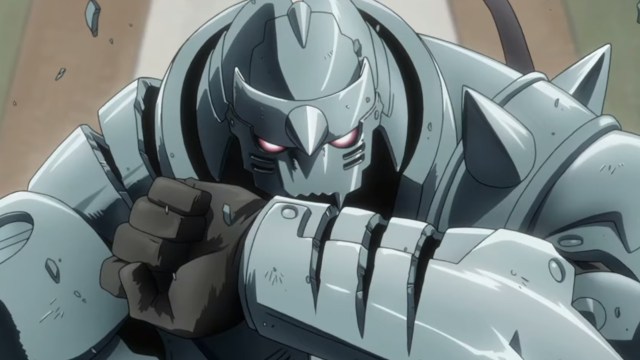 Fullmetal Alchemist: Brotherhood has topped most lists for best anime since its release in 2009. Known for its strong storytelling, incredible world-building, and emotionally intelligent messaging, it topped MyAnimeLists’ best anime for a whole decade, a testament to the brilliance and popularity of the show. Much of its popularity comes down to just how well written the characters are, and this list will explore the strongest characters within the Brotherhood universe.

Set in a somewhat fantastical world that melds science and magic, in Brotherhood certain individuals can train to become alchemists. With a deep scientific knowledge of chemical composition and harnessing the ability to transform matter so long as the rule of equivalent exchange is followed, alchemists are capable of wielding great power. The story follows alchemist prodigies Edward and Alphonse Elric as they hunt for a way to restore their bodies following an attempt at the taboo human transmutation.

They discover that to overcome the rules of equivalent exchange, they will need the power of a philosopher’s stone, but this power comes at a price. Whilst researching they uncover a huge nationwide conspiracy, going back to the founding of the country of Amestris and the very teachings of alchemy itself. The brothers, along with others, fight against malevolent shadowy figures as they attempt to expose this conspiracy, hardly knowing just how deep it truly runs.

Now let’s take a look at some of the strongest characters scattered throughout Fullmetal Alchemist: Brotherhood‘s brilliant story.

The youngest of the Elric brothers, Alphonse is an exceptionally capable young alchemist just like his older brother. In terms of physical strength, Alphonse is stronger than Edward thanks to his armored body but even prior to the suit, Edward stated that he could not defeat Alphonse in hand-to-hand combat.

He uses more conventional and clean alchemy than his brother but is shown to be more creative when pushed. For the majority of the series, Alphonse cannot utilize the same ability as Edward — creating transmutations without a circle — but once he recalls his journey through the gate, he too gains the ability. The only thing that places him fractionally lower than Edward is, despite both having extreme intelligence, his brother slightly beats him in that field.

Edward Elric — aka the one and only Fullmetal Alchemist — is an alchemy prodigy and a strong fighter to boot. Having trained alongside his brother under Izumi Curtis, Edward’s natural talents are honed and sharpened, allowing him to take the State Alchemist test and become the youngest State Alchemist ever at the age of 12.

He is not as strong in combat as his younger brother, but he is more creative and can incorporate his opponent’s tactics for his use, making him a flexible and resourceful fighter. Though he’s experienced many losses against strong enemies, he also has several wins against ridiculously overpowered opponents that even his superiors would have struggled against. He is one of the few alchemists to have seen the Gate of Truth and can therefore perform alchemy without a transmutation circle, making his attacks all but instantaneous.

One of the homunculi created by Father, Greed embodies his namesake. He wants everything: money, women, and even eternal life. Despite his greed, he still cares about his subordinates, which makes him less despicable than some of the human characters in the series. He is the only homunculi to defy their Father as he seeks his own life and choices.

Greed is an exceptional fighter and can also harden his skin to become near impenetrable to standard weapons. On top of his carbon skin, Greed also boasts regenerative abilities, superhuman speed, and strength. Greed becomes even more powerful when he shares a body with the prince from Xing, Ling Yao, given that Ling is also a formidable fighter, which allows Greed to take on his daunting sibling Wrath.

A survivor of the Ishvalan war, Scar swears revenge on those responsible for the slaughter in his homeland and the death of his brother. He was trained as an Ishvalan monk and is more than proficient at hand-to-hand combat, able to easily take on Edward and Alphonse in their first fight.

Scar utilizes alchemy through an intricate tattoo on his right arm that enacts the first two elements of alchemy — comprehension and deconstruction. Basically, he can destroy almost anything with his right arm. In fact, he uses his “cursed right arm” to murder 10 State Alchemists for their role in the Ishvalan Civil War. It’s later revealed that his left arm also harnesses tattoos, these ones allowing him to reconstruct as well, making Scar into an alchemist in his own right.

Just a “housewife,” Izumi Curtis is one of the strongest alchemy users out there, as well as a fierce fighter, and one of the most badass women in all of anime. Izumi trained Edward and Alphonse when they were just children, and taught them her creed “All is One. One is All.”

She is a self-taught alchemist, making her skills all the more astounding as she manages to easily overpower even well trained State Alchemists. To top it off, she is incredibly strong — we see her brute strength displayed when she is easily able to throw the huge homunculi Sloth around, much to the surprise of the perpetually powerful Armstrongs. Like the Elric brothers, she is also able to use alchemy without transmutation circles, thanks to a botched attempt at human transmutation.

Colonel Roy Mustang is one of the strongest State Alchemists in Brotherhood. He wields knowledge of flame alchemy, a hazardous and guarded form of alchemy that few people have ever attempted. He can wield flame in combat by simply creating a spark, accomplished by snapping with “ignition” gloves emblazoned with a transmutation symbol. Though he appears arrogant and self-important, he is also fiercely loyal, consistently using his strength to protect the people he cares about even when it costs him.

Mustang’s incredible strength is on full display when he faces off against the homunculi Lust and Envy, both of whom perish in his flames. His defeat of Envy is particularly brutal — and well deserved — as Mustang uses pinpoint precision to burn out their tongue and eyes, snapping his fingers repeatedly until the cruel homunculi is nothing but a shrunken worm. Mustang is not to be messed with.

The only human homunculi, Wrath is a philosopher’s stone forced into a human body. That body was designed and trained to become Führer King Bradley, ruler of Amestris, by Father, who sought a puppet through which he could enact his will. Even before he absorbed the philosopher’s stone, Bradley was trained in combat, military rule, and politics.

Of all the candidates to be trained, Bradley survived a horrific treatment that imbued him with enhanced abilities that gave a boost to his power and speed. To top it off, his homunculi ability gives him the power of precognition, which allows him to see his opponent’s moves just before they make them. His ultimate downfall only comes after numerous brutal fights with several of the other characters on this list. He is one of the most popular villains of the show and often ranks on best anime villain lists.

Father’s right-hand and the very first homunculi, Pride is over three centuries old and is considered the strongest of the seven homunculi. Taking the form of Selim Bradley, King Bradley’s young son, Pride is able to fool everyone he interacts with. Lurking under the guise of a sweet boy is a true monster of shadows, however, one that even the other homunculi have reason to fear.

Pride is boastful, arrogant, and cruel; he enjoys taunting others and sees humans as beneath him. The only person he appears to respect is Father, his creator. Pride is able to expand beyond his “container” (aka body) to observe large swathes of territory via his natural form, one of jagged shadows coated in eyes and teeth. While he does have a few weaknesses, to things like flash bangs or complete darkness, Pride teaches the characters in Brotherhood to fear the shadows that he rules.

Van Hohenheim is one of the oldest characters in the Brotherhood story. In fact, he even surpasses Father in this category, as the source of the blood used to create the Dwarf in the Flask in the first place. When the people of Xerxes are consumed to create a philosopher’s stone and free the Dwarf, Van Hohenheim is also imbued with the power, joining the Dwarf as a philosopher’s stone in human form.

Van Hohenheim contains not only the power of the stone, but also hundreds of years of alchemical knowledge. He is easily the most powerful and knowledgeable human alchemist in existence. He is able to not only perform alchemy without a transmutation circle, but he can do so without even moving. Due to the power contained within him, Hohenheim heals rapidly and does not age, making him basically immortal. He spends a good chunk of his life working in the shadows to counter Father’s plans, allying himself with the souls within him instead of using them like a power source.

1. Father — The Dwarf in the Flask

The big bad of the show is the first ever homunculus, an alchemical creation made in part from Slave 23 (Van Hohenheim)’s blood. Once he also absorbs the Eye of God — the essence of what lies beyond the Gate of Truth — he is nigh unstoppable. After he escapes the confines of his flask and absorbs over half a million souls from Xerxes, this character becomes the most powerful user of alchemy to ever live.

With his new form, power, and immortality, Father builds up the military state of Amestris over centuries. He does so with malicious intent, aiming to create an even larger version of the lost city so that he can sacrifice millions and absorb God itself. Once he achieves this end, and absorbs God, Father gains control over all matter. His desire to obtain the knowledge of God, paired with his immortality and power, and firm dedication over centuries as he slowly works to accomplish his aims, makes Father one of the most dangerous villains in all of anime.

Truth, or the being before the gate, also identifies itself as God, and thus is clearly one of the most powerful beings in Brotherhood. Whenever an alchemist tries to break the boundaries of alchemy, they are taken to task before the gate and Truth, where they are forced to make a sacrifice for their hubris. Truth essentially punishes them for trying to play God.

Truth upholds the laws of the universe and punishes anyone who tries to break those laws, but it is fair and wise. Though Father does absorb God for a short time, he is eventually defeated and God is set free. Truth, as usual, gets the last laugh.

Fullmetal Alchemist: Brotherhood remains one of the best anime out there, retaining fans’ love and admiration over more than a decade. It is available to stream on Crunchyroll and Hulu, and for some viewers on Amazon Prime, leaving fans with plenty of options to enjoy the stellar series.